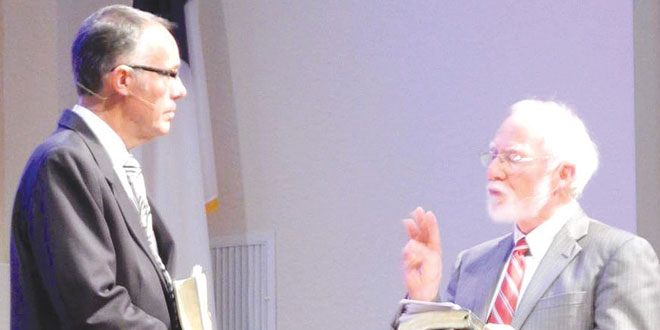 December 29 was a homecoming of sorts for the folks at Marco Presbyterian Church as they installed the Rev. Dr. Steven Schoof as their new senior pastor — a time to celebrate Schoof’s call and God’s plan for their church.

Schoof, a missionary to Australia, has been associated with the church for 26 years and would return periodically for the church’s Missions Conferences. He joins Associate Pastor Rev. Jan Werson, a former naval flight officer and flight instructor with 28 years in ministry including 12 as a navy chaplain. Werson came onboard in 2012. The church’s former Senior Pastor Rev. Bill Lyle, who had served the church since 2008, returned to Tennessee to be with family in the spring of 2013. Schoof is the third senior pastor to serve the church. Both Schoof and Fiol both served briefly in the states before going overseas. Fiol served in India from 1966-1983.

Schoof did his undergraduate work at Covenant College, Lookout Mountain, GA, and received both a masters and doctoral degree in ministry from Westminster Theological Seminary, Glenside, PA. His ministry began in 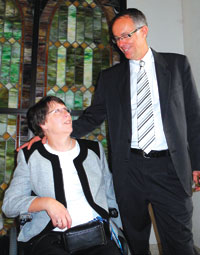 Beth and Rev. Dr. Steven Schoof pause for the camera at the conclusion of his installation service as Marco Presbyterian Church’s new senior pastor.

1979 with the start up of New Life Presbyterian Church, Virginia Beach, VA. After the move to Australia, he started a church in Penrith. This was followed by eight years in Canberra for another church start. During his last 16 years, he served as lead pastor for a church in Perth while maintaining a leadership role with Mission to the World, the missionary arm of the Presbyterian Church in America assisting with churches in Indonesia and Malaysia. The church in Perth had grown considerably, and is now multinational with 28 nations represented.

Schoof’s college sweetheart and wife, Beth, joins him in his ministry. Despite a spinal cord hemangioma that was discovered while in college, which causes debilitating pain and confinement to a wheelchair, Beth mentored young women and encouraged the senior ladies and widows in the Australian church. They both enjoy reading, studying the Bible, praying and discovering native orchids together. Among church leaders Schoof is known as a humble man with a gracious spirit, who listens and loves well.

“The Lord has done an outstanding job preparing Steve for the ministry at Marco Presbyterian Church,” said Fiol. “He has a heart for the Lord, people and the Word.”