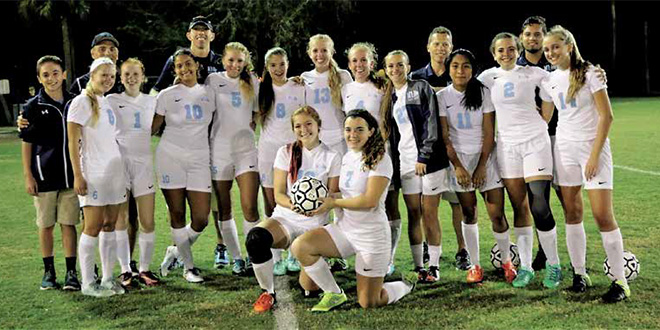 Photos by Barry Gwinn: Lady Rays pose in new uniforms after an impressive 8-0 win over Seacrest. The uniforms are a reflection of their success this year – and it shows.

In the short time that they have lived here, Dinos and Marianne Iordanou have managed to add some swagger to the boys and girls of the Marco Island Academy (MIA) soccer teams, as well as bringing order to some athletic events at Winterberry Park.

When they moved here from Mill Neck, NY in 2014, they didn’t know a soul on Marco Island, but expected a calmer, more laid back lifestyle. “We just wanted to escape the fast pace [of suburban New York City] and relax a little,” Marianne explained. “Something was always going on.” Mill Neck is close by Jamaica, Queens where Marianne grew up. The pace there is frenetic. It was more so for Dinos and Marianne. Dinos is the CEO, chairman of the board, director and president at Arch Capital Group, a company based in Bermuda, which writes insurance and reinsurance on a global scale. While Dinos was busy running the company, Marianne dedicated her life to raising their three girls.

Education and athletics have always been important to the Iordanous. While in New York, Marianne joined the board of Our Lady of Mercy Academy (OLMA) in nearby Syosset, a private school of 483 girls. She was soon chairing fundraising events for the school, which resulted in raising millions for new soccer and lacrosse fields, as well as a technology center. “I felt that the girls were not getting enough support in STEM (science, technology, engineering and math),” she said, “We had some wonderful math students, who could make a substantial contribution to our economy if given the chance.” In 2014, with their daughters gone, and projects at OLMA completed, Dinos and Marianne looked south – time to relax a little. At least Marianne thought she’d get a break. Dinos had to run Arch Capital, which would still require a lot of his time.

It wasn’t long before Marianne starting looking around for something to do on Marco Island, “I get bored real easily,” she said, “I need to be doing something.” A mutual friend introduced her to Jane Watt, the peripatetic Marco Island Academy board chairman. A meeting with Watt soon followed. Marianne quickly found that there was plenty of ways to help on the island. Watt’s presentations to potential school supporters are served up with warmth, enthusiasm, and genuine pride in the school. They begin with a briefing on MIA’s curricula, goals and accomplishments, and conclude with a tour of the school. “During the [meeting with Watt] 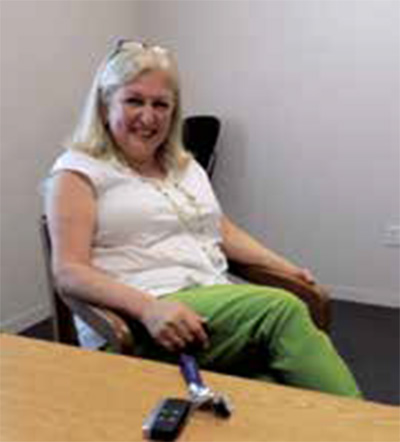 I wanted to find out what the school needed the most,” said Marianne, “After touring the campus, I realized that they needed everything. I wanted to help but where to start?” Then, while attending an early fall football game, she was startled to see the referee running around hollering, “Stop the clock! Stop the clock!” Melissa Scott, MIA’s principal, ran up to the referee exclaiming, “It doesn’t work! It doesn’t work!” “That’s when I knew where to start,” said Marianne. The portable scoreboard had been purchased four years ago for MIA’s first football season. It had to be lugged out for each game and stopped working properly in August 2016.

Watt wasted no time in trying to rectify the situation. She met with Alex Galiana, the City of Marco Island Parks and Rec facilities manager, and asked what could be done. Galiana told her that the portable scoreboard needed replacing with something more permanent. Galiana, who had bought scoreboards in the past, told Watt that it would cost about $15,000 to do it right. “Let me see what I can do,” Jane replied. After Marianne showed up to witness the malfunctioning clock, things moved fast.

“Arch Capital has a ‘donating arm’ dedicated to approving and donating to worthy charities,” Marianne said, “High schools are high on the list. They can set the tone for the rest of a student’s life. Athletic programs are important to accomplishing this.” Dinos quickly agreed to a donation of $7,500 from his company, and the Iordanous made a personal donation of $7,500 for the rest. With the money situation in hand, Galiana coordinated the purchase and installation of the scoreboard, a formidable task. “I could see where this scoreboard would be a tremendous addition to athletic events for MIA, MICMS, Men’s League, and to Little League and possibly other games.” Galiana said, “It was significant that MIA would make a gesture like this to the community.” Galiana quickly concluded successful negotiations with Electro-Mechanical Corp. for the scoreboard itself. LCEC donated the installation of the posts supporting the scoreboard, and Affordable Landscaping donated the trenches for the electrical wiring. That done, Galiana referred Electro-Mech back to Watt for final design. Along with Marianne Iordanou, the MIA staff designed the scoreboard, incorporating the MIA logo as well as a sign proclaiming “Home of the Rays.” MIA is Marco Island’s only high school. The scoreboard should be a source of pride for the entire community. The whole thing was up 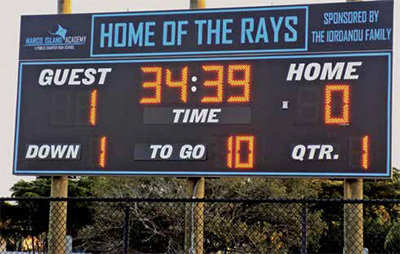 Winterberry Park’s new scoreboard, made possible by donations from Arch Capital Group and Dinos and Marianne Iordanou. The city’s Parks and Recreation Department facilitated the purchase and installation.

and running by Oct. 21, in time for senior night. This was warp speed, even for Watt and Galiana. “It makes a huge difference having a personalized scoreboard at our fields for football and soccer,” says Kelly Monnot, MIA’s athletic director, “It now makes our ‘home’ game fields feel like MIA.”

Actually, Marianne had started brightening up the Winterberry playing fields over the summer, before the scoreboard, when she and Dinos donated almost $4,000 for new MIA soccer uniforms. Last June, she had inquired as to the state of the girls’ soccer program and found that they were wearing old basketball uniforms, with t-shirts underneath. The boys’ uniforms were no better. “The uniforms were shabby and worn,” she said, “I was told that this year the teams were going to be much improved and were quite spirited and competitive. I wanted them to look the part.” MIA Athletic Director Kelly Monnot spearheaded the uniform acquisition. It involved a makeover of the school colors and logo. She describes it best in her own words:

“The soccer uniforms were donated over the summer and I picked out the Nike-style uniforms with the approval of Marianne and the coach. She wanted to make sure we had our new logo embroidered on the uniforms, so I had that designed on the front corner of the jerseys. I then thought it would look nice to have Rays on the back, which we have on many of our other jerseys. We also wanted to make sure the shorts had the numbers on them. Additionally, Jane and I decided when redesigning our logo over the spring and summer, we wanted to move away from black and replace our dark color with navy. Our official school colors are Columbia blue, white and gray, which you will see in the uniforms. Our dark color we now use is navy, so now all of our away jerseys are navy. This was the first set of uniforms we purchased with the new logo and colors.”

Marianne was welcomed to the MIA board of directors last year. Since that date, she has volunteered nonstop. She is currently co-chairing the Bill Rose Memorial Clay Classic with Brenda Rhinehart. The event will be held at Port of the Isles Gun Club on 1/21/17. This is an important MIA fundraiser. Quite a lot has happened since Marianne and Dinos came to town. Fortunately for the kids at MIA, the Iordanou’s love of athletics has helped put MIA athletics on the map.