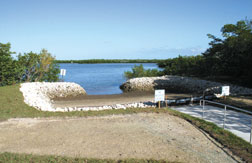 The state of Florida, Collier County Parks and Recreation and Rookery Bay National Estuarine Reserve have teamed together to create a new park in Collier County. The Isles of Capri Paddle Craft Park, located on the corner of US-951 and Isles of Capri Boulevard is slated to open by March of this year. With only the finishing touches left, the park will have much to offer both Collier County residents and visitors.

The park, which sits at the entrance to the Isles of Capri, will feature two open-air pavilions and public restrooms. Its greater purpose, however, will be to serve as a launch site for canoes, kayaks and paddle boards into McIlvane Bay. The bay “is a great location to access Rookery Bay Reserve as long as it is done in an environmentally safe way,” explains Randy McCormick, Environmental Manager of the Department of Environmental Protection at Rookery Bay, as well as Project Manager of the park. McCormick, who has worked on the project from the beginning adds. “The

public can enjoy the area in a quiet and peaceful way,” as motorized water craft will not be permitted.

The finalization of the Isles of Capri Paddle Craft Park has been a process over fifteen years in the making. The ecologically delicate land was originally considered for condominium development. Due to the sensitivity of the area, the land was purchased under the Preservation 2000 (P2000) Act, which is now known as Florida Forever. This program, funded by the State of Florida, purchases environmentally sensitive land throughout the state.

The Rookery Bay National Estuarine Research Reserve is estimated to contain over 110,000 acres of nearly pristine subtropical mangrove forest. One of only three estuarine reserves in the state, it is managed by the Florida Department of Environmental Protection’s Office of Coastal and Aquatic Managed Areas. The Rookery is also administered by the National Oceanic Atmospheric Administration (NOAA). These partnerships are essentially how the land came to be acquired and developed.

While the State of Florida owns the land, Rookery Bay monitors it and

cares for it. Their first concern 15 years ago regarding the purchased land was the desperate need for mangrove restoration on the property. A grant from NOAA provided for a successful restoration of the devastated mangrove area.

Once this process was complete, the State of Florida provided the funding to build the park. With only a few inspections remaining, the park will soon be open to the public.

It will be sub-leased, however, to the Collier County Parks and Recreation Division as a county park. “The county has the expertise on managing parks,” explains McCormick. However, “there is a management plan within the sub-lease which states how the park should be treated as it is environmentally sensitive,” he adds.

The partnership created among these organizations has not only saved an environmentally sensitive area but it has also given the public a chance to enjoy the enchanting ecosystem that is Southwest Florida through the creation of The Isles of Capri Paddle Craft Park.

To learn more about the Rookery Bay and its many partnerships visit www.rook erybay.org