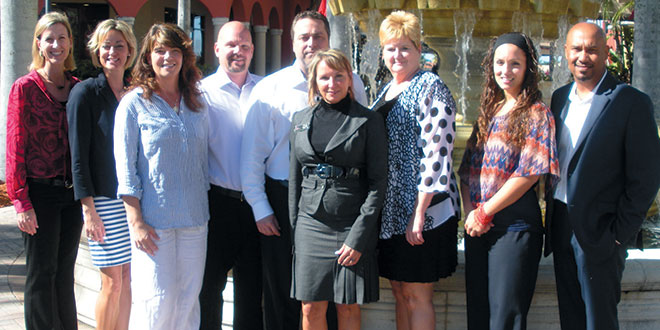 Marc Creach thought a fresh approach to networking that stressed fun and community service might just work on Marco Island.

It’s a concept that he discussed with some friends and colleagues earlier this year, a chat that led to the formation of the ConnectivityMe networking group.

“The reason why we wanted to establish and create ConnectivityMe was for a group of professionals to connect with other professionals from various industries in event-based activities,” said Creach, a mortgage lender with Marketplace Home Mortgage on Marco.

Building business relationships through fun activities like kayaking, professional growth through seminars and leadership training classes, community service projects and being a partner in community events all fall under the group’s umbrella. So does working with local charities.

“Whenever we can do things to help others, that (effort) will also give back to us,” said Creach. “That’s why we established the organization.”

Creach and Griesse, a team leader/CEO at Keller Williams Realty on Marco, were members of a similar networking group in Columbus, Ohio, before both found their way to Marco.

“We’re a mix from the community,” said Lambros, also a realtor with Keller Williams. “You have realtors; you have mortgage lenders. The director of Marco Island Academy (Watt) is in our group. You have restaurant owners. Everyone can join because there’s no charge.”

Lambros compared ConnectivityMe to Facebook, in that anyone can take part. “It’s for all walks of life,” she added. “We’re providing platforms where people can meet and hopefully grow their business.”

Thus far, the group has held three events for members, most recently the Dec. 20 appearance of Dueling Pianos at the Mrozinski’s Marco Island Fish Company.

JJ Mrozinski said he and his wife, Stacey, joined the group because, “It’s a great networking program for young professionals in our area. It’s great what they do for the community in giving back and the networking.”

“With my being affiliated with the school, it’s important because we want to support as many local businesses as possible, because many of them support us,” said Watt. “It’s really about the Marco Island community and being part of something that is exciting, new and good for everyone. This is a group that is promoting our local community and giving business to the people that live here.”

Aligning with existing groups and businesses in the community is also a focus, said Lambros. ConnectivityMe is also looking for sponsors, not just for monetary contributions, “but businesses we can align with as sponsors to market each other and grow each other.”