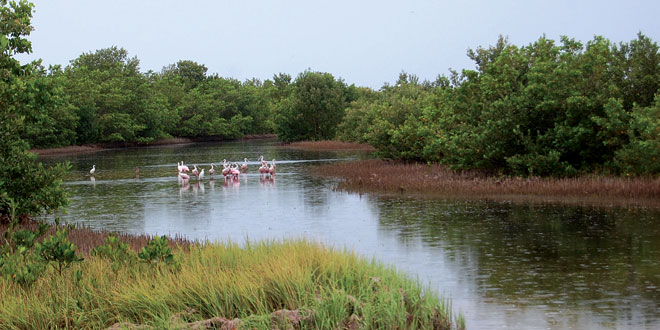 The tide — and name — may be changing for Tigertail Beach and Sand Dollar Island.

At last week’s Marco Island Planning Board meeting, Collier County’s Director of Parks and Recreation, Barry Williams presented an outline of current and proposed improvement projects slated for county-owned Tigertail Beach Park. A part of the state-owned Big Marco Pass Critical Wildlife Area (CWA) and a bird watcher’s paradise, this area encompasses Tigertail Beach and its lagoon, as well as Sand Dollar Island. The former sand bar has wrapped itself around the CWA and become a Gulf of Mexico beach.

The focus of the county’s presentation was how to improve Tigertail Beach Park to “entice” more residents to use it, but the discussion quickly turned toward the topic of the natural character and uses of Tigertail Beach and Sand Dollar Island. Gary McAlpin, Collier County Coastal Zone Department Director, indicated that “nobody ever expected (Sand Dollar Island) to attach itself to the critical wildlife area. Mother Nature is giving you a signal on the north side.”

The signal for some: a name change for the two areas. “Would it not be easier to do a little name change to Sand Dollar Beach and Tigertail Eco-Park?” asked Linda Turner of Marco Island Eagle Sanctuary.

While the Collier County Board of Commissioners ultimately will mull over this idea, Williams’ presentation was made to help Marco Island solve a serious issue. Last season, Collier County’s South Beach access had major parking overflow, which resulted in conflicts over parking between beach goers and Marco Island residents. With growth and development figures projecting 20,000 new residents in the 951 corridor in the next 10 years, the Planning Board asked Collier County to step up and help handle the pressure.

In June, Bill Trotter and City Councilor Amadeo Petricca visited Tigertail Beach and created a list of necessary improvements. The list included lowering the entrance fee from $8 to $4; improving direction and informational signage outside and inside the park; improving and paving the parking lot; trimming vegetation back over the accesses; renourishing the beach area in the park; maintaining trash bins on Sand Dollar Island; putting a boardwalk over the lagoon; and providing a tram for beach goers to the Gulf of Mexico.

While most everyone agreed the parking fee should be tweaked and signage improved, the renourishment of Tigertail Beach, the tram and the boardwalk over the lagoon were the hot topics. “We need to set expectations,” explained McAlpin. “We cannot put sand on (Tigertail) beach. We tried five years ago, and the Florida Department of Environmental Protection would not grant the permit.”

The tram raised some eyebrows mostly because of possible disturbances to nesting birds and other area wildlife. Talk of a boardwalk over the lagoon, though, fueled heated discussion. Officials from the U.S. Fish and Wildlife Service, the Florida Fish and Wildlife Conservation Commission, Florida Wildlife Federation and The Conservancy of Southwest Florida were clear that a boardwalk would never be built over the lagoon.

“The boardwalk is one of the most contentious issues, and this comes around every so many years. It is something The Conservancy opposes,” said Nicole Johnson, director of policy for The Conservancy. In fact, she noted, a feasibility study was done in 2004 to examine the possibility of a boardwalk over the lagoon.

“It is not feasible, not permitable, and it just can’t happen…Let’s just go ahead and get the boardwalk off of the table,” Johnson insisted. “After all,” she added, “what Collier County and Marco Island were really dealing with here is an eco-park”.

Planning Board Member Marty Roddy thought so. He made an ancillary presentation, focusing on the environmental and educational importance of Tigertail and Sand Dollar. “We have a choice to have a beach beach or an eco-beach,” he said. “Once you have made this decision, you cannot turn back.”