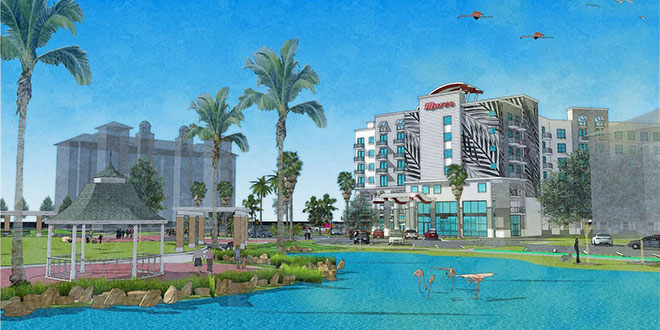 The Marco Island Planning Board is about to undertake a review of a major project which may continue to enhance the Town Center District of the island. Earlier this year Hendricks Commercial Properties Group received approval for an upgrade of its property known as the Island Plaza at the corner of Bald Eagle and North Collier Boulevard.

Small Brothers Marco, LLC is now proposing to build a hotel in the Town Center District of Marco Island. The location for the 165 room hotel would be on land that has previously been used as the staging area for the construction company building the new Herb Savage Bridge. The combined parcels are located at 580 Elkcam Circle and 870 Park Avenue on the island across the street from Winn-Dixie.

In addition to the 165 rooms, a 4,000 square foot restaurant, a rooftop pool, pool deck and an enclosed private garage will be part of the proposed development.

“We are extremely pleased to bring this project to the city for its approval,” said Patrick Neale, spokesman and representative for Small Brothers, which is an affiliate of Cleveland Construction, who will manage the construction of the new facility. “This project is in line with Marco Island’s reputation for being one of the top quality communities in all of South Florida and will enhance the 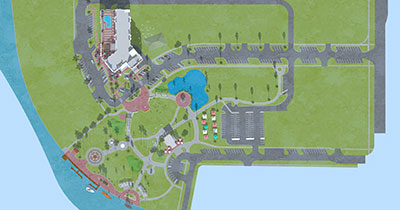 As part of the vision for the project, Small Brothers is proposing to construct a “significant” amount of public parking to support activities that are run at the local park. They will also be looking at improving pedestrian and bike access to the park in addition to providing a band shell for the community and a waterfront boardwalk in Veterans Community Park.

These improvements in public parking could also help alleviate some of the parking woes which have plagued the city and businesses over the last two seasons in the Town Center District and have been part of ongoing discussion at the Planning Board and City Council level.

The cost for the capital improvements to the park and parking upgrades will be borne by the developer, according to city staff.

The plans provided to the Coastal Breeze News also showed other capital improvements and enhancements within the park that will be discussed during the developer’s presentations to the city planning board. The developer is proposing a Planned Unit Development (PUD) amendment to the city’s planning board that would encompass the enhancements to the Veterans Community Park and the building of the new hotel facility.

The Planning Board will meet at 9 AM on Friday, September 2 to hear from the representatives of the developer. Check Coastal Breeze News online for developing stories on this and other breaking news at www.coastalbreezenews.com.