New Council members ready to get down to business 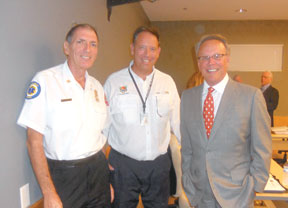 “All politics is local.” So said Tip O’Neill, the second longest serving speaker of the US House of Representatives in reference to the only political race he ever lost: a run for city council. It’s a trivia tidbit that speaks volumes for the aggressive politicking that seems to take the island by surprise each election season. The newly elected council members are about to take on the challenge of trying to set public policy for the next four years, so we asked them how they plan to get started now that the dust has settled.

Responses from two of the new City Council members follow to continue with input from the others in the next edition.

1. What do you feel, will be your three biggest challenges when it comes to governing the city and communicating with your constituents?

• Changing the role of Council; I view Council as the same as a Board of Directors of a corporation whose role is to set the direction and agenda for how a company should operate, and hire the officers (or managers) to execute the plan; we’ve been operating for far too long in an environment in which the managers are managing the Board.

• I’m not sure yet what the rules are, but I am hopeful that I will be able to continue my Newsletter as my time at the polls really reinforced that too many in our community don’t pay attention, but obviously those who do voted accordingly, thus I’d like to expand the communications network to all of Marco.

• I think this election demonstrated that our citizens want to be involved and we need to make them feel that they’re input is welcome, especially at Council Meetings.

2. You are now responsible for a wide variety of crucial city committees. How do you plan to approach appointments to these committees? Do you have specific candidates in mind and/or specific goals you would like to see within these committees?

Personally, I would be in favor of setting a date in the near future at which all committee terms expire, thereby allowing the incumbent Councilors to reappoint, 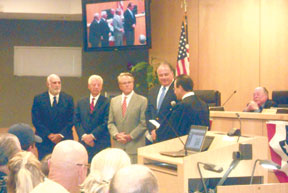 if they wish, their appointees, and the new Councilors to submit their candidates. I believe this would be more fair to all who are currently serving, and give a greater opportunity to those who might like to serve but have never really had the chance to do so.

3. If you could create your own agenda for your first City Council meeting, what are the first items of city business that you would address?

Number 1 on my list would be to both set-up some ‘open-microphone’ Town Hall formats to let the people speak on what their issues and concerns are and at the same time seek to pursue getting bids on the type of surveys that Ken Honecker has been trying to get Council to follow for the last several years.

Secondly, we need to put to rest the issue of the Mackle Community Park; I’ve seen the business plan, would like to see it presented to the Community and if there is enough interest via an informal straw poll or something of that nature, make it a referendum as the people are very concerned about this; at the same time we should address other issues that the people have expressed concerns about such as the Mid-town Development, the proposed convention center, North Marco’s parking problem, etc.

1. What do you feel will be your 3 biggest challenges when it comes to governing the city and communicating with your constituents?

As for governing the city, (1) we need to work extra hard to bring the City Council, first, and the city as a whole, together. There are too many divisions, most or all of them unnecessary because we have a common goal of preserving a wonderful way of life on Marco. (2) We need to provide services more efficiently and productively, to reduce nondiscretionary expenses. (3) We need to prioritize our needs and desires (park buildings, bridges, etc.) because we cannot afford them all.

As for communicating with people, that was a big part of my campaign. I’ve pounded the pavement, met literally thousands of people, and I intend to continue to seek out opinions and listen 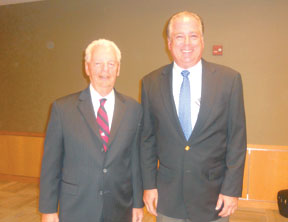 Amadeo Petricca with Ken Honecker who was named the new Council Vice Chair.

when they’re offered. I also want to take advantage of the various surveys, especially MICA, and new ones if some of my fellow councilor Ken Honecker’s ideas get traction on the council. I do feel a need to give citizens more of a “heads up” about matters as they work their way through boards, committees and the government, but I haven’t thought enough about how to do that, and I’d like to discuss that in open session with my colleagues first as well.

2. You are now responsible for a wide variety of crucial city committees. How do you plan to approach appointments to these committees? Do you have specific candidates in mind and/or specific goals you would like to see within these committees?

The city solicits expressions of interest from citizens who want to serve on boards and committees, and I encourage anyone who has an interest to make it known through the city’s process, when that gets underway. (It will be well publicized.) I know we have many, many highly qualified people on the Island. My goal is to help make sure great people are able to participate, so that we get great results. At this point I have no candidates in mind.

3. If you could create your own agenda for your first City Council meeting, what are the first items of city business that you would address?

I’m looking forward to listening to my fellow city councilors, and introducing ideas of interest to me at the appropriate time, such as in the regular “council communication” period in each City Council meeting. There are seven city councilors, and I’m just one. But my priorities are clear, and I’ll work for them: Careful listening, positive and plentiful communication, rigorous analysis, deep-diving to explore alternative ideas, including what similar cities do, and reducing our debt. Above all I will focus on keeping Marco Island a community in balance among young working families, retirees, tourists and the businesses that provide goods and services for all of us, the places we worship which sustain our faith, and the robust quilt of institutions, service clubs and charities that make us a community in full.