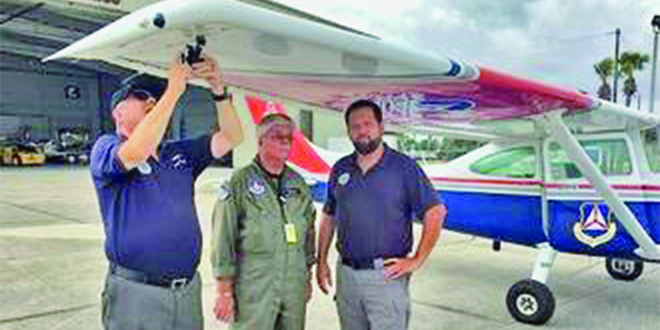 Taking advantage of the newest camera technology popularized by brands like GoPro and Garmin for sports and extreme action videos, as well as the experience gained by California and Colorado Civil Air Patrol (CAP) Wings in using the Garmin cameras in real-life disaster situations, over their summer fires, the Florida CAP Wing launched a program to test a few of the Garmin VIRB Elite cameras. A camera was recently assigned to two Southwest Florida CAP squadrons, Marco and Naples, to become familiar with the technology and its applications.

The Garmin VIRB Elite (GVE) is a small, removable camera that is attached to a wing-mounted receiver in order to take down-looking images. The camera is mounted under the tip of the wing of the airplane. It is remotely operated in flight with the help of a tablet and a Wi-Fi link. The operator can adjust several settings like the time-interval for the still images and image resolution, as well as start the still picture-taking process or video filming from our Cessna’s cabin.

The camera will take about 720 pictures per hour at the five-second interval setting. The camera will encode the images with the date and time, location (latitude and longitude), direction of the shot, and altitude. 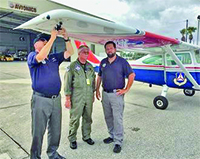 (MP) and Mission Observers (MO). The twenty (20) participants learned about the mounting, setup, and operation of the camera and the controlling tablet on the ground and in flight. The class was conducted by Marco’s Major Marian Motyl-Szary and Major Bob Corriveau.

The class participants are planning to fly missions where they use their new skills and take advantage of the new camera. Motyl-Szary said: “Certified Airborne Photographers (APs) can immediately use the camera for images and videos during the Collier County sponsored Waterways and Coastal Patrols performed by both squadrons several times a week over parts of the 10 Thousand Islands and the Everglades, looking for stranded boaters and kayakers in distress.”

One of the participants enthusiastically stated: “The new capability of taking hundreds of overlapping, high-resolution images in one flight, will tremendously help disaster assessment and recovery planning activities.”

Airborne or Aerial Photography is often used by government agencies following disasters and unusual events to assess the damage and analyze the situation for planning further recovery action. Civil Air Patrol (CAP), a volunteer organization with close to 4,000 members in Florida, is uniquely qualified to perform these missions professionally and cost-effectively. Until now our photographic arsenal consisted of professional-grade handheld cameras. Thousands of images have been provided to the Federal Emergency Management Agency (FEMA) and local authorities following disasters like floods, hurricanes, and oil spills. 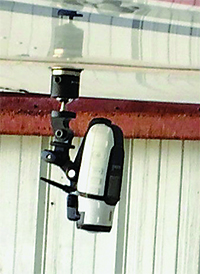 to the Federal Emergency Management Agency’s (FEMA) and State of Florida Emergency Management Department requests to provide aircraft, vehicles and personnel for aerial and ground imaging to assist in disaster relief efforts in Hurricane Matthew’s aftermath. The Florida Wing’s first air sortie was launched Friday afternoon (October 7) to survey the East Coast barrier islands south of Melbourne and inland areas for life and safety issues. The Airborne Photographer was Major Marian Motyl-Szary from the Marco Island Senior Squadron. A second member of the squadron, it’s Commander Major Robert Corriveau, was also one of the first responders, ferrying CAP aircraft North, closer to where the damage surveying action was anticipated after the hurricane.

Aircrews were instructed to look for storm damage that could limit access to vital areas. In addition to damaged infrastructure, crews were also looking for collapsed buildings that might have trapped victims. “Launching the aircraft was hampered by a high-crosswind component,” said Florida CAP Wing Group 5 Commander Lt. Col. Milton “Jim” Kaletta. “We had to wait on the weather to calm a bit in order to meet the operational safety standards.” The initial mission resulted in over 3,000 images and several videos of the shoreline of Lake Okeechobee. This information was immediately uploaded to FEMA and State of Florida Emergency Management servers for analysis. The total number of images increased to over 17,400 by the end of the Hurricane Matthew event.