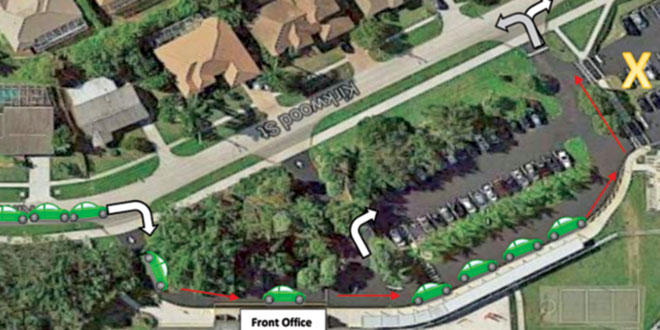 The teaching and learning are underway and so are the clubs, sports and other activities that are part of the newly begun 2016-2017 school year.

As always, the process involves that momentous and shared rite of passage for youngsters, the first day of kindergarten. It’s an experience that Jordan Carmignani of Marco Island can now chalk up in the “Been There, Done That” column.

Jordan recently kicked off his school career at Tommie Barfield Elementary School (TBE), where he was escorted by his mother, Tracy Carmignani and his brother Steel, a fourth grader, on that oh so important first day.

“Jordan was very excited,” said Tracy Carmignani of her son’s demeanor, after dropping her sons off at the schoolhouse door. “He ran to the car with his backpack on and big brother Steel was showing him the ropes.”

She described her emotions at having her youngest starting school as a happiness tinged with a dab of sadness.

“I’m very excited for him,” Carmignani said of Jordan. “He’s ready. His brother told him the first day of school was going to be horrible, so he was good and scared, but that’s what big brothers do,” she added with a chuckle.

TBE Principal Kathleen “Karey” Stewart shared some of the same emotions as the Carmignanis regarding the new beginnings that are part and parcel of each new school year.

“Lots of anticipation and excitement about continuing full-steam ahead with this school year,” said Stewart, who is in her second year at the school’s helm.

Stewart said TBE will continue its focus on the kindergarten through fifth grade initiatives that were introduced by the Collier County School District last school year: science and phonics instruction, and “cooperative learning structures,” which is students’ ability to work in groups as equal learners with equal participation.

Assistance from the community in the form of volunteers is welcome, said Stewart.

“Our volunteers listen to students read, help them with math facts and help organize our home- communication envelopes, she explained. “They help in our media center too.”

“Each year in middle school, one third of the student population is new,” he said. “This large percentage of new students changes the personality of our entire student body and brings new energy and challenges which our highly talented faculty and staff recognize. No school year is ever boring for us.”

Enrollment should again be at capacity, 420 students, at MICMS, where there are two new teachers, guidance counselor Jennifer Reddick and Roxanne Shadrick, the reading teacher for all three grade levels.

Also new this year is a reading initiative utilizing the “Achieve 3000” software program, which is designed to assist students with increasing their reading level scores.

“With the increased rigor of the state standards, only three of the 67 school districts (4 percent) received a grade of “A” this past year, as compared to 22 of the 67 school districts (33 percent) the previous year,” said Abounader. “Our expectation is that Achieve 3000 will not only provide us with the support we need to maintain our school-grade of 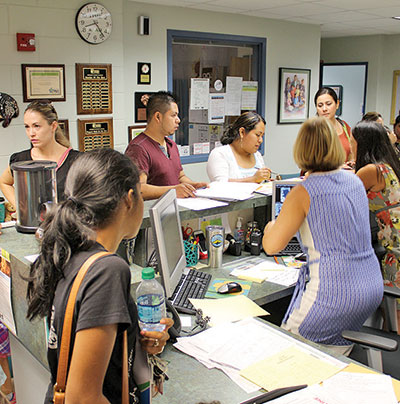 Photo by Don ManleyThe office at Tommie Barfield Elementary School was busy on the first day of the 2015-2016 school year.

“A,” which we have earned for 15 consecutive years, but also keep our school’s ‘High Performing Charter School’ status, as designated by the Department of Education. We are trying to stay ahead of the curve.”

There’s also a new elective for eighth grade students – debate. “Last year was our initial year for a debate club and it was so well-received that we decided to add it as a course to our curriculum,” said Abounader.

MICMS has also instituted a new location for students who ride the bus to be dropped off and picked up at day’s end that is located on the campus of neighboring TBE.

Marco Island Academy (MIA) is celebrating its fourth year at its San Marco Road campus and as with TBE and MICMS, enrollment there is holding steady and expected to be at or near the maximum, in MIA’s case, 250 students.

“I think it signals how important choice is for students and parents, and that there’s autonomy in education,” she said. “I think that it’s important to teach kids that they can make independent choices. I think it’s very important to be autonomous, as young as possible. It’s a different world out there today. Choices are harder and colleges are more competitive and regardless of where they choose to go, as long as they have their path and they make the right choices for it.”

MIA has eight new teachers this year, including a math teacher who will work with ESE – Exceptional Student Education – students, which is a new position.

“I think that’s really important to have a solid foundation because I don’t want those children labeled,” said Scott. “I want those students supported and I want their dreams to be achieved, like any student in the school.”

Scott was enthused about the new staffers’ talents.

“It’s the resources they’re bringing, their backgrounds, their education and they all want to be somewhere where they have choice in the classroom and they want the students to love the subject matter,” she said. “I’m getting goose bumps thinking about the experiences the students are going to have in the classroom.”

At Manatee Elementary School, the theme for 2016-2017 is “Manatee is Who We Are,” a maxim that adorns the front of t-shirts. The back is emblazoned with “I am Magnificent, I am Attentive, I am Noble, I am Amazing, I am Thoughtful, I am Exemplary, I am Empowered,” the first letter of every third word spelling out “Manatee.”

“It’s kind of our motto this year to keep the kids focused and moving forward,” said Manatee Principal Wendy Borowski,

Enrollment should be between 795 and 810 students, which has been the norm, she said.

There are seven new teachers this year, three of them who’ve transferred from other schools in the district: Matthew Sibert, who teaches fourth grade, fifth-grade teacher Jill Baldwin, and ELL Immersion teacher Emma Gonzalez.

Borowski said the school will be conducting fundraisers during the school year to finance an update to the school’s media center. “Were 22 years old and it’s time to revamp our shelves with new books,” she said. The school also hopes to find someone to finance its teacher-led, after-school, academic program, after the benefactor who’d supported the program for years, passed away.

Classroom volunteers are needed help with reading to students, as well as in the media center, on field trips and in assisting ELL students with their English. Anyone interested in volunteering can contact school counselor Debbie Eby at 239-377-7600.

As with her fellow principals, Borowski is glad a new school year has arrived.

“It’s always very exciting. It’s always about regenerating the energy and getting everyone pumped up for the kids. Underlying everything is the belief in what they do as teachers and a belief in moving the kids forward. Moreover, it’s exciting to see how happy the kids are to be here. There’s that energy. That, to me, is why we do this.”