Never Too Young For Boating Safety 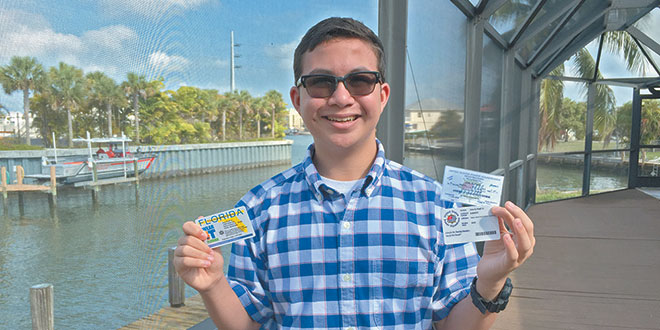 Some of the more “mature” attendants at two of the Marco Island Sail and Power Squadron’s (MISPS) recent classes were wondering just who is that bright young man studying alongside us? Well, his name is Joey Puell; he is a 13-year-old student at Marco Island’s Charter Middle School, and he has some really good reasons for wanting to enhance his boating knowledge.

Some time ago Joey had an accident while on a Boy Scout boating trip. As he approached the back of the boat to get out of the water, the propeller was moving. Joey suffered a propeller injury, two severe gashes on his right leg and one on his left foot. Nerves were cut and he lost feeling in one of his legs. For a good while, Joey had to wear a cast on the damaged leg. Now, one of his feet is not strong enough to lift up on its own; it needs to be kept in place by a permanent brace.

Because of this experience, Joey says that he will take the responsibility of “captaining a vessel” seriously. Safety will be a number one goal, and he will make sure that everyone on board is informed of what to do and what not to do while boating or in the water near a boat.

Joey also has other typical goals that motivated him, and his mom and dad to enroll in the MISPS courses titled America’s Boating Course (ABC) and its follow-up, Seamanship. The 13-year-old knows that it will be a while before he can get in a car and run errands for his parents. He is hoping that once his family gets a boat, he will be able to get in the boat and make a grocery run to Winn Dixie, a waterfront supermarket. Now that Joey has passed the boater education course sponsored by the Marco Island Sail and Power Squadron, and as long as he has his Boating Safety Education Card ID issued by the Florida Fish and Wildlife Conservation Commission on board, he can absolutely do that.

He also cannot wait to go fishing, and like other residents and visiting tourists, to bring his catch to a local restaurant for cooking. He especially wants to try his hand at fishing since one of the MISPS members shared a secret (allegedly fantastic) fishing spot. The idea of hanging out on one of the many tropical beaches 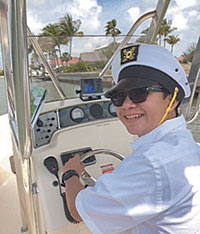 At the helm on his first boat outing after passing America’s Boating Course.

The Puells are fairly recent arrivals in Marco Island. They have their origins in California, but they also lived in Puerto Rico for ten years; they are used to tropical style living. After moving to Florida from Puerto Rico, they first lived in Vero Beach. Once they identified Southwest Florida as their target area, and this island, specifically, they started on their gradual trek south, first to Naples, then to Fiddlers Creek, and, finally, about a year ago, to Marco Island after finding just the right house that is perfect for their future boating plans.

The Puells decided as a family to take courses after asking about renting a boat and finding out that this could be done pretty easily. They realized they did not know enough or have enough skill to simply venture out, so they looked around for a group that could help them. Since their home is close to the Marco Island Sail and Power Squadron’s office on North Collier, they decided this would be the best place.

When asked what the 13-year-old learned in his first boating course, he talked about the rules of the road and how important it is to understand things like which boat has the right of way. He particularly liked the “around the island” trip MISPS does as an ending experience for students in the ABC class when squadron members, among other things, point out where leaving and returning changes, critical knowledge for adhering to the well-known red right return rule. Joey also enjoyed getting some beginning experiences in knot tying, and thinks the information about docking and undocking was also very important. The next MISPS class, Seamanship, Joey said, went into much more detail on all of these topics.

Joey thinks it is a good idea for classmates at Marco Island Charter Middle School to take these MISPS classes. Boating without some of the things he learned, he believes, could be dangerous. While making time for schoolwork and other responsibilities, he intends to continue taking boating courses. Joey says he likes his school very much, particularly pizza days. His other responsibilities include caring for his two pet rabbits: Bugsy H. Bunny and Apollo N. Bunny.

Anyone interested in finding out more about the courses taken by Joey and his family or about the many activities of the Marco Island Sail and Power Squadron can contact Education Officer Ted Reiss at 239-213-8722.