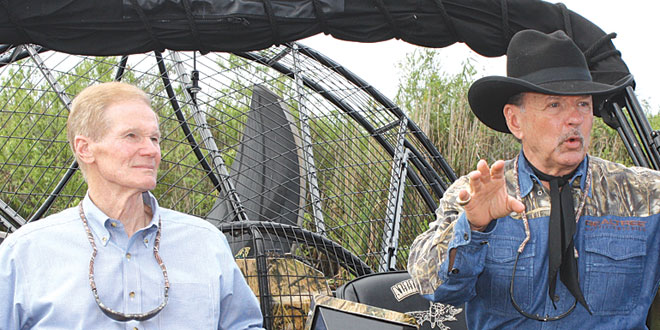 Saturday, January 12th, marked the start of The Florida Fish and Wildlife Conservation Commission’s 2013 Python Challenge. The month long hunting competition aims to both educate the public and better understand the invasive Burmese python. Senator Bill Nelson joined the hunt alongside FWCC Commissioner Ron Bergeron on January 17th to bring awareness to the devastation of the Everglades caused by the constrictor snake.

Before heading out on the hunt, Senator Nelson and Commissioner Bergeron addressed media alongside I-75 at the Mile Marker 41 Boat Ramp. Senator Nelson discussed the urgent need to control the ever-growing python population. “The superintendent of [Everglades National Park] has said that there may be as many as 150,000 [pythons] just in Everglades National Park. And so we’ve got a real problem.”

While constrictor snakes do not occur naturally within the state, the Burmese python has been 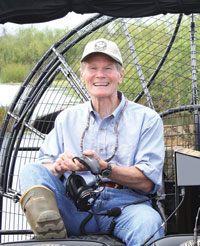 considered an “established species” in Florida since 2010, according to the United States Department of Agriculture. The original introduction into the Everglades is unknown, however, the Florida Fish and Wildlife website states, “it is likely that Burmese pythons escaped from a breeding facility that was destroyed during Hurricane Andrew. It is also likely that pet pythons have been released in and around the Everglades.”

According to a study published in January 2012 by researchers at Virginia Tech University, Davidson College and the U.S. Geological Survey, dramatic decreases in prey mammals in the Everglades can be linked to the growth in the python population. In 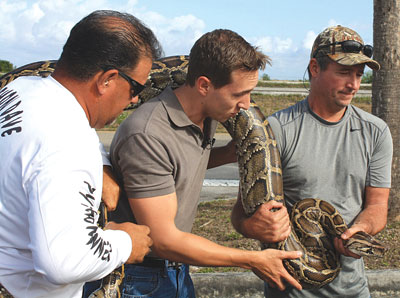 This Burmese python on display for journalists on January 17th measures 13 feet in length. Burmese pythons can grow up to 26 feet long. Photos by Natalie Strom

the southernmost part of the Everglades, where the Burmese have been established the longest, raccoon, rabbit and opossum populations have dropped by 99 percent over the last 11 years. The bobcat population has decreased by 87.5 percent and fox and marsh and cottontail rabbit populations have simply vanished. Leaving little to no food for native species such as alligators, black bears and panthers could cause a devastating effect on the wildlife as a whole in the Everglades, south Florida and throughout the state.

In an effort to curb the python population, The U.S. Department of the Interior, with the support of Senator Bill Nelson, announced the ban of the the importation and interstate transportation of the Burmese along with three other nonnative constrictor snakes in January of 2012.

“Think of the larger context of the Everglades,” stated Nelson, who went on to discuss 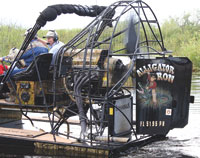 current Everglades restoration projects such as the bridges being built along Tamiami Trail to increase water flow and cleansing. “All of this can go for naught in our restoration plan, which is a 40 year project jointly with the state and federal government, when something like this starts getting in the way.”

FWCC Commissioner Ron Bergeron, a true champion for the Everglades, commended the Senator for his concern. “Nelson is a great supporter of the Everglades. We’ve been coming out here together for 35 years. He’s a wonderful senator that’s very focused on our environment and [he and I] work constantly, way beyond the pythons, regarding all the Everglades restorations. He’s not just here for the pythons, he’s here all the time.”

Before disappearing into the Everglades on his personalized airboat, Bergeron, a lifelong hunter who lives on an 8,000 acre natural ranch (“Just like God created it.”), had this to say of the

Senator Bill Nelson discusses the harmful impact of the invasiveBurmese python to the Everglades as FWCC Commissioner Ron Bergeron tightly holds the head of a recently captured constrictor.

2013 Python Challenge: “I was very blessed to be raised as a young man before the Everglades was compartmentalized.

I’ve seen it naturally, that’s why I’m so honored to be the point commissioner on the Everglades, to make sure that we conform a consensus of a natural system. And I spend half my time trying to do that. I wouldn’t be for this hunt if it wasn’t an invasive species that was capable of eating everything in [the Everglades] food chain.”

More than 1,000 hunters are registered for the 2013 Python Challenge which ends at midnight on February 10. Participants paid a $25 registration fee and completed an online training course. A grand prize of $1,500 awaits the person who brings in the most pythons and a $1,000 prize will go to the person who captures the longest python. As of Monday January 21st, 27 pythons had been killed and brought to the University of Florida to be logged and studied.