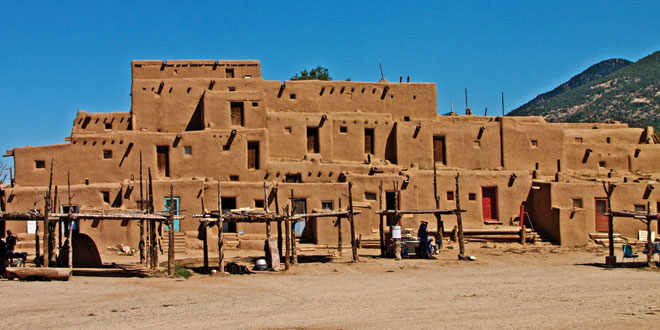 Native American heritage is an integral part of the culture of New Mexico. Earliest evidence of habitation dates to 25000BC; around 10000BC the Clovis-Paleo hunter gatherers roamed the areas. Anasazi cliff dwellers, the ancient ancestors of the Pueblo people, were here as early as the 12th century BC, although their culture thrived in the years 500BC. With the ascendency of agriculture, villages sprung up which, when discovered by the Spanish in the 1500s, were called “pueblos.”

Within an easy drive of Santa Fe, New Mexico are a number of important Native American sights. About an hour drive north and well worth the trip is Bandolier National Monument. A 1.2 mile trail affords the opportunity to get “up close” to Anasazi cliff dwellings believed to have been settled in the 12th century. We have seen a number of cliff dwellings throughout the southwest, but these have been the most impressive.

Visitors are free to wander among the ruins, kivas (underground rooms used for religious ceremonies), and the cliff dwellings, some of which are adorned with petroglyphs and pictographs. Ladders placed throughout the complex allow visitors to climb up and look into or enter individual chambers. A further half mile walk leads to the Alcove House, where climbing four ladders leads 140 feet above the canyon floor for a look inside this cave…not for the faint hearted!  There is a museum with an explanatory film at the visitor center. Note that as a result of the fire and floods of 2011, access to Frijoles Canyon, the location of 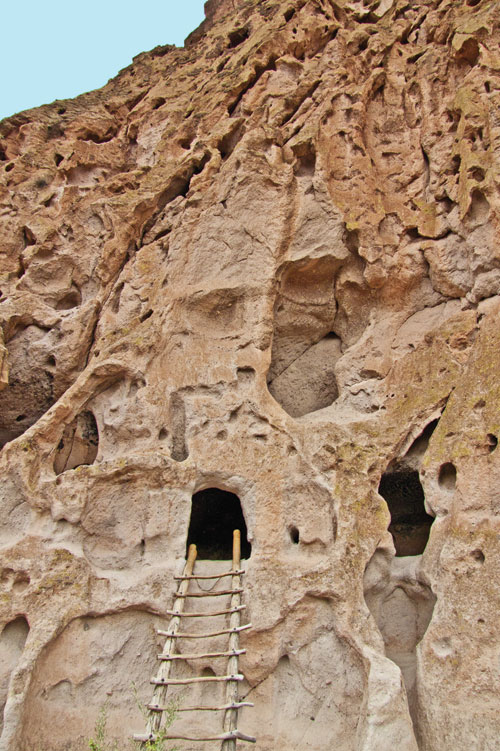 the visitor center and archeological sites, is by mandatory shuttles from nearby White Rock. Signs along the highway to Bandolier direct visitors to the shuttle parking lot; it is estimated that this shuttle access will continue until at least 2014.

Just a half hour from Santa Fe is Pecos National Monument where the remains of a 14th century pueblo community abandoned in the 1800’s and 17th century mission can be viewed. The Visitor Center houses a small but comprehensive museum detailing the history and lifestyle of the Pecos Pueblos.

Surrounding Santa Fe are what are known as the “Eight Northern Pueblos,” two are north of the city, six are south. If time is limited and only one can be visited, I would recommend Taos. A national historic landmark and the first UNESCO living world heritage site, Taos pueblo is considered the oldest continuously inhabited community in the United States, dating to perhaps as early as 1000AD.  Relatively unchanged since the Spanish discovered it in the 1500’s, it contains the largest collection of multi-story adobe pueblo dwellings in the US. Still inhabited by the Tewa people, visitors, after paying an entrance fee, can wander about on their own or take a guided tour. Our tour guide was a young woman who had grown up on the Pueblo and whose family still returns for ceremonies throughout the year.  She provided us with much information about the history of her people as well as their present day life. 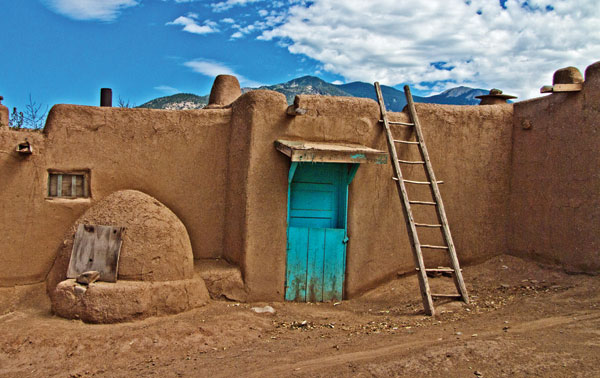 and windows have been added to structures. Cooking is still done in outdoor ovens called hornos. The children attend a Pueblo elementary school.  At the end of this education, parents choose whether to send their offspring to the town of Taos for high school. Our guide’s family did choose this option and she described what was quite a culture and language shock for her going from the small native school to the town high school.  She is now enrolled in a nursing program at the local branch of the University of New Mexico.

Attempts by the early missionaries to convert the Native Americans to Christianity  resulted in a mixture of religious culture in Taos Pueblo. Although the original missionary church (1619) is a ruin adjacent to the cemetery, the new San Geronimo Church, built in 1850, combines native religion with Catholicism. While many of the residents are Catholic, they have preserved their native religious rites, including burial rituals. The Pueblo People enjoy sharing their Feast and Dance Days with visitors. Our guide passionately described the ceremonies in great detail and encouraged us to return during one of them for a memorable experience. It is during these festivals that the residents shed their jeans and Nike sneakers for more traditional costume.

Among the Pueblos south of Santa Fe, Santa Clara and San Ildefonso are probably the most visited. Santa Clara, large in terms of land mass and population, is the site of the Puye Cliff Dwellings settled in the 13th centuries.  Guided tours of these ancestral homes are available. Within the Pueblo, some of the artisan studios are 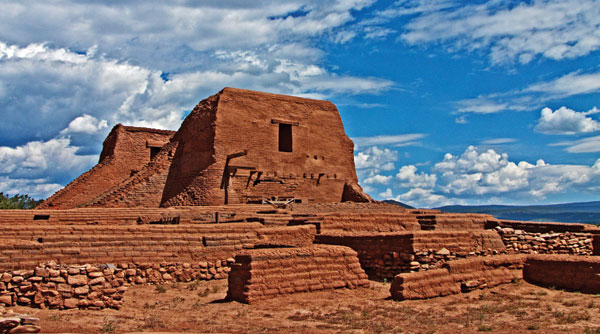 open to the public and there are galleries for purchases, particularly of the black and red decorated pottery for which Santa Clara is known.

San Ildefonso Pueblo was made famous by Maria Martinez, a noted potter who created the black on black pottery technique which has become popular with collectors. Learn about this technique in the Pueblo Museum or purchase some pieces or other artwork in one of the shops, some of which operate out of homes.

There is an etiquette to follow in visiting living Pueblos, especially during Feast days. Most of it is common sense, but if you plan a visit, familiarize yourself with the rules which include not entering private homes unless they are clearly marked as shops, not climbing on ladders and not entering cemeteries. Except during Feast days, photos are usually permitted, but there is a for-fee permit required. Non-permitted cameras including cell phones can be confiscated.

If your visit to Santa Fe is limited and you do not have time to visit one of the wonderful Native American sites, at least allow some time to visit the Museum of Indian Arts and Culture located on Museum Hill in Santa Fe  Its present long-term exhibition theme, Here, Now, and Always tells the story of the people of the southwest and the diversity of its history, art, language, and cultures. Among other wonderful showcases, there is a film of Maria Martinez (who died in 1980) and her son that demonstrates her black on black pottery technique. The process involved in this non wheel, carbon trapping smoke firing technique is fascinating.