Kaitlyn Sokolich of Naples was recently selected to participate in the 2017 Miss Jr. Teen pageant competition that will take place on Sunday, April 9, 2017. Kaitlyn learned of her acceptance into this year’s competition when the pageant announced their selections following interviewing in the local area. Kaitlyn submitted an application and took part in an interview session that was conducted by this year’s pageant coordinator. Kaitlyn will be competing for her share of thousands of dollars in prizes and specialty gifts that will be distributed to contestants. Kaitlyn will be competing in the Miss Jr. Teen division, one of four divisions that will have young 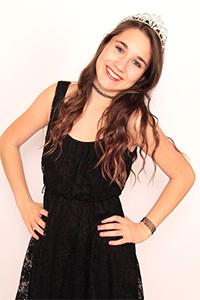 ladies ages of 7 through 20 competing in modeling routines, which include Casual Wear and Formal Wear. Most importantly, Kaitlyn will display her personality and interviewing skills while interviewing with this year’s judging panel. Personality is the number one aspect that each contestant is judged on during all phases of competition. If Kaitlyn were to win the title of Miss Jr. Teen, she would represent her community at the National Competition that will take place in Orlando, Florida. Over $30,000.00 in prizes and awards will be presented at the National Competition while each winner enjoys this expense paid trip of ?ve nights and six days in Orlando, Florida.