Naples Chabad was built, and now they come

As Chabad Jewish Center celebrated the grand opening of its doors with modest pomp and ceremony on Sunday, January 15, strains of the famous Fields of Dreams quote, “If you build it they will come” reechoed throughout the afternoon. Over the past year, the recently acquired property at 1789 Mandarin Road has slowly been transformed into a vibrant facility, a blossoming preschool for the arts, an active summer day camp for the children, a Hebrew school, and an adult learning center. What is even more miraculous, is that most of the labor was undertaken by friends and members of the community. With Phase I completed and Phase II yet to come, help is still needed to continue the good work.

Friends and supporters from Naples and Marco Island numbering in the high hundreds, well wishers, municipal, county, and even state politicians in the person of Senator Garrett Richter and his wife Diane and Florida Governor Rick Scott and his wife Ann participated in 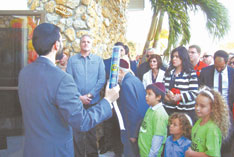 Rabbi Fishel Zaklos, holds the mezuzah he is about to affix to the doorpost of the newly dedicated Chabad Center, during the ribbon cutting ceremony.

It takes optimism to make dreams happen, and as many of the speakers commented, the history of the Jewish people has always been to strive for optimism even in times of terrible adversity.

MC Bob Harden, Naples radio personality introduced Rabbi Fishel Zaklos and his wife Ettie, reminding everyone that eight years ago when the Rabbi arrived in Naples with his wife and eight-month old son, he knew very few people and religious services held at his house were attended by one or two people. Now, he and his wife have four children and almost 1,000 people attended the Chabad outdoor Chanukah celebration in the Village at Venetian Bay last month. As Chabad slowly outgrew every facility over the years, members and benefactors finally united to purchase and renovate this building. 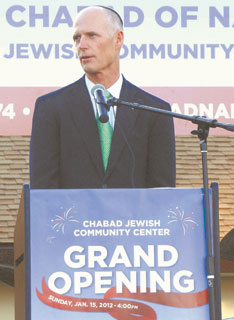 Florida Governor Rick Scott said that Chabad is well placed in Naples, FL – in a state where dreams come true. He wished them success in their future endeavors.

They recognized the fine work of the growing Chabad organization and its contributions within the community during its first phase, and wished it well as it begins phase two of growth.

Dr. Art Seigel, Chabad Center President welcomed the crowd and told of acquiring the special Torah that had been completed in the early 1900s and donated to Chabad so that it would be in constant use.  Two children from the Hebrew School, Zach Schiller and Jaime Trop spoke about how their lives were enriched by their education there.

As the young Rabbi enthusiastically addressed the crowd of well-wishers his warmth, humor, and sincerity were evident. He too emphasized the comparison to the Kevin Costner movie Field of Dreams — “build it and they will come”. He jokingly admitted that with his slight build and dark beard and spectacles he is often mistaken for Costner whenever he goes to the supermarket.  He selflessly attributed his success to his wife, partner and best friend Ettie, as well as 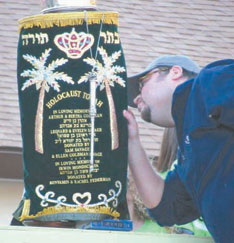 to God, and his long list of supporters and benefactors, and dedicated staff at the Center.

Rabbi Zaklos grew up in Oak Park, Michigan. One of eight children, he said his parents encouraged him to follow “a life of passion and goodness” and do what he loved, rather than insist he follow in his Rabbi father’s footsteps. His education and subsequent rabbinic training took him all over the world, and finally led him and his young wife to Naples where they were determined to build their dream.

One might wonder about the success of Chabad, and what exactly attracts so many people of all ages and different intensities of belief to worship there.  Each congregant seems to have a different response, but it all comes back to this: a feeling of welcome, warmth, sincerity, acceptance, and a desire for Jewish education. Rabbi Zaklos himself has said, he presents a ‘smorgasbord of religious thought’ and people are free to choose for themselves. He also recognizes that these

trying times seem to encourage many people to return to their religious roots. Chabad services are given in both Hebrew and English, and explained in English. At the end of each Saturday morning Shabbat service, Rabbi Zaklos wishes each person by name, a “Good Shabbos”, a feat that astounds most people, especially when there are more than 100 people in attendance.

Rebbitzin Ettie Zaklos also spoke of fulfilling the dream, seeing the state-of-the-art preschool open five months ago to offer the best education possible for the children.

Governor Scott said Florida is the state where dreams come true, and he wished Chabad success both with its first step and for its future endeavors.  Scott recently visited Israel and met with dignitaries there, he said, and in honor of “keeping the light” of learning and knowledge of different faiths, Rabbi Zaklos presented him with a Menorah (candelabra).

The tiny tots from the PreSchool School of the Arts serenaded the audience with several songs, and then the children from the 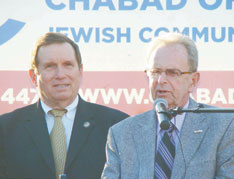 Collier County Commissioner Jim Coletta, left, and Naples Mayor Bill Barnett each present the Chabad Center with proclamations from the County and the City respectively, declaring January 15, 2012 Chabad Day and honoring Chabad’s contributions to the community.

Hebrew School participated in a very touching ceremony.  Sam Savage and Ellen Goldman Savage, and Benyamin and Rachel Federman presented the synagogue with a beautifully restored Sefer Torah, that had been hidden underground in Poland during World War II,  brought to the United States and used in two Long Island congregations. During the presentation ceremony, the Torah was held high by Ben Federman, received its mantel, and then the children came forward to “kiss the Torah”.

As the ceremony concluded, everyone gathered at the front door of the building to witness the cutting of the ribbon and the placing of the mezuzah, a parchment scroll within a container, on the right hand doorpost of a Jewish home to signify the connection to God, his protection, and a Jewish heritage.

The Center’s campus was then opened to the public for tours, entertainment and games for the children,  and refreshments.

As many of the dignitaries said, it was a day of fulfilling dreams for the community  and as such, creating a much more culturally rich environment for its residents.