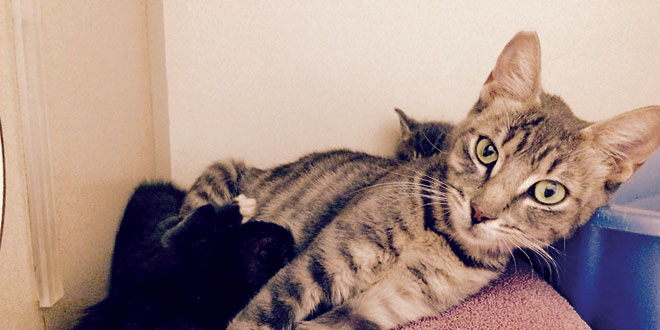 Dear Fellow Felines: Please send help! I’m drowning in kittens! I have kittens from as far away as Tennessee – our first-ever snowbird felines, to as near as the closest Walmart.

Things had been pretty slow for awhile here at For the Love of Cats – the island’s no-kill cat shelter, so my staff of 80 volunteers (remember – cats have staff, dogs have owners) had, understandably, grown bored. For my part, and as shelter supervisor extraordinaire, I made the executive decision to go on vacation before the season began; I needed to re-charge the batteries as they say.

On my first night back (you all do know I’m just a cat, right) a group of stealthy volunteers snuck a bumper crop of 10 kittens into the shelter under cover of darkness. I could not believe my eyes when I cruised the shelter’s perimeter the next morning and found 20 extra sets of eyes staring back at me. Were my eyes deceiving me? I immediately hunted down shelter founders Jan and 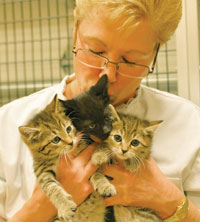 Jim Rich to clear up what was clearly a hallucination on my part. But alas, my eyes weren’t deceiving me.

It turns out that the new arrivals are fosters that were rescued by the Humane Society of Naples. These kittens were on their way to a kill shelter in Tennessee. Their only problem was how to get the kittens down to Naples. It just so happened – as these things inevitably do – that one of our volunteers lived a short distance from the Tennessee shelter. Said volunteer and his wife graciously agreed to add the ten kittens to a cargo that already included their own three adult cats. Thank goodness they were making the 13-hour drive in a comfortably sized van!

Upon their safe arrival here, my staff bathed and de-wormed the “Tennessee Ten” and set them up in the larger of our two romper rooms. Once the kittens were sound asleep – and no one was looking – I decided to give the newbies names befitting their origins: Elvis, Miley, Billy Ray, Morgan, Dolly, Reese, 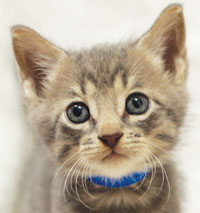 Wilma, Chet, Lester, and Lynette. After all, my staff and I had agreed to foster the kittens until the Humane Society of Naples had space for them. Don’t you think it was only fair that I got to name them?!

They say Walmart has just about anything you can think of on its shelves. But kittens? Unheard of! Unless you were poking around the garden center looking for good deals! I received an email the day after Labor Day telling me about a shopper’s savvy sighting of a litter of three week old kittens. I sent out a total of three rescue teams over the course of 24 hours. Mom cat was easy to catch; she was starving and thus quick to take the tuna and fried chicken bait we’d set up.

The kittens were another matter altogether. Using infrared imaging and night vision goggles (just kidding) I finally located them, buried deep amidst pallets stacked high with bags of mulch. But attempts to trap the four wily kittens were fruitless. They were just too scared, too 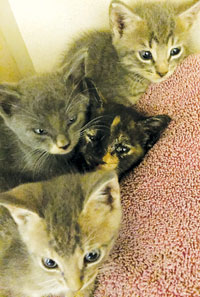 small, and too weak to venture forth.

In a heroic act of determination, Jim Rich hopped onto a pallet jack and re-arranged the Walmart Garden Center’s inventory of mulch in order to gain access to the kittens. Jan Rich took a broom handle and gently nudged them from the pallet harboring them and into the palm of her left hand. Mission complete! “The bruises, grease, and muck were worth the effort to save these little ones,” said Jan. The Walmart Five are enjoying life in the shelter and getting plenty to eat. We are having to supplement their diet with kitten milk so they get the nutrients necessary to their healthy development. I named momma cat “Marty” and so, of course, named the kittens Sam, Wally, Alice, and Helen.

My final bit of news is that my triathlon team “Meow Power” is readying itself for Sunday’s (October 4) Marco Island Fitness Challenge Triathlon at the Marriott. Sammy Miller (swim), Karina Paape (bike), and Maria Lamb (run) will be competing as a relay team whose main goal is to raise money for the shelter. After all, 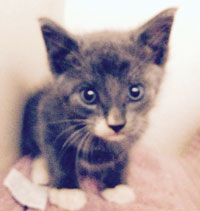 if you’re going to endure three months of sweaty paws and mind-numbing workouts, you may as well do so for a worthy cause! So far they’ve raised $1,000 of their $5,000 goal. If you’d like to donate to their effort and bolster the kitty (ha ha), go to our website (www.fortheloveofcatsfl.com) and click “Meow Power”. The fundraising deadline is October 8. All the donations go directly to the care of our rescued cats and kittens.

Coaching these gals in the withering summer heat has been a challenge. My final team Meow Power pep talk is to just go out there and have fun! Don’t worry about trying to turn in a sub-two hour finishing time. No matter what happens the outcome will be a big win for Meow Power and the kitties here at For the Love of Cats. You go girls!