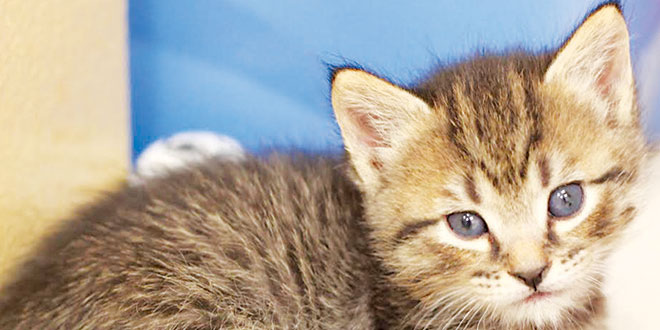 Dear Fellow Felines: Just as I was packing for my annual six-week vacation to the rain forests of Hawaii, I found my paws full, yet again, with new kittens who, in most cases, were born to “teenage moms.”

In 99% of these cases, the new moms are less than one-year-old. Because their humans failed to have them spayed, these teenagers (in human years) can, and usually do, get pregnant the first time they go into heat (usually somewhere around six months old). Once their humans notice their swelling bellies, their once beloved cat is kicked to the curb, as if it was the cat’s fault that she hadn’t been “fixed.” This is really a no-brainer and a too frequent occurrence nationwide. This is how communities end up with feral cats roaming the streets, and reproducing to such an extent that cat overpopulation gets labeled a “nuisance.” In tens of thousands of communities across the country, these cats are trapped and euthanized, poisoned or shot.

At For the Love of Cats we take a more pragmatic and humane approach. We use a cat population management program known as “TNR” (trap, neuter, release). Once our ferals have been neutered and given a thorough medical exam – which includes a blood test for contagious diseases – they are returned to their original stomping grounds, where they live out their days in managed colonies. They are given fresh food and water 365 days a year by our dedicated staff (remember, dogs have owners, cats have staff) of cat lovers.

Allow me to give you an example of an all too typical scenario. Once thrown out of the house, the teenage mom must find food and shelter for herself. She is usually malnourished by the time her kittens are born. At that point her maternal instincts kick in, and she seeks shelter for her newborns. Jim recently fielded a phone call from a nice lady who awakened one recent morning to find a litter of four kittens and their mom on her small lanai. The kittens were a mere five days old!

Apparently, the lady always kept her lanai screen door ajar so her own cat could come and go as he pleased (not a good idea on predator-rich Marco Island). There was 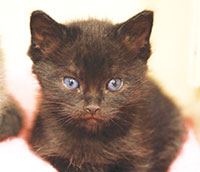 always food and water on the porch. So “Cherise” (that’s what we named this proud momma cat) followed the lady’s cat onto the porch one evening and discovered that most precious of all resources – food! The next day she returned and saw that food and water were still available. On day three, this clever mom cat brought her precious kittens onto the porch and set up her new household in a quiet corner. When the homeowner saw the new arrivals, she called us. We geared up, dashed to the scene, and transported the feline family back to the safety of our no-kill, TLC-filled shelter. During the intake procedure, a thorough medical exam, it was discovered that Cherise had two infected molars which had to be extracted immediately to preserve her health, and that of her kittens.

Another common occurrence is when the mom cat either is killed by a car (or other means) or is not yet ready to be a parent, thereby abandoning her kittens. Said kittens best hope is to be discovered by a good Samaritan to pluck them from the wild and dial the shelter’s telephone number. In instances where momma cat can’t be found, the orphaned kittens must be bottle fed – every four hours – for weeks (the number depending on their age). My dedicated staff (remember, cats have staff, dogs have owners) splits up the feeding schedule amongst themselves. In the case of days-old kittens, a staffer usually takes the newborn into their own home to foster them until they are eating solid food and ready for around-the-clock playtime at the shelter. Did you, my dedicated and loyal readers, know that you too can watch kitten action from poolside or elsewhere on our “kitty-cam,” accessible via our website: www.fortheloveofcatsfl.com?

While you’re at it, please click on my “Meow Power” link. Meow Power is my relay triathlon team of three cat ladies who will be competing in next month’s Marco Island Fitness Challenge Triathlon, which starts and finishes at the Marriott on October 4. For those of you who skipped my last five months columns, team Meow Power’s goal is bigger than the winner’s circle. Their greater goal is to raise $5,000 in donations to support For the Love of Cats’ mission of reigning in cat over-population in Marco and Collier County. So 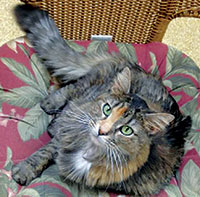 just who are these selfless cat lady athletes?

Sammy Miller is our swimmer, Karina Paape our biker, and Maria Lamb our runner. All monies in the kitty (ha ha) will help us continue our mission of rescuing abandoned cats and kittens, and finding furever homes for one and all. My credo: NO CAT LEFT BEHIND!

Meow Power’s biggest training concern is hydration, hydration, hydration. I drive this point home via example every chance I get: I sit at any one of the shelter’s sinks demanding the water be turned on. I play in the on-demand waterfall, splashing water everywhere and on everyone so my Meow Power gals get the message that drinking water is lots of fun, and should be done early and often.

It is with heavy heart that I tell you my assistant Meow Power coach “Felicia,” an 11-year-old Maine Coon mix rescued near the Esplanade four months ago, crossed the Rainbow Bridge on August 24. When rescued, Felicia was starving and weighed little more than her skin and bones. A litany of health issues (gallstones, spastic colon, low thyroid, and anemia) made her un-adoptable due to her complicated medication schedule. I, however, insisted that she carry her weight around here and put her in charge of Meow Power’s fighting spirit, thus keeping their legs, feet, and arms moving through sizzling hot daily training regimens.

You, dear reader, can help team Meow Power reach the finish line and honor Felicia’s gentle spirit by visiting the team’s donation page at the aforesaid website. Or, if you prefer, you can send us a check with a note saying it’s for team Meow Power. Otherwise, it might go to paying the water bill!

And last, but not least, is our just published “Glamour Puss 2016” calendar. For a mere $15 you can enjoy cats every day of 2016. My Glamour Puss calendar is available for purchase online, or at PetSmart during our adoption weekends, or at the Farmer’s Market which begins next month. And finally, after years of complaining, yours truly finally made the cut; I am one of the “cat of the month” winners!