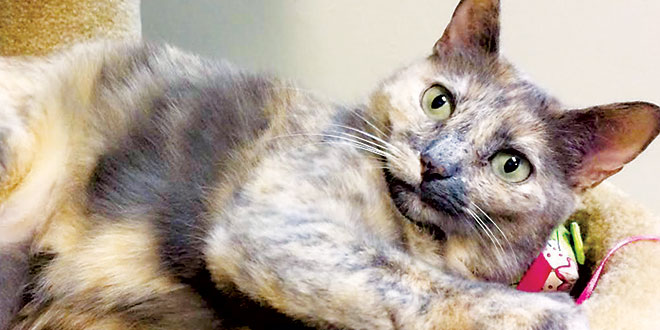 FOR THE LOVE OF CATS
Naomi &Karina Paape
chestergun@comcast.net

It’s official! My triathlon team has a name – “Meow Power.” A big thanks to all of you who answered last month’s call for team name submissions. The winning name was submitted by Claire Baumler, one of my volunteers. What do you, dear readers, think of a minor team name modification, something along the lines of “Naomi’s Meow Power?” I think this is only fair since I am responsible for thinking this whole endeavor up in the first place. Moreover, I have to whip my team of three into peak condition via my intensive training drills and strict adherence to an athlete’s diet (we’ll get to this in upcoming issues), during the four months leading up to the October 4 Fitness Challenge Triathlon at the Marriott.

Our team mascot is the unforgettable Mr. Kitt, who lived out his last five years here at For the Love of Cats. I got here a few months before Mr. Kitt, in 2008, and grabbed the title “Shelter Supervisor.” When I saw what a hit this charismatic Maine Coon cat was with my staff of 80 (yes, cats have staff, dogs have owners), I appointed him “Assistant Kitten Manager.” Kitt the Kitten Manager was 16-years old when he first crossed the shelter’s threshold. He only worked part-time and had my entire staff under his sweet, furry paws. Kitt’s favorite thing in the whole world was to be brushed. He even had his own special brush in the grooming tools drawer. I 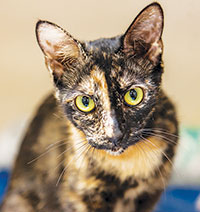 Kitt and I arrived here at For the Love of Cats within months of one another in 2008. I was an incorrigible “biter,” and ultimately my person kicked me to the curb. That’s when I became the island’s most talented “dumpster diver.” After rescuing me, shelter founders Jan and Jim Rich quickly discovered that they could not break me of my anti-social biting habit. After many excruciating months of behavioral evaluations, I was labeled “unadoptable” and issued a one way ticket to a cat sanctuary in north Florida. I refused to get on the bus, however, and have been here ever since. I have even been granted “house privileges” by Jan and Jim I love tormenting their other three cats: Danny, Zoleyma and Max. And yes, of course, I’ve spent many hours in time-out.

Mr. Kitt, on the other hand, had a heart touching story of losing his family, who in turn had lost their home when he was 16-years old. Starting with the economic meltdown in 2008, we found ourselves taking in dozens of adult cats who’d been abandoned after families lost their homes. From 2008-2012, we took in 150 adult cats! We found everyone new “fur-ever” homes, except for Kitt. Unbeknownst to me when he arrived, poor Kitt was in bad shape, due largely to the fact that his diabetes was untreated, as was his kidney disease.

He had a few other, less serious health issues, including food allergies. Given his age and medication requirements, my staff campaigned to let 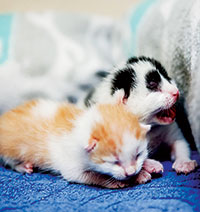 him stay. We enjoyed five great years with Kitt, who had the gentlest temperament in a cat that I’ve ever witnessed or heard of. When his sweetness crossed the Rainbow Bridge in 2013, there wasn’t a dry eye in the house. To show Kitt how much he’d enriched our lives, Jan and Jim held a memorial service for him at the shelter, which included a video loop of his days and nights with us. Once again, not a dry eye in the house. In fact, Kitt had such a captivating spirit that local quilter Deb Crine was inspired to make an absolutely gorgeous “Kitt quilt.” I hope to use this artwork for our t-shirts, which will be available for purchase as we get closer to the event.

The October triathlon had 325 entries last year, and is open to individuals as well as relay teams. I opted for the team relay option because For the Love of Cats is all about team work. Sammy Miller will do the quarter-mile swim, Karina Paape will do the 15-mile bike ride, and Maria Lamb will do the 3.1-mile beach run. I know my gals could win this thing if they put their minds to it. However, team Meow Power is focused on reaching its $5,000 fund raising goal. All monies raised will be donated to For the Love of Cats, who, in turn, will use it to fund its “Help ‘em Keep ‘em” program.

This program is for low income families who are on unemployment, disability or otherwise 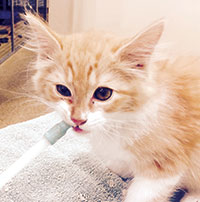 unable to pay for veterinary services. The cats taken in by these kind folks are strays and/or friendly cats they’ve been feeding. A few times monies from this program have been used to treat an injured cat that someone wants to give a safe home. Last year the shelter raised $3,700 for this program, the bulk of which was used to save the life of Rascal, the victim of a nearly fatal bobcat attack in February of this year.

Rascal ultimately lost one of his hind legs, but is still one happy boy, according to Jan who recently paid him a visit. A known “door dasher,” Rascal continues to stalk the front door in hopes of making yet another run for it. Didn’t this handsome black and white kitty learn his lesson? He is especially frustrated by the baby gates strategically positioned at the front door, but he loves his new window perch. His favorite wildlife to watch are rabbits.

I got a lovely “love” letter from Nestle, one of our most recent adoptees:

On the new arrivals front, we took in two 10-week old kittens: Smitty and June. They’re up for immediate adoption if they haven’t already been snapped up by the time you read this. We also took in a litter of four frightened kittens. No other rescue group in Collier County would take them in because they are considered to be “too feral.” But my staff knows how to turn-around these types of kittens – it just takes lots of patience, love, and 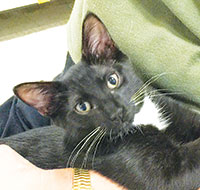 TLC. Unfortunately, momma cat is very feral and will be returned to her home outside to be a community cat, after she is spayed, vaccinated and ear-notched (a notched left ear identifies feral cats who’ve been sterilized).

Now that I’ve shared all my happy news with you, I have a confession to make. While Jan and Jim were on their three week foray to Italy and other faraway parts of the world, I was a VERY BAD TORTIE! I sprayed the back of their walk-in closet (yes, girl cats can indeed spray), and peed in the sinks and on throw rugs. Boy are they disappointed in yours truly! Especially since this is the number one problem cat staff encounter, and I’m the go-to girl for answers. So now I’ll give you the lowdown from the perspective of a confessed out-of-box, urine marking offender.

I was angry at being left behind, so it really wasn’t my fault. So what if I didn’t have a Kitty Passport? You don’t just leave your shelter supervisor to fend for herself while you jaunt around Europe. All I’ve done is make it hard for anyone to forget my existence. As a result, Jan and Jim have increased their play time with me, having rightly concluded that my bad girl antics are attention seeking. Much has been written on this topic, including the fact that out-of-box urinating/pooping is the number one reason people get rid of their cats. I sure don’t want to get the boot, and I know Jan and 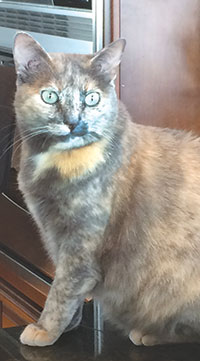 Jim can’t live without me, so I’m putting up with Jan’s problem solving measures.

The first step was to slather urine marking deterrents on every surface I’ve marked, or just thought about marking. Then I found her crawling around the bedroom closet using some fancy cat urine odor neutralizer. She then tackled the throw rug at the front door using same. Should these efforts at odor eradication fail, the next level of prevention will be to strap one of those purple “calming” collars around my tortie neck. Anyone whose met me knows that purple is my best color. There is also a calming dry food Jan may resort to, along with one of those scent plug-ins with “Feliway” gently filling the air to calm my shattered nerves. I really need to get my act together so I can effectively coach team Meow Power to greatness.

Thanks to you, Jan, Jim, and all the volunteers that helped me when I was scared and homeless…
I have a warm, loving,
caring, exciting home and furever purrfect family
and life! I will NEVER FORGET ALL OF YOU! You will ALWAYS be a part of who I am. I hope all your rescue kittens, old and young, are as fortunate as me and my family have been to have found each other.