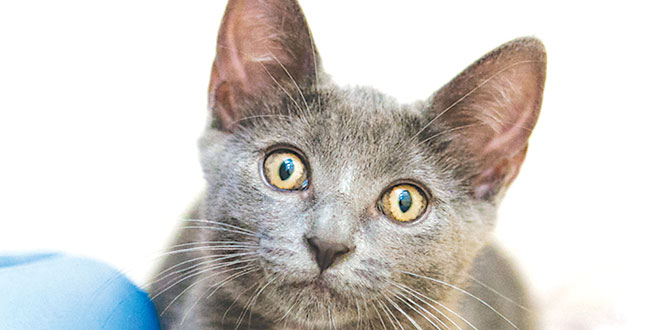 Dear Fellow Felines: I need to clear up any confusion among new readers who have come late to my wisdom-packed columns. I am, in fact, a cat, a one-time dumpster diving stray turned full-time resident here at For the Love of Cats, Marco Island’s no-kill cat shelter. I am, however, by no means your average house cat. For starters, I have my own newspaper column. Secondly, I am the shelter supervisor and manage a staff (remember, dogs have owners, cats have staff) of 70-80 volunteers who must heed my every request. And lastly, but most importantly, I am what is known as a “tortoiseshell,” a.k.a. an especially revered feline.

So what, you naively ask, is so great about meeting, living with, or taking orders from a tortie? We torties are renowned for our bossy, alpha-cat personalities and will run your herd as tight as a ship. We do tend to be vain, stubborn, clever, moody, fearless, demanding, and are generally intolerant of other cats taking up space in our households. Above all else, however, is the fact that we are fiercely loyal.

Then there’s our unique coat colorings: varying shades of ginger, apricot, black, grey, and brown. You’d be hard pressed to find a white

hair in a tortie’s coat. If you do, then you’re looking at a calico. But we’re not talking about them.

For the Love of Cats was founded in 2002 by island newcomers Jim and Jan Rich, a cat loving couple who froze in awe of the island’s hundreds of free-roaming cats. Back in the day, according to long time islanders, the place was literally crawling with cats. Starving felines congregated wherever there was a food source, especially around dumpsters and under boardwalks.

Over time, Marco’s feline population escalated to the point where local restaurants and hotels started complaining. One such establishment went so far as to put a $50 bounty on cats. But you won’t find a more effective rodent control program than a colony of cats! I’m proud to tell you that last year alone we found homes for nearly 200 cats and kittens, and saved the lives of 25 senior cats through our “Seniors for Seniors” program. Some of these cats are in the 15-16 year old range.

In fact, just the other week we rescued an abandoned 10-year-old Maine Coon mix over by the Esplanade. We had received several calls from concerned neighbors about a very sweet cat who was just skin and bones. We brought her in 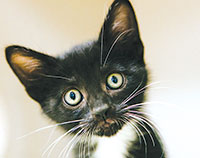 and, after a thorough medical exam, it was determined that the poor girl was severely malnourished, dehydrated, and very sick with liver and thyroid issues. Much to the delight of my staff, “Felecia” has found a new fur-ever home in which to live out her last years. But first we need to fatten her up. I sure wish that was my job!

In light of my staff’s herculean efforts at saving lives and finding homes for all those homeless felines, on April 12 I decided to honor them with a Volunteer Appreciation Party at Bistro Soleil where they enjoyed a very tasty luncheon of Salmon, Chicken Cordon Bleu, and chocolate mousse for dessert (sadly, none of these foods are healthy for cats which is why I had to sit this one out). During cocktail hour, my staff exchanged stories about their favorite felines and the shelter’s most heart-warming rescues. After lunch, awards were given out, special thanks were made, and everyone enjoyed a slide show put together by long-time volunteer Robyn Pritchard.

And just as I had anticipated, my clever seating chart paid off big time when three amateur athletes found themselves seated together at Table 3. After an hour or so of talking about yours truly, the talk turned 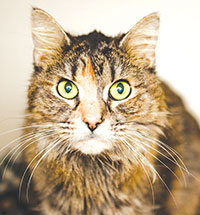 to triathlons. Before I knew it I had my feline-self a triathlon team to enter in the Marco Island Fitness Challenge Triathlon at the Marriott on October 4. Since I didn’t know what a triathlon was, I asked my team to fill me in on the ‘who, what, and why.’ The day will start at 8:00 AM with a quarter-mile open water swim, followed by a 15 mile bike ride, and will conclude with a 3.1 mile beach run. Writing that one sentence alone exhausted me so I’m going to take a brief cat nap.

But first let me introduce you to my team: Sammy Miller (swim), Karina Paape (bike), and Maria Lamb (run). All funds raised will be donated to For the Love of Cats so that that the shelter can continue its many life saving programs. Since this endeavor will require lots of time, planning, logistics, and training, I will feed you more details as they become available in upcoming columns. All you need to know now is that I – Naomi the cat – am the team’s official coach, thanks to my extensive background in nutrition and fitness. Next month I will announce the name of our team mascot. In the meantime, you can guess all

Our most pressing need now is a cat-tivating team name. And that’s where you, my loyal readers, come in. Please don your thinking caps and start brainstorming tasteful names; nothing too corny. “Naomi’s Tri-Team Naming Contest” submissions should be sent to Karina Paape at: chestergun@comcast.net. This is going to be so much fun and will keep me in the spotlight for the next six months! Aren’t I the clever girl!! And please don’t forget our 20016 Glamour Puss calendar photo contest which ends on June 1.

Enough about food, sports, partying, photos, contests, and yours truly. It’s shelter news time. Last month we hit the mother load of kittens when feral trappers Dan Flaherty and Bob Choate rescued three litters of kittens from the same community! Eleven in all, they ranged in age from 4 to 9 weeks old. All came from Port au Prince and were brought to my attention by a sharp-eyed staff member. One of the residents had been kind enough to establish a secure shelter under his home to protect the kittens and their moms from predators.

Speaking of predators, I have an update on “Rascal”, the door dashing Houdini cat who was attacked by a bobcat in early February. He suffered multiple puncture wounds, 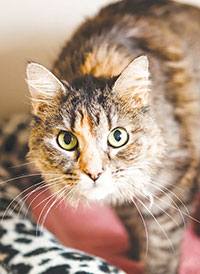 a broken hind leg, and nerve damage to another leg. We spent thousands of dollars on multiple surgeries to remove as much infection as possible (it was very deep), and to do skin grafts where his skin was severely damaged. After hobbling around the shelter in a cast for a couple of months, Rascal’s leg had to be amputated because the entrenched infection was endangering his life. It is believed that the only reason Rascal is alive today is because the family dog charged into the woods and scared off the bobcat.

To spend time with Rascal is to witness true gratitude and unshakeable trust. He is always happy, always purring, and is determinedly learning to walk on three legs. His stitches were recently removed and he has healed beautifully. My staff love and adore him so much that he’s been granted free range of the shelter. He can be found sleeping just about anywhere. Once he graduates from my physical therapy program, Rascal can go home. That’s what I call a happy ending.