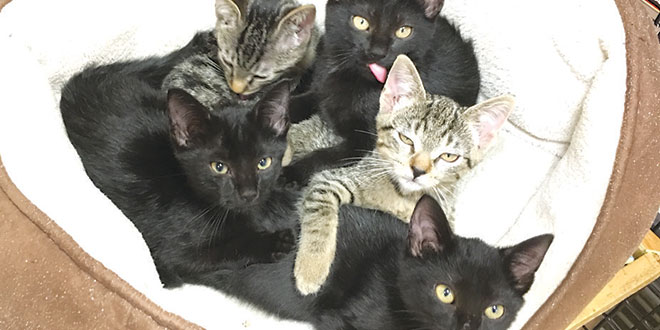 Merry Christmas to one and all! I know each of you is under the tree at this very moment, contemplating the wands, laser pointers, and catnip mice Santa Claws and Rudolph delivered in the wee hours of this morning, not to mention the salmon, turkey, chicken, and beef flavored treats spilling out of your over-stuffed stockings.

Thanks to the efforts of my staff here at For the Love of Cats (Marco Island’s no-kill cat shelter), the 154 cats and kittens we rescued this year are enjoying Christmas in the warmth and safety of loving fur-ever homes instead of being alone and hungry on the street.

But we sure had a couple close calls this year involving young female cats who were kicked to the curb because they were pregnant, an all too common scenario for which these teenage moms (females can get pregnant as early as five-to-six months old) were not at fault. The people in their lives simply did not care enough about them to have these gals spayed or micro-chipped. In all honesty, these poor mom cats should never have been outside in the first place. 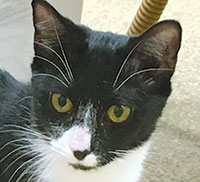 cat – for whatever reason – they must return the cat to us versus dropping it off at a kill-shelter (yes, people have really done this).

The two most heartwarming rescues of 2015 were “queens” Marty and Cherise (“queen” is the proper term for an un-spayed female cat; “tom” is the proper term for an un-neutered male cat). These moms and their tiny kittens were just days away from starving to death when hawk-eyed humans called my cellphone (of course I have a cellphone; I am, after all, shelter “supervisor”). I swiftly mustered the troops (volunteers), traps (humane), and tuna (bait), and dispatched my elite rescue team to the scenes of abandonment.

In ‘queen’ Marty’s case this was Walmart’s Garden Center on the day after Labor Day. For the Love of Cats co-founders Jan and Jim Rich got a desperate telephone call about a mom cat and four kittens who were hiding among pallets of mulch. It’s anyone’s guess as to how they got there. Jan estimated that it was about 110-degrees in the shade. With no source of food or water, the four three-week-old kittens were at death’s door. The rescue required extreme measures when Jim had to move a couple of pallets with a forklift to get to the kittens.

“It really is a miracle that the kittens survived as long as they did,” Jan said. “Marty must have done everything she could to feed them. She was skin and bones.” After all the hardship, Marty and two of her kittens were adopted by the same family!

Francisco is one of the lucky kittens who were rescued by For the Love of Cats from a parking lot.

Such happy endings make me blush!

In ‘queen’ Cherise’s case the scene of abandonment was at a condo complex on San Marco Road. Jan and Jim are pretty sure she was abandoned after her family figured out she was pregnant. Cherise had no choice but to give birth to her four babies in some shrubs between the buildings. With no food and water with which to nourish herself, Cherise’s milk dried up and her kittens became severely dehydrated and malnourished. In a courageous effort to save her family, Cherise prowled around the complex looking for food. She eventually found an open lanai door and discovered a bowl of food and water left there for a resident cat.

By the third day of stealthy dining, Cherise took a huge chance and brought her four frail kittens with her so she could stay near the food while protecting them. When the lady of the house discovered them in a corner of her lanai the next morning, she immediately called us and we sent out our rapid response team.

During a routine medical exam back at the shelter, we discovered that Cherise had two infected molars, which had to come out as soon as possible. Sadly, two of her kittens were far too ill to save. But the surviving two kittens were so cute together that they ended up in the same fur-ever home. And I of course found a great fur-ever home for queen Cherise.

Earlier this month we rescued a six-month-old, un-spayed kitten who was found wandering around Winterberry Drive. “Tracey” 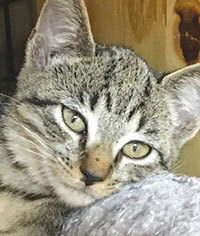 Catalina survived being abandoned at a parking lot without food, water or shelter.

is very shy, but also very sweet. Santa Claws promised that – once she’s spayed – she will end up in the purr-fect, fur-ever home where she will always be loved.

And thanks to a telephone call from an insomniac, we were able to rescue six kittens who were spotted behind a shopping center restaurant at four thirty on a recent morning. I’ve already “pre-adopted” one of them! In the meantime they are responding well to the TLC my staff (did I forget to remind you that dogs have owners while cats have staff?) lavishes upon them every day.

Before you finish reading this and pounce off to your next holiday party please remember that chocolate, grapes, raisins, onions, chives, garlic, turkey bones, and poinsettias are pure poison for felines. Personally, I prefer corn chips!

And yes, before you ask, my New Year’s resolution is the same as it’s been every year: let no cat be left abandoned, hungry, and alone. Happy New Year from all of us to all of you!

We have reports of several coyotes on the island in the area of Yellowbird, Jamaica and Nassau. They are by the 18th hole of the golf course as well. Please let everyone know that they are out there looking for food. We all know that cat is their favorite meal!!