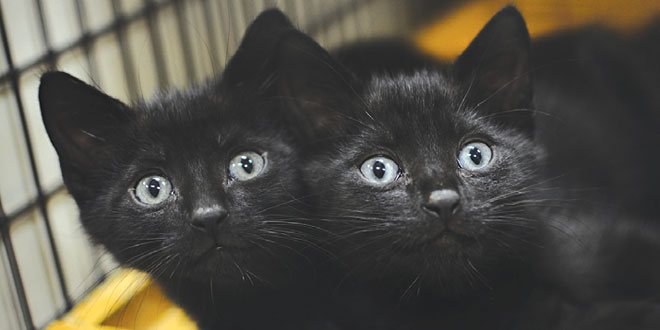 Samurai and Nero are thick as thieves.

Happy “Mew” Year! This is our 16th column together, a relationship that began on Dec. 14, 2012. I had no idea we felines had so much to share about the travails of living with our respective humans.

Now to the happiest news of 2013: Kitty Santa Claws granted my one and only Christmas wish, and, at long last, I gained unlimited entree into shelter co-founders Jan and Jim Rich’s home. For nearly a year, I’d been trying to get my paw in the door, but was relentlessly repelled by their top cat, Max, with back-up from his cohorts, Danny and Zoleyma. On Christmas Eve, however, this gang of three let me cross the threshold and take up residency in the house. I found out that Santa Claws made them promise to stop picking on me and let me into their circle of trust.

So, on the night of Christmas Eve — when not a creature was to be stirring — I slept next to Jan. I didn’t bite her once, but instead gave her lots of kisses for petting and comforting me through that first night. Talk about a lucky cat! So a big thank you to Santa Claws! But not to worry, I will continue in my role as shelter supervisor. I have assured all of the shelter kitties that I will be ever present to manage affairs and that I still forbid any furry business. There will be many pop inspections, and I will continue to train shelter newbies in the 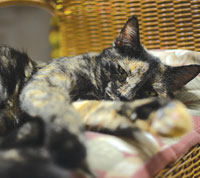 very fine art of slipping me some of their kibble. Come nap time, though, I’ll be high-tailing it to the big house.

It’s no secret that our staffs (remember, dogs have owners, and cats have staffs) continue to set absurd resolutions for themselves, like getting back to their high school weight, vowing to be more patient at Publix or even taking up an arduous triathlon training program. I, however, have only one resolution. We must continue finding perfect fur-ever homes for every one of our rescued cats and kittens. It is the least I can do for these undeservedly abandoned critters. Remember, I have lots of experience in this area since I myself am a former dumpster-diving stray.

I am so proud of what For the Love of Cats accomplished in 2013 under my tutelage. We rescued and found fur-ever homes for 172 cats and kittens; we spayed and neutered an additional 50 cats belonging to low income families; and we spayed and neutered another 57 strays who were being fed by good samaritans. Finally, a few of my staff tended to the island’s 300 feral cats, who live in managed colonies around the island. They get fresh food and water 365 days a year. If an emergency comes up (like when one colony resident was shot and needed surgery to remove the 38 caliber bullet), we take care of that as well.

So exactly what did it take for my staff and I to accomplish these impressive numbers? My 80 volunteers manned three, two-hour shifts per day, seven days a 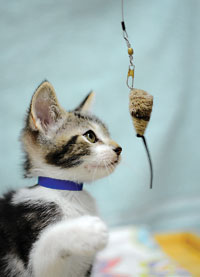 Percy loves to play. PHOTOS BY JIM AND JAN RICH

week. They went through 600 rolls of paper towels, 2,000 pounds of cat litter, $10,000 worth of food (that’s like 20,000 cans of Fancy Feast!), and $14,000 worth of medical and shelter supplies. We shelled out another $15,000 in out-of-network veterinary fees. This includes a year’s worth of spaying, neutering and surgeries to mend seriously injured kitties.

The biggest rescue story of 2013 for us involved two unrelated cats who were rescued at about the same time. The first, a beautiful black cat we named Tara, was found giving birth to her kittens by the side of a busy road. A passing motorist scooped momma cat and her first kitten up and took them to the nearby Animal Specialty Hospital in Naples where three more kittens were born. From there, the mom and her four newborn kittens ended up at the shelter. They were lavished with my staff’s legendary tender-loving-care and were soon thriving. Naturally, Tara’s kittens were named Scarlett, Rhett, Ash and Hamilton, and all found wonderful fur-ever homes.

Then along came Samantha, who was rescued from a restaurant dumpster. When she crossed my threshold, it was discovered this poor little girl did not have eyelids. She was going blind from the consequent eye ulcers caused by hair rubbing her corneas. Her person must have dumped her after realizing she was burdened by this likely-genetic defect. After several surgeries Samantha’s quality of life improved considerably. By this time, Tara was in the smaller of our two romper rooms — all by her lonesome self after her kittens were weaned. 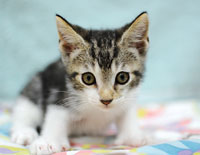 Percy poses for his close-up.

Jan decided to put Samantha in with Tara so they could keep each other company.

Before long these two gentle gals were inseparable. I made the executive decision that they absolutely had to be adopted together since they’d become best friends for life, a rare occurrence in cat country. Us female felines are pretty darn territorial, and generally don’t want another female near us. It is likely that Tara’s lingering maternal instincts embraced the suffering Samantha, thus forging an unbreakable bond. It wasn’t long before a lovely retired couple read about the saga of Tara and Samantha. Having just lost their 18-year-old Tortie (you know how adorable we Torties are), this couple gave the gals a wonderful forever home where they continue to be BFF’s. To see them together on their new lanai — usually hunting down those elusive geckoes — brings tears to my wizened eyes.

Another touching rescue was that of two kittens a man was getting ready to drown in a nearby lake when a group of sharp-eyed kids saw him. They ran over to see what was up. This unwanted attention apparently scared him away. The kids’ parents immediately brought the frightened kittens to me. At that point I took over their care, feeding, and training and ultimately found them fur-ever homes. I’m the best, aren’t I?

Namoi is a 4-year-old Tortie and a permanent resident at FLC. She is the shelter supervisor and takes her salary in food. She would love for you to learn more about For the Love of Cats at its website, www.floridacatrescue.com