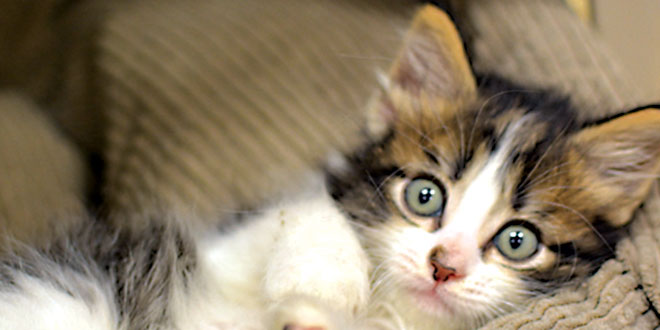 Merry Christmas and Happy New Year! Did all you boys and girls get what you wanted from Santa Claws, or did you forget to leave the milk and yummy treaties out on the hearth? Remember, Santa Claws is a true-blooded tortie like me who loves his treats.

I had a very Merry Christmas with the kitty elves, the shelter kittens and shelter founders Jan and Jim Rich. I supervised Jan for days while she decorated the place. My job was to test Jim’s lionel train set, but I got pretty dizzy watching the cars go round-and-round the track. Still, I gave the operation my stamp of approval.

Once the decoration phase of the operation was done, I helped Jan wrap gifts, which is not my favorite thing to do. I, however, did have a great time making those really skinny ribbons curly-cue, but Jan got nervous when I started eating them like spaghetti (these ribbons are very dangerous when swallowed, and can land you in the emergency vet hospital). So, I contented myself by sitting amidst all the tissue paper, tearing it into shapes only I recognized.

As you may recall, Santa 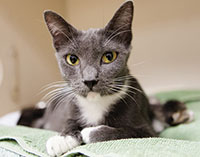 Claws granted my 2013 Christmas wish, and I became an official house cat in the Rich household. I have trained my three feline housemates — Max, Danny and Zoleyma — quite well. They obediently heed my every command. When I want to play, we play. When I want a nap, we nap. When I want to eat, I hiss them away. Jim and Jan have been a bit harder to train. For starters, they took me off corn chips because they claimed I was allergic. They cut back the number of hours I’m allowed to sit on the kitchen counter and stalk the refrigerator. They are, however, letting me continue with kitchen inventory inspections of the larders.

And to their credit, Jim and Jan continue to tolerate my clever alarm clock alternative: leaping from the 12-foot tall ledge above their bed and landing like an Olympic gymnast on Jan’s stomach. She hates when I do that, and says it interferes with her beauty sleep.

Enough about me. Let’s get back to business. Things were a bit rough here at For the Love of Cats during the days leading up to Christmas. We rescued an 8-year-old Ragdoll 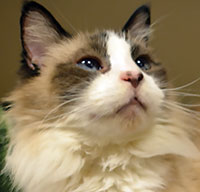 mix who arrived at a kind couple’s door. She was covered with burrs, and her paws were very sore. We named her “Tiffanie.” We also managed outbreaks of both ringworm and upper respiratory infection. Both are highly contagious and required quarantining two whole litters of adorable kittens. I felt really bad for the two kitty babies whose upper respiratory problems led to eye infections which required treatment every two hours. You can imagine the burden this places on my staff of 80.

Not only are there strict protocols to follow in the shelter, but all of our volunteers live with felines and must take Hazmat precautions when they return home. They must shed their clothing and shoes outside or in the garage before entering the house. We don’t want their kitties to catch one of these tenacious infections. Such dedication. I love you guys for all you do for the shelter kitties!

During my three-week Christmas break, I was flipping through a recent issue of “The New Yorker” and ran across an incredible story titled: “Pets Allowed: Why are so many animals now in places where they shouldn’t be?” The story investigates the current fad in 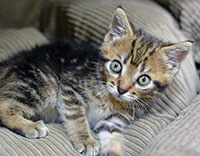 which sane doctors and psychiatrists are prescribing “Emotional Support Animals (ESA)” for their anxiety-ridden patients. It is believed these animals soothe the suffer’s soul; they can go anywhere their human goes. Last year, approximately 11,000 ESAs were registered, up from just 2,600 in 2011!

The reporter who wrote the story, Patricia Marx, visited various hot spots in New York City, accompanied by one of five different ESAs. She visited the Frick Museum with a 15-pound, 13-inch turtle, a “red-eared slider” aptly named “Turtle.” Marx next arrived at the Chanel store with a 30-inch long, Mexican Milk Snake named “Augusta.” She told a sales clerk there she was looking for a purse to go along with her snake! Ha ha, right!

When Marx got hungry, she borrowed a friend’s 26-pound “Royal Palm” turkey named “Henry” and took a $30 bus ride to a popular delicatessen. For a train trip from Hudson, NY to Niagra Falls, Marx’s nerves were soothed by the companionship of a 105- pound, 4.5-foot tall Alpaca named “Sorpresa.” After they returned to the city, Marx switched animals and left town with a 26-pound pig named “Daphne,” who boarded a Jet Blue flight in a 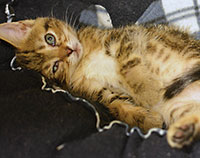 The prize for the smartest emotional support/service animal, however, goes to “Oscar,” a cat who can predict when patients in a Providence, RI, Alzheimer’s facility are dying. Staff at the facility noticed an odd pattern to Oscar’s behavior. He would walk the halls sniffing and observing patients, then curl up to sleep with certain ones. These patients often died within two or three hours of his arrival.

Whenever Oscar’s staff noticed him sleeping with a patient, they would notify the family of the patient’s impending death. How does Oscar, a shelter-rescue, know the end is near? It is believed that some type of chemical is released shortly before death, and that Oscar can pick up this scent. Oscar’s story is beautifully told in a must-read book titled “Making Rounds With Oscar” (by Dr. David Dosa and published in 2010). Oscar’s story showcases the savvy and intelligence of us felines.

Now what about those New Year’s resolutions?