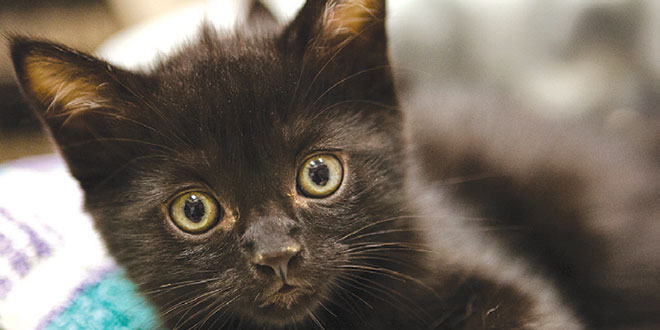 Happy Halloween! This is my favorite day of the year because I get to race and slither through the shelter like a wild cat, wielding my tiger-sized goody bag and collecting the annual toll I exact from my staff of 80 volunteers. It matters not whether it be people food or top-end cat food (none of that dry stuff, yuck!), just so long as it isn’t that dreadful tasting junk food dogs eat with such gusto. It goes without saying, but obviously I’m going to say it anyway, dogs lack the discriminating palates we felines enjoy.

Enough about me. During the days leading up to Halloween this year, I — as supervisor extraordinaire here at For the Love of Cats — decided that we would not adopt out any black cats. There is lots of lore and superstition surrounding these unwitting felines during Halloween, and I couldn’t take the chance that one of my kitty trainees would be cast into harm’s way.

To protect these babies, shelter founders Jan and Jim Rich installed an eery Halloween deterrent that nearly scared the claws off these four little black waifs. There is a creepily authentic looking human skeleton standing guard the shelter’s back door, and if that isn’t frightening enough, standing next to said plastic skeleton is a second, smaller skeleton, which bears a remarkable resemblance to Yours Truly. The back is arched. The eyes are glowing red. The fur that is no longer there is standing on end, and clinched in its teeth is a freshly dismembered, blood soaked human finger. There is no denying that this is a “minnie-me.” There is even a sign under my effigy’s chin that alerts would be catnappers of black cats that my other worldly body double is standing guard. A chorus of goblins greets people when they reach for the back gate. Ha ha!

The four black kittens caught wind of all the Halloween hype about evil black cats and rumors that black cats are the hardest to find furever homes for. To calm their trembling paws and jaws, I had to come up with a plan before they got any more bad info, so I started reading them bedtime stories about the lore and lure of black cats. These are the facts of black cat life:

For thousands of years, black cats have been regarded as mysterious creatures in possession of supernatural powers. Black cats are frequently associated with witches which is how the two became Halloween icons. Back in the 17th century, it was believed that witches could change into cats. This was especially true during the Salem witch hunts. As the witch scare mounted to paranoia, many innocent women and their black cats were burned at the stake. It is believed that the witch-cat metamorphosis could be made nine times, thus accounting for the belief that cats have nine lives. 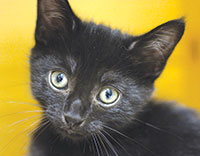 some humans still believe that death will become them should a black cat cross their path under moonlight. In Normandy (I can’t let this opportunity pass), seeing a tortie foretells death by accident, and somewhere else on the globe (I’m very bad with geography), it is believed that torties protect their humans from fire and fever.

In many countries, cats are held in high esteem and believed to be progenitors of good luck. Scotts believe that a strange black cat’s arrival to the home signifies prosperity. In the English Midlands, a black cat given as a wedding present is thought to bring good luck to the bride. Wives of fishermen believe that their menfolk will return safely if a black cat is kept in the house.

In the south of France, black cats are known as “magician cats.” Local superstition has it that humans who feed these cats well and treat them with the respect they deserve will enjoy good luck. English sailors believed that keeping black cats happy would ensure fair weather when they went to sea. Consequently, black cats became so high priced that few sailors could afford them.

The findings in a recent study by the University of California, Berkeley, found that, “Feline typecasting can have a negative impact on adoption rates.” For example, torties are largely regarded as being intolerant, “and are frequently typecast as having too much attitude or ‘tortitude’.” And all this time you thought I was making that word up. The study also suggested that black cats are less adoptable, but I don’t believe that for a second. This brings up the last bedtime story I shared with all of the shelter cats so there’d never again be confusion on this issue of black cats.

Ten or more years ago, one of the first litters we rescued came from The Vineyards in Naples. In keeping with the shelter’s naming conventions (it’s all in where you come from), the one black kitten in the litter was named “Merlot” and found a furever home on Marco. Years later, Jim got a strange phone call from a humane society in Buffalo, NY. An elderly woman had turned in a very friendly black cat she’d found dumpster diving near a busy road the week before Memorial Day. The cat had no collar but was microchipped. The registered owner’s contact information proved worthless.

But guess what? For the Love of Cats is always registered as a secondary contact. One of my staff flew up to Buffalo to bring the cat back to Marco where a lovely elementary school teacher adopted her. Do you know how Merlot paid this lady back? After Merlot’s new furever human got home from work one day, Merlot kept meowing and carrying on in such a way that her human figured something must be wrong, and sure enough, there lay a dead pygmy rattlesnake, which had managed to bite Merlot during the fatal struggle. Merlot and 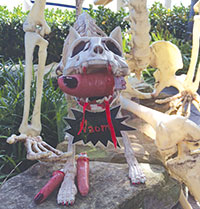 her human, bearing said dead snake, took off for the vet where the day was saved and everyone lived happily ever after. Merlot’s story convinced these younglings that black cats are the smartest of all cats! Well, after torties that is.

My bedtime stories were a wonderful relief to the four black kittens who are currently enrolled in “Naomi’s Boot Camp for Discarded Cats.” The program is meant to ensure that our kitties find “furever” homes and includes training in a few very specialized skills: How to make humans think you’re crazy about them; How to manage too much TLC (love nips only — never draw blood from the hand that feeds you); and How to hang upside down like bats while in one of our two “romper” rooms. Visitors view this last trick as particularly bewitching.

For those rare few who don’t know the history of how I became the shelter supervisor, here’s my recently published Cliff Notes guide: I was heartlessly abandoned and forced to resort to dumpster-diving in order to survive. Thriving at this period in my life was not an option. Then, on the luckiest day of my life, I was rescued by Jim and Jan. Unbeknownst to them at the time, however, I was an ankle biter. When this habit came to light, I was labelled “un-adoptable” so Jan and Jim were stuck with me. Furever! No one wants a cat that bites. Apparently humans worry that the mailman or the grandchildren will stop coming to their door for fear of “Fang” the biting cat.

For the record and to illustrate my devotion to equal opportunity, I just want to say that I have bitten every volunteer who has crossed the shelter’s threshold. Many have been bitten more than once.

And now for “Naomi’s Stunt-of-the-Month”: On October 1, I appointed myself the official inspector of Jan and Jim’s kitchen cabinets. Before Jan goes grocery shopping, I can take as long as 30 minutes — per cabinet — taking inventory. When Jan returns with our family’s groceries, I go back into the cabinets to make sure all the empty food spots are once again filled.

When meal time rolls around, which isn’t often enough for me, I take it upon myself to help Jan locate various ingredients for whatever meal-of-the-hour she is cooking. This is how she puts it: “I have lost several eggs and have to guard the sour cream, and lets not even talk about trying to keep meat safe!” Sometimes they go out to eat because it’s so much work keeping me out of their food. They are among the many who do not consider cat fur to be a condiment! ‘Til next time.