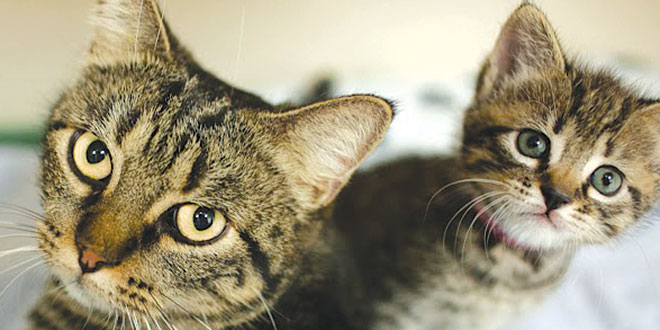 Now that I have — literally — Thanksgiving under my belt (boy, was that turkey and green bean casserole tasty), it’s time to talk about Santa Claws, elves, Christmas cookies (yummy smelling, but deadly for cats), stockings, tinsel, fake snow (what is snow by the way?), glass ornaments, those awful scented candles and, of course, that silly mistletoe your staff stands under in expectation that someone will kiss him or her.

For you newbie felines experiencing your first Christmas, the joys of the day are many: dangling ornaments, presents wrapped in pretty paper (great for shredding into hundreds of pieces) topped with colorful ribbons (fun to wrestle with, but dangerous when swallowed), vats of food and hordes of visitors traipsing in and out of the front door offering us felines many fabulous opportunities to duck out and escape the chaos.

And then there is the tree — that most enticing of all things Christmas. Who among us hasn’t heard of a fellow feline scaling a Christmas tree and replacing the tree top ornament with their feline selves? Don’t believe me? Well then, I have one doozy of a Christmas tree 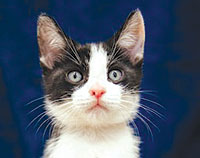 story to tell you!

My dear, late friend “Patches,” a fellow tortie, told me a fabulous scale-the-tree story just before she crossed the Rainbow Bridge earlier this year. Apparently, her original staff (remember our feline mantra: dogs have owners, cats have staff) failed to have her spayed when they got her as a kitten. When she wasn’t even a year old, she found herself pregnant and homeless. Her humans blamed her for getting pregnant and kicked her to the curb when, in fact, it was really their fault she hadn’t been spayed.

A kind, unsuspecting woman agreed to rescue said tortie, even after she picked her up, held her in her arms and discovered she was rather pregnant — a fact that the people who found her had failed to share. Patches had her kittens on Mother’s Day a few years ago, found her four babies wonderful furever homes, then settled into life as a spoiled house cat.

On a cold and dreary northern night, her staff put up an eight-foot-tall live, sap-dripping tree (think Chevy Chase’s Christmas Vacation). It was her first Christmas, and, still being a kitten herself, Patches was intrigued to discover an actual tree growing indoors. 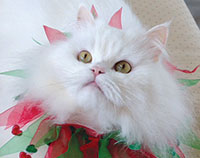 human spent days adorning said towering tree with gorgeous ornaments, the majority of which were glass and irreplaceable, there came a Sunday morning when Patches’s staff decided to take her two needy labs for a walk. That’s when she got busy. The tree so intrigued her that she did what any self-respecting tortie would do: She climbed it. Ah, you justifiably ask, why would an otherwise intelligent tortie do such a thing? Well, silly, to get to the top, of course!

Unbeknownst to Patches, however, her staff had failed to anchor said tree to the ceiling and walls with bungee cords. Consequently, when Patches summited the top, she and the tree came crashing down. There was glass everywhere. Tangled strings of lights, tinsel and candy canes covered the white wall-to-wall carpeting. The tree had stopped breathing. Patches herself was covered in sap, making her claim that a tornado had roared through the house ridiculous.

When her staff returned from walking the dogs, they couldn’t believe their eyes. What happened to the Christmas tree? And where was Patches? Apparently, the noise that accompanied her toppling of the tree sent her running for cover. When she emerged a few hours later (the 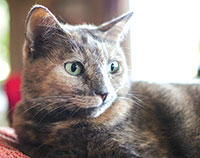 clean-up alone took three hours), her sappy fur was irrefutable proof that she was the culprit. You could say the cat was out of the bag. The moral of the story, my fine fellow felines, is do not follow in Patches’ paw-steps. To do so, risks getting a stocking full of dog treats.

For those of you who’ve been sleeping in a cave all fall, let me remind you that today is Black Friday. Your humans go berserk over this day, which doesn’t sound like much fun since, after all, it is called “black” Friday, but I discovered why today is so named. Humans get up in the “dark” and “black” early morning hours so they can go stand in line at the mall in an effort to be the first one to hit the sale racks. What ever happened to online shopping?

I, however, have a stress-free solution to your staff’s Christmas gift woes: visit our booth, run by some of our shelter kittens, at the Farmer’s Market any Wednesday between now and Christmas. We have our wonderful 2015 “Glamour Puss” calendar which, by the way, doesn’t have a single photo of yours truly within its glossy pages. But you still might want to buy one or two as gifts 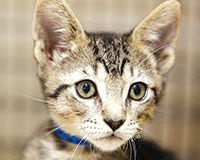 for your non-Naomi loving friends. We also have a nice t-shirt with new graphics this year, as well as a sterling silver cat pendant (with a red heart on it of course), and lots of fun car magnets.

I’ve received a couple of intriguing “Santa Claws” letters forwarded to me from the North Pole:

I need a book on how to deal with a neurotic human. Signed “Freud”

There are six cats in this house. Could you take five and give them to some kids who asked you for a cat for Christmas? Signed “Bonzilla.”

I would like another cat to play with. The Siamese you left last year keeps me up all night talking. Signed “Polar Bear”

The only Dear Santa Claws letter that really matters, however, is mine:

Please make Jim (Jim and Jan Rich founded my “no kill” cat shelter in 2002) take more naps so I can clean his face and snuggle on his chest. If you grant this one, humble wish, please cancel my original request for a stylist. I don’t know what I was thinking. I loath being groomed 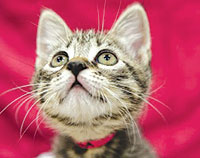 or having a pink bandana wrapped around my neck. If there is so much as a sliver of a hint that a brush is coming my way, I will use my teeth if I have to. Signed “Your most esteemed tortie, Naomi”

And no, I haven’t forgotten to share with you my “stunt of the month.” If you may recall, my last year’s Christmas wish came true when I gained full house-cat status in the home of shelter co-founders Jan and Jim. Whenever I’m feeling unloved and forgotten (after all, I have to share the joint with three other cats), I march over to the bedroom door, and cry as pitifully as possible so that someone will come play with me. My first choice on the playground is “Max” because he comes up with the most clever games. I will, however, settle for “Danny” who likes to chase me into said bedroom where we play “Dust Ruffle Paw Grab.”

Happy and safe holidays to all and to all a purr-fect holiday.