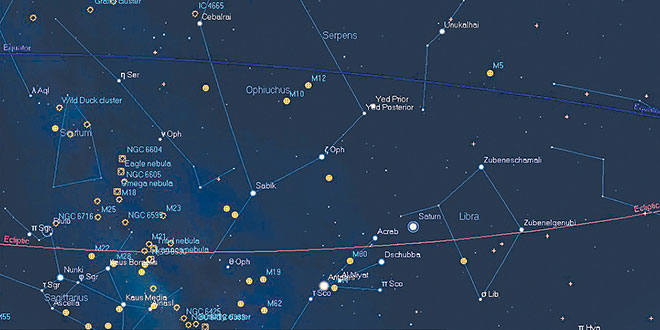 Looking South about halfway to the zenith, 11:00PM July 10th. Don’t forget to look at Saturn if you have a small telescope. SUBMITTED PHOTO

Tonight the Summer Milky Way is rising, almost looking like the beginning of dawn; just above it is the large, but fairly faint constellation of Ophiuchus. It is usually drawn as a man grasping a snake, and as one might expect the name in ancient Greek means “serpent-bearer.” Recently it has become famous (again) as the 13th zodiacal constellation for, as you can clearly see from the chart, the ecliptic runs through it. Every few decades the media treats it as a major discovery, but it’s been that way for all of human history. Ptolemy recorded it more than two millennia ago in his famous work The Almagest. To be fair, the official boundaries of the constellations were not established until 1930. Without official boundaries people were free to ignore Ophiuchus (and did). As an additional note, although the ecliptic does not run through these constellations, planets can appear occasionally in Orion, Perseus, Auriga and Andromeda.

Back before Roman times Libra (the scales) was considered part of Scorpius (the scorpion); the Romans found this inconvenient and split off Libra as it’s own constellation. Some trace of this remains in the names Zubeneschamali (the northern claw) and Zubenelgenubi (the southern claw). Please do not ask me how to pronounce these names! Besides the jaw-breaker of a name, Zubeneschamali has the distinction of being the only naked eye star with a greenish tint. Can you see it? I have never been able too. In the third century BC this star was recorded as being brighter than Antares and 350 years later it was recorded as being the same brightness as Antares. Both sources are considered reliable. Nowadays Antares is ten times as bright as Zubeneschamali!

By international agreement the International Astronomical Union (IAU) is the only body that can name celestial objects, and the public has never had a say – until now. A few stars and a number of exoplanets have had names nominated for them by local organizations in a number of countries. The IAU has organized a worldwide vote to see which names prove the most popular. The winning names will be promoted and encouraged for use in popular media and professional journals. In order to vote you must register first at www.nameexoworlds.org/ voting closes soon so hurry up and make your choice known! If you are stuck on which name to vote for, may I suggest Mnesileüs (a mythological son of Pollux); this name was nominated by your own local club for a planet orbiting the star Pollux.

Mr. Usher is President of the Everglades Astronomical Society which meets the second Tuesday each month at 7:00 PM in the Norris Center, Cambier Park, Naples.