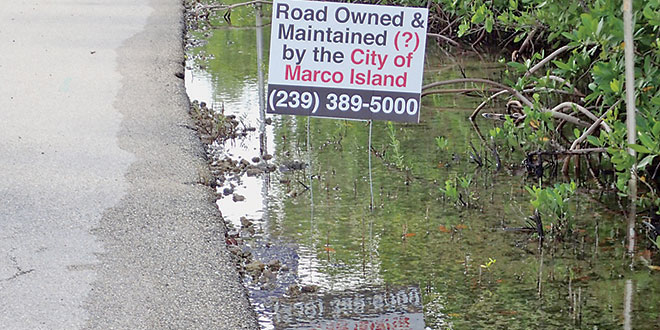 Photo by Steve MorganOne of the signs posted on September 14 stands forlornly in the Gulf waters, which are slowly taking over Goodland Road.

At about 3 PM on September 14, about a dozen signs were posted along Goodland Road between San Marco Road and Angler Drive. No witnesses have come forward. The signs, tongue in cheek, and also apparently unpermitted, purported to give credit for the poor condition of the road to the City of Marco Island (CMI), which has owned this stretch of road since 2002. In what was one of the quickest known responses to a road problem by CMI, the signs were gone about an hour later. “On my way home today, at 4:15 PM, I saw a Marco city truck stopping and tossing [the signs] in the back of the truck,” Greg Cameron said, “I’m not sure who placed them, but they sure seemed to get attention fast.” CMI didn’t get them all. One was retrieved by a WINK News van before being spirited away. It was featured in a news cast at 5:30. The WINK news report was one of four local TV news reports from Goodland Road that week. The flood prone and crumbling road has become a cause celebre around the county and somewhat of an embarrassment to CMI. I am aware that whoever paid for and posted these signs was fed up with CMI’s perceived neglect of the road.