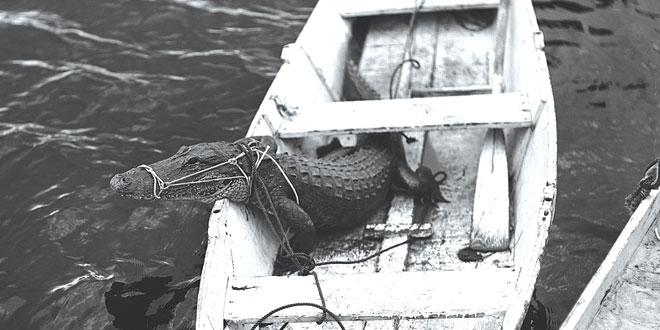 In September of 2010 the Marco Island Police Department received a concerned phone call saying that someone had discovered a number of large bones near the shore during a very low tide at Hideaway Beach. Sergeant Hector Diaz, who responded to the call, could see that the bones were projecting from what appeared to be an old wooden barrel – the remains of which were adjacent to the bones, making it appear the body had once been placed inside the barrel. Gene Erjavec, a Marco Islander who has worked on many local archaeological digs was called in to help identify the bones. He concluded that “It appeared to be a whole alligator stuffed in an old wooden barrel with an unusual stone found in the barrel, similar to a ballast stone. The barrel looked as if it had been buried in the sand for decades perhaps over a century.”

So numerous questions arise: Why would an alligator be placed inside a wooden barrel and when did this happen? Also, how did both the barrel and the alligator end up in the Gulf of Mexico to be eventually buried along a Marco beach? Lastly, why is there a single stone, looking like a ballast stone, found in the barrel?

While it is perhaps impossible to know what really happened, let’s explore some possibilities: First, and obviously, the animal found, an alligator, was not uncommon. After all, Marco Island is just west of the Big Cypress and the Everglades. In fact, after George Storter, Jr. established his trading post in 1892 in what is now known as Everglades City, he reported having traded for and sold 100,000 alligator skins in a six week period. He acquired them from locals as well as the Seminole Indians, with his principal market being bulk purchasers for northern markets. Ten years before that, it was reported that it was not uncommon for hunters to have taken a thousand of the reptiles from just one small lake in the Big Cypress. By 1898 it was reported that “the principal dealer on the west coast of Florida bought three or four hundred hides daily from about fifty hunters and kept a schooner running to Key West with hides and returning with cargos of salt, ammunition and grub. The price paid alligator hunters for hides varies 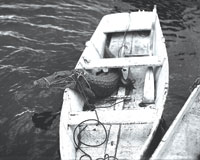 Alligator specimen captured alive by A.W. Dimock in 1906 in the Ten Thousand Islands and tied inside his skiff. IMAGE 46709 AMERICAN MUSEUM OF NATURAL HISTORY LIBRARY

from one dollar for those measuring seven feet, or over, down to ten cents for such as measure less than four feet in length.” The cargos of salt, ammunition and grub brought back to our area were used to restock the alligator hunters so that they could continue to hunt, skin and cure more hides.

At the time, the most efficient way to harvest alligators quickly was at night using a method called “Fire-hunting.” It was described as being so deadly, “that after a hunter has swept the surface of a river with his light it is scarcely worthwhile to look for alligators in that stream (again).” This method was described by A.W. Dimock, a retired New York stockbroker who travelled extensively in Southwest Florida: “Fire-hunting for alligators is a business, is butchery—bloody and revolting.” Yet he also describes his first nighttime adventure at fire-hunting as all “romance and thrill.”

As Dimock directed the lantern mounted on his forehead at an alligator in a small lake, the boat’s pilot moved the boat closer to the dull red reflected gleam from the gator’s eyes, when they got closer they could determine the size of the animal from the distance between his eyes, and Dimock was advised to wait until he could hold his gun so near the alligator’s head that the “bullet smashed his skull.” After that night Dimock says he never fire-hunted with anything other than a camera. Dimock wrote in his book “Florida Enchantments,” published in 1908, that: “The fire-hunter has so nearly wiped out the saurian inhabitants of the rivers and lakes of the coast that their pursuit no longer affords him a living.”

On Marco Island just south from Hideaway Beach, where the alligator and barrel were found, is Clam Bay; years ago it was described as being full of alligators (the bay is east of the current South Seas Condominiums). This bay once flushed out into the Gulf of Mexico through Clam Slough which cut through today’s beachfront, just south of the current Tigertail Beach. A. W. Dimock mentions one evening in 1908 when a Marco boy was told that a small “colony” of five alligators had been seen at Clam Slough: “I’ll go down to-night and git ‘em, said he.” Dimock describes that later on that moonless night the boy sculled a leaky little canoe out 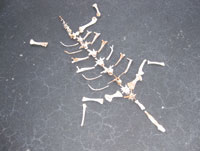 the Big Marco Pass and down the beach to Clam Slough where he killed the five gators. The next day the boy was seen at the Marco store swapping the five hides for three dollars worth of ammunition, tobacco and grits.

But with alligator hides so valuable, why go to the trouble of catching a live one? Around the late 1800s and early 1900s, there was money to be made in capturing wild animals in Southwest Florida and transporting them to northern zoos and aquariums for exhibits. In fact, between 1904 and 1913 A.W. Dimock and his son, Julian, captured a number of local animals and sent them north to New York zoos. They reported having captured a bear, manatees, a dozen pelicans, crocodiles, alligators and other local animals.

The procedure to catch an alligator alive is described as using a “tiny harpoon, stopped down so it could only penetrate an inch beyond the bard and inflict but a trifling wound. We put a little strain on the harpoon line, the purpose of which was to enable us to follow the creature until we could get a rope around his nose. After a few hours of captivity almost anything could be done with the reptile… (but) these alligators often played possum with us and allowed themselves to be tied in a skiff without a kick….(we) were always on the lookout for a chance (for them) to make trouble and once when we were quietly sailing down a river, towing a skiff in which we had tied a ‘gator, the creature thought we had forgotten him and breaking one of the lines which held him, bit a piece out of the skiff, capsized it and rolled over and over with it in the water.”

Another method to capture a live alligator was described by A. W. Dimock; “no ‘gator, large or small, can resist a peculiar call that resembles the grunt of a pig.” In 1906, a local Florida Cracker near the Broad River in the Ten Thousand Islands, demonstrated to the Dimocks this grunting technique to get alligators to surface.

What about the “ballast” stone found at Hideaway Beach? It is not a native south Florida rock and one is left wondering if there were more stones that had been used to weigh the bottom of the barrel down to perhaps offset 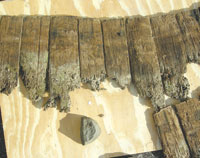 Remains of Wooden Barrel found partially submerged along Hideaway Beach along with a small rock looking like a ballast stone found inside. PHOTO By GENE ERJAVEC

the thrashing of the alligator (?); or perhaps there was only one stone that someone had used to throw it at the gator while in the barrel? We do know from the bone structure of the gator that it is estimated to have been approximately five feet long. The head, tail, feet and some other parts of the anatomy were missing when the remains were found at Hideaway Beach.

Of this mystery the one fact we can clearly establish with some reliability is how the barrel and gator got to where it was found. That is, the barrel with the alligator trapped inside must have washed off the deck of a boat to have ended up completely buried along Hideaway’s beachfront.

While A.W. Dimock was a writer, his son, Julian, was an excellent photographer and he took literally thousands of photos of Southwest Florida wildlife, as well as some of the animals they captured for transport to northern zoos. Fortunately for us, the Dimocks also wrote and illustrated a number of books and magazine articles about their experiences in Florida. During the time they were in Southwest Florida they used Old Marco as their headquarters and ventured down through the 10,000 Islands as well as inland toward Henderson Creek, Immokalee and Deep Lake.

The Marco Island Historical Society has been fortunate to reach an agreement with the American Museum of Natural History in New York to exhibit some of the Dimock photos taken in Southwest Florida in the early 1900s, and this new photo exhibit will be shown at the Marco Island Historical Museum from January 2 to March 29 of 2014, in conjunction with a new book coming out regarding the Dimocks’ travels and adventures in our area, entitled “Enchantments” by Jerald T. Milanich and Nina J. Root. The Everglades Society for Historical Preservation contributed to the upgrading of the local photographs in this new book.

So as we speculate about the recent find from Hideaway Beach, we are left glimpsing into a moment in time when Florida creatures were strange and unique, and a time that while the vast majority of alligators were discarded in the wild after being skinned; only a few were kept alive to be transported north for an eager public to view at exhibitions.

I thank Hector Diaz, Gene Erjavec, and Dr. Edward Saeks, for their contributions of information for this article.