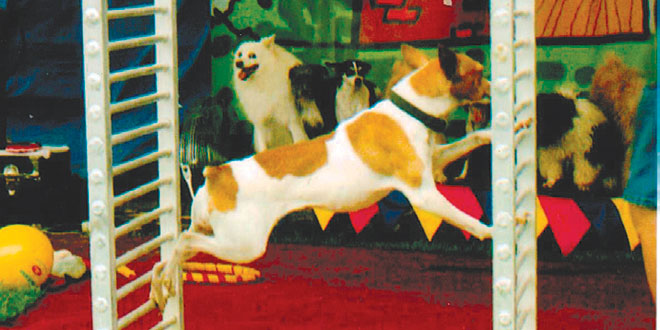 Ladies and gentlemen! Boys and girls! Children of all ages! Prepare to be amazed on January 12, as Muttville Comix takes center stage at the Marco Island Lutheran Church.

What exactly is Muttville Comix, you ask? Featuring former Barnum & Bailey’s circus clown, Johnny Peers and his 16 dogs, Muttville Comix is a mix of comedy and audience participation – centered around Johnny’s spectacular pups. “They’re show-offs,” he admits. “Once the music starts they know it’s their moment and they absolutely thrive on all the attention.”

No kidding. These dogs can do just about anything. From riding skateboards, to walking tightropes to balancing on the top of a long pole, they are a sight to see! And they have all been trained by Johnny, who considers them to be his kids. “They’re with me 24/7. Every day we practice, but just a little at a time. I use tons of treats to train them and gain their trust.”

Many of Johnny’s mutts are rescued from shelters and even right off the street. He began working with dogs when he adopted his first, Freckles, a Beagle mix from the Humane Society in 1972. Since then, he has rescued and trained more than just a few canines. While performing as a clown at Circo Tihany in Argentina, Johnny picked up two stray dogs 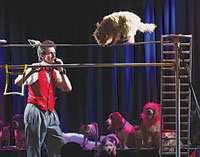 right off the street and brought them home with him.

His current mix of dogs contains terriers, a basset hound, a pointer mix, chihuahuas and many other mixed breeds rescued from shelters. Each dog has its own tricks and its own personality. There’s Noodles, the Bassett Hound who, “likes to get into trouble all the time. You always have to play off of what Noodles wants to do because she goes at her own pace.” There’s Sir Winston, the Pointer mix who is the “Leader of the Pack.” He also only answers to “Sir.” Joey, a Fox Terrier walks backwards on two wires while Chico, the Chihuahua mix is the “Star of the Show.” “He looks forward to performing but he’s getting to be demanding. He want’s more money, but I can’t just let these dogs walk all over me,” states Johnny in a deadpan tone.

This is no ordinary dog show, that is for sure. That’s because Johnny Peers is no ordinary man. He grew up in the circus as his father sold concessions, but Johnny spent most of his time backstage hanging out with the clowns. This is where he discovered a love for performing. Graduating from the Ringling Clown School, he worked with Ringling Brothers for many years as a clown. Johnny and his dogs became the center ring act for four years 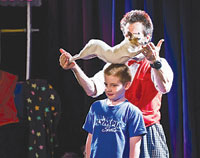 Eventually, he went solo with his dog act and now travels throughout the United States featuring his professional pups. They have performed at Disneyland, Busch Gardens, Big Apple Circus and even the White House. In 2003, Muttville Comix became the Animal Planet “Pet Star” Champion.

While Muttville Comix has performed at the largest of venues, Johnny enjoys the smaller, more private acts such as the upcoming show at Marco Lutheran Church. “I really enjoy these kinds of performances because it makes it a much more personal experience. I can see everyone’s faces and know that the dogs are bringing them joy. It’s also nice to know that I’m working for a good cause.”

Sponsored by the Marco Island Kiwanis Club, proceeds from the show will go towards the Kiwanian’s mission of “Serving the Children of the World.”

“It’s been a long and interesting ride. But I love what I do. I love to perform and show what my dogs can do. And they love it too.”

Muttville Comix will perform two shows on January 12. Showtimes are at 2 PM and 6 PM. Tickets are $10 for adults and $5 for children under 7. Tickets are available at Critter Cafe, 810 Bald Eagle Drive, Mutual of Omaha Bank, 1770 San Marco Road and every Wednesday at the Farmers Market at Veterans Park. Get your tickets now because they’re going fast!