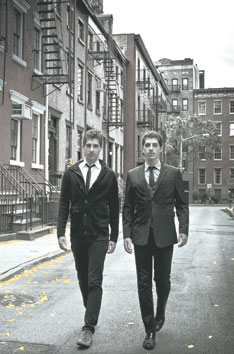 Will and Anthony in New York City. SUBMITTED PHOTO

Two superb young singers – Will and Anthony Nunziata – will be performing at the House of Mozart, Thursday and Friday night, February 2nd and 3rd. The 6:00PM performances will feature well-known and loved Broadway hits. They’ll add some classical Italian songs, and have some fun with the audience, and themselves, by improvising a bit of comedy. Mozart’s is expecting a sell-out for the two evenings.

Although the two twentysomethings have not yet been to Marco Island, they have strong Florida connections. Their parents were snowbirds for years, and their maternal grandfather, Bill Wendell, visited Marco Island many times. According to Will Nunziata, “My grandfather went to Marco Island often, and he loved it. We’re excited to be coming. We’re really looking forward to it.” Bill Wendell was David Letterman’s announcer for a number of years.

Will and Anthony have sung their way around the world. They gave a notable recital at New York’s Avery Fisher Hall as part of the 80th birthday celebration for renowned musical composer and lyricist Stephen Sondheim. They have also appeared on popular television programs including Good Morning America and the Rachel Ray Show.

The brothers have received outstanding reviews in The Wall Street Journal, New York Times, Theater Scene magazine and Playbill. Their performances have been described as “exuberant and upbeat”, “engagingly brassy professionalism”, “young, attractive, funny and charming”, and “playing off one another in a way that Dean Martin and Frank Sinatra bounced off one another in those irreverent Rat-Pack days of another era.”

The House of Mozart is located in the Shops of Marco on Barfield Drive. While enjoying the music and comedy, patrons will be served a five course dinner prepared by Chef Alfred Schnagel and his wife, Manuela. Dinner and show (beverages not included is $65.00. Call 239- 642-5220 for reservations and information.

Will and Anthony are releasing their debut album at Barnes & Noble in New York on February 9th. Those attending the concert will be able to get advance copies at The House of Mozart.