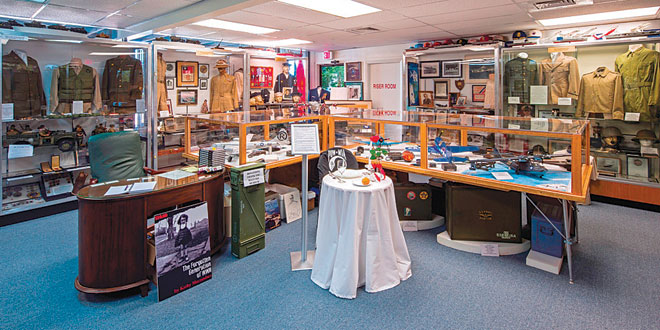 The Museum of Military Memorabilia opened August 1, 2011 in the Commercial Terminal of the Naples Municipal Airport in time for a memorial event, “Keeping the Spirit of ’45 Alive”. The opening of the museum was preceded by a year of planning which began with a request to place some of the existing organization’s military memorabilia in the airport for public display.

Robert (Bob) McDonald, president of the museum established in 2006, was looking for a new location for the growing collection of memorabilia. He met Theodore (Ted) Soliday, then Executive Director of the airport, at an event honoring Armed Forces Day on May 15, 2010. His proposal was modest, to install a few display cases of World War II military aviation artifacts in the airport. Mr. Soliday was interested in the proposal and a series of meetings ensued with airport personnel and Bob McDonald.

An unused room in the Commercial Terminal was offered and a formal proposal, which was made to the Naples Municipal Airport Authority Board, was approved by the Board on June 16, 2011.

The Naples Municipal Airport was a World War II training center for the Army Air Corps in the early 1940’s and is a worthy location for the museum which houses more than 10,000 military artifacts. Bob McDonald has donated at least 80% of the memorabilia which

includes uniforms, pictures, models of military aircraft and land vehicles. There are displays of artifacts from all the branches of America’s military services and opportunities to sponsor displays and events offered by the Museum.

One of Bob’s precious possessions, donated to the museum, is a model of a B29, the type of aircraft which dropped the first atomic bomb on Hiroshima. The model is signed by two crew members of the Enola Gay bomber, General Paul Tibbetts, pilot and Dutch van Kirk, navigator. It is also signed by Michael N. Kuryla, coxswain on the USS Indianapolis which carried critical parts of the atomic bombs to the U S airbase on the island of Tinian.

The USS Indianapolis was torpedoed by a Japanese submarine and went down in 12 minutes. Three hundred crewmen went down with the ship. Nine hundred men were in the water for four days before they were spotted by U S Navy searchers. They had to battle exposure, dehydration and shark attacks. They had little water, no food and not enough life boats. Michael Kuryla was one of 316 survivors of the Indianapolis.

Another interesting collection of artifacts includes a photograph of Pappy Boyington and Captain Masajiro “Mike” Kawato, Japanese Air Force, together in Los Angeles, California in 1977. Autographed copies of each pilot’s biographies are also on display. Pappy Boyington, Colonel

Gregory Boyington, USMC, winner of the Congressional Medal of Honor and the Navy Cross, was the leader of the Black Sheep squadron in the South Pacific in World War II.

Captain Kawato was the pilot who shot down Boyington and his crew on January 3, 1944. Boyington spent the next 20 months in Japanese prisoner of war camps. When the two men met finally more than 30 years later, they embraced and greeted each other with great enthusiasm.

Colonel Boyington was asked. “Is all the old animosity gone?” Boyington replied. “There was never any animosity. It never existed with pilots. After I was captured several Japanese pilots came to talk with me, laughing and joking.”

Bob McDonald and Gregory Garcia, vice president of the Board of Directors that governs the Museum, shared an interesting story about the oldest World War II combat paratrooper in Collier County until his death last year. Bill Haubrich had been an Airman in the 82nd Airborne Division of the Army Air Corps. When Bill first visited the museum he was taken with a reproduction of an M-42 paratrooper jacket from the Band of Brothers hit series on HBO. All the insignia on the jacket are authentic and it is signed by four World War II paratroopers from other units of the Corps. He visited the museum every Tuesday afternoon and 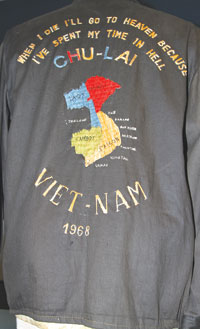 donned the jacket to welcome visitors. He shared stories about his experiences and explained the meaning of the contents of the display case.

Bill met Jack Antaramian in the community once and he was wearing his 82nd airborne hat. Jack, who also served in the Air Force, chatted with Bill and learned about the museum. The very next Tuesday, Jack visited the museum and discovered that he and Bob McDonald, the museum’s president, had both served in the 101st Airborne Division at Ft. Campbell, Kentucky. Their service actually overlapped in the early years of the 1960’s.

Mr. & Mrs. Antaramian generously sponsored the display case which holds Bill Haubrich’s memorabilia and the Band of Brothers jacket. They also underwrote the publication of the museum’s brochure which depicts Bill holding a photograph of himself as a young airman. Bill parachuted into Germany during the Allied invasion in 1945. He described himself, not as a hero, “just one of the lucky ones.”

Visitors to the museum will have the pleasure of meeting Joyce Lehrke, docent and storyteller, who knows the experiences of the veterans almost as well as they do. She considers the men whose memorabilia is on display and veterans who come to visit, heroes and delights in one of her favorite duties, collecting hugs 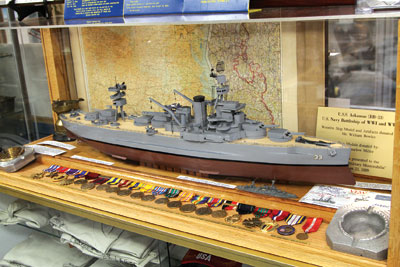 from heroes. Generally the veterans tell her that they do not see themselves as heroes but as men who were lucky to have returned and lived out good lives.

She shared the story of Thurlow Miller, USN who spent five years on the USS Arkansas. He grew up in Michigan and tried to enlist with two buddies. They were accepted but he was rejected because his weight was too low by three pounds. He went home, ate bananas, drank milk and returned to the recruiting office. He made the weight and joined the navy. He survived the war but his two buddies did not come home. Thurlow Miller earned the French Legion of Honor for his service on Normandy and across France.

Bob and Greg recounted the story of Radioman/Gunner, Joseph John Karrol who, with his pilot, flew scouting missions during the Battle of Midway which took place June 4-6, 1942. They were airmen in the BVS 5 unit flying a SBD Dauntless bomber. It was Radioman Karrol and his pilot who found the last remaining Japanese carrier still in the battle. Karrol radioed back to the Yorktown that they had the location of the Japanese carrier. “In a persistent and vigorous effort to maintain contact” with the Yorktown he radioed out steady reports while firing on harassing enemy aircraft until he succeeded in 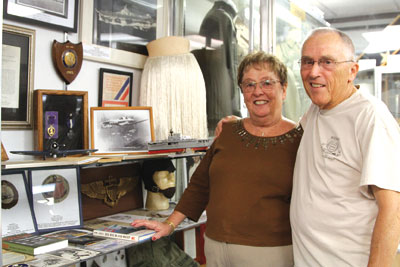 Joyce Lehrke and Bob McDonald at a display case containing a skirt made from parachutecord. The skirts were commonly traded by our servicemen for fruit and vegetables.

driving them off. His information enabled bombers from the Yorktown and other American carriers to attack and destroy the enemy carrier the following day. It is believed that the crew of one of the bombers from the Yorktown, knowing there was insufficient fuel to make it back to the ship, made a kamikaze dive into the Japanese carrier and took it out. Joseph Karrol, in his early 20’s, and his pilot both lost their lives that day during the furious air battle. Their ship, the Yorktown, was lost that same day. Karrol and his pilot received the Navy Cross for finding the enemy carrier. The Presidential Citation is pictured in this article. Radioman Karrol was awarded the Purple Heart and the Navy Cross posthumously. His son, also Joseph Karrol of Punta Gorda, was born shortly after his father’s death and has honored his memory by loaning the museum his father’s Citation and picture and other artifacts.

The museum houses artifacts from World Wars I and II, Korea, Vietnam, and there is a display of uniforms worn by U. S. Army Second Lieutenant Kimberly S. Haus who served in Desert Storm. She was assigned to the 41st Combat Support Hospital, 1st Army Medical Group. On display is a desert camouflage set including full gear, a woodland camouflage jacket and other military clothing and equipment. 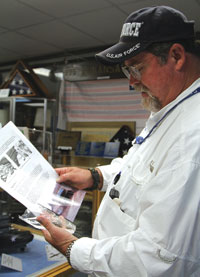 A new arrival, as explained by Gregory Garcia, with historic personal description.

Lieutenant Haus made her donation through her parents whose winter home was in Punta Gorda.

There are so many stories and so many heroes. Visit and learn about the sacrifices made for our country so that we can live free. Our freedom is not free. It must be paid for by the courage and conviction of good Americans. Thank God, in every generation and in every ordeal we have faced, there have been enough good Americans to stand up for our right to live as free citizens of our beloved country.

On Memorial Day, Monday, May 27th the museum will have an expanded display of some of their collections in the lobby of the Commercial Terminal. There will be several military vehicles on view in front of the building, as well. The day’s event is scheduled from 10AM to 4PM.

Hours are 10AM-4PM, Monday to Saturday, Noon to 4PM on Sunday. The Museum of Military Memorabilia is housed in the Commercial Airlines Terminal of Naples Municipal Airport, 500 Terminal Drive, Naples, FL, 34104. Easily accessible from Airport Pulling Road, turn at North Rd., right on Terminal Dr., to the entrance of the terminal building. Entry to the museum is free. Donations are gratefully received.

Memberships are available at several levels and applications can be obtained at the museum or by contacting museum officers and personnel at 941-575-0401 or 239-682-0461. E-mail: museummiltry1@embarqmail.com Web site: museum-mm.org