Murder, mayhem and mystery! Oh my! 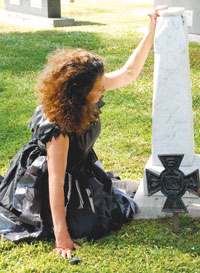 Sisbarro pays her respects at the grave of William T. and Elizabeth H. Collier at the Marco Island Cemetery, one of the stops on her Marco Murder and Mayhem Ghost Tour

Meet Martha Horror (aka Gina Sisbarro). She wants to take you on a tour through Marco Island’s history, but it is not the history of sunshine, sand and shells. Her’s is a “ghost tour” through the unsolved murders and mysteries of Marco’s last 150 years.

“I love history,” says Sisbarro, decked out in her full Martha Horror costume. “Marco Island is loaded with history and mystery.” In addition to the new Marco Murder and Mayhem Ghost Tour, Sisbarro also works for Marco Office Supply and directs productions at The Marco Players Theater.

She will host the inaugural ghost tour on Thursday, Jan. 16, at 5:45 PM. Tours will be held monthly on the first and third Thursdays through season, and hopes to continue through the summer. Beginning and ending at the Olde Marco Inn, visitors will be ushered along the 6-8 tour stops aboard an old-fashioned trolley car courtesy of Dolphin Trolleys. Tickets for the two-hour tours are $35 per person, and can be purchased online at www.marcomurderandmayhem.vpweb.com.

Sisbarro’s idea for the ghost tour has been more than a year in the making: “On vacations, I always check out museums, historical sights, ghost tours. I want to know who built the cities, who the founders were — even the darker side of the history.”

Her first stop with her idea for Marco: the office of local 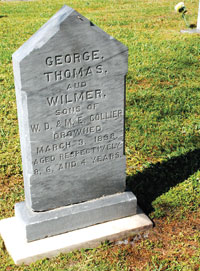 Tragedy struck the Collier family on a trading trip to Key West. Pictured is a the headstone of George, Thomas and Wilmer Collier, sons of Captain William D. Collier, who drowned when the trading ship was struck by a storm.

attorney and historian Craig Woodward, who regaled Sisbarro with some of the more macabre stories and unsolved mysteries in Marco Island’s past, including those surrounding the Calusa tribes, conquistadors, pirates, the curse of Captain William D. Collier, the disappearance of Deputy Sheriff J.H. Cox and his family in 1925 and the tragic deaths of two teenage girls in the Marco Island Cemetery in 1973.

Next, she enlisted Denis and Lisa Mergue, owners of Bistro Soleil at the Olde Marco Inn. The inn is purported to have a female ghost in residence, for whom Lisa has a healthy respect. While Lisa and Sisbarro sit in the bar at Olde Marco Inn, Lisa recounts a few times when the ghost has made her presence known — mostly slamming doors.

Even so, Lisa was eager to be a part of the tour. “Why wouldn’t you partner with Gina?,” Lisa asks. “It is a great idea. We have this amazing historical building. Why not?”

So armed with Woodward’s history and Mergue’s venue, Sisbarro teamed with the city of Marco Island’s 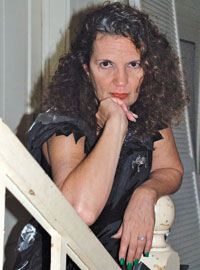 Parks and Recreation department to conduct two test tours this past February and March. The tours were packed, and the ghosts did not fail Sisbarro. In particular, the ghost at the Olde Marco Inn was reported to have breathed on visitors and to have made cell phone cameras go off on by themselves. One woman even captured a “pink orb” in a photo.

“There was a lot of interest, a lot of locals. They were enthralled with the stories,” notes Sisbarro. She hopes the new tours will be as well received. “I want this to be good for tourism here,” she says. “I would love for this to become one of Marco’s main attractions.”

(Reporter’s Note: I am not sure if I believe in ghosts or not, but I am easily frightened. Your average, run-of-the-mill bump in the night sends me diving for cover. At night, I turn on every light in the house as I travel through it. That being said, as I sat in the Olde Marco Inn conducting the interview for this story, Sisbarro mentioned that the ghost had been annoyed with the intrusion of the preliminary ghost tours earlier this year. Within seconds of this statement, my brand new pen full of ink mysteriously stopped working. Not sure if the ghost had anything to do with it, but to quote Robert L. Ripley, “Believe it, or not.”)