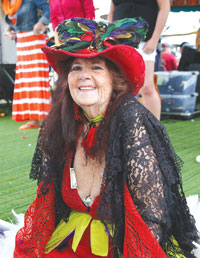 Queen Mary spent the weekend at Stan’s, mingling with her fans, helping the new Buzzard Princess and Queen hopefuls and collecting those good old Yankee dollars.

It was the 30th Annual Mullet Festival. Thirty years of celebrating the bait fish that grew Goodland from an old, empty pineapple farm into a full-fledged fishing village. The weekend-long event began on Friday, Jan. 25 and wrapped up at sunset on Sunday, Jan. 27.

Friday’s kick-off was all about getting folks in the mood to dance, drink and filet some fish. Saturday’s festivities honored that tradition with the usual mullet filleting contest. Buckets of mullet were prepped by some of the fastest fish handlers in town, and then the mullet went to the fryer or the smoker. The best ways to eat the fish — fried, smoked or as a dip — were served all over town.

Speaking of all over town, that’s where the people were. Thousands of them as usual. The entire island takes part in its own way. All the other restaurants in town help celebrate offering festive drinks, special attire and live music.

The Goodland Civic Association hosted its annual Pancake Breakfast over the weekend where multitudes came to fill their stomachs before heading for a buzzard punch or two… or five. The Pancake Breakfast was once again a hit on both Saturday and Sunday.

The newest non-profit in 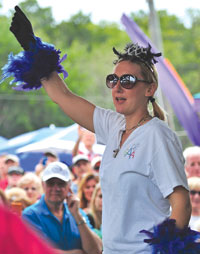 town also participated during Mullet Festival for the first time. The Goodland Arts Alliance held an Arts & Crafts Fair, featuring fine works by its members. Held at MarGood Harbor Park, people came in droves to peruse and purchase. The show added another element to the weekend, offering an extra activity for all who came to Goodland to celebrate the mullet.

The Buzzard Princess and Queen were crowned over the weekend as well. On Saturday, Sydney Pope of Naples won the title of the 30th Annual Buzzard Princess. Her wings flapped higher than any others as she seemed to fly off the stage while performing the “Buzzard Lope.”

On Sunday afternoon, former Queens took the stage to perform the “Buzzard Lope,” showing the hopefuls how it’s done.

The competition was quite fierce among the top three finalists. And then there were two. After a LOT of flapping and fancy bird-like leg work, the audience’s cheers finally guided emcees Billy O and Jeff Hilt to recognize Carol Roberts as the winner. A resident of Goodland, the newly-crowned Queen couldn’t have been more delighted. Dressed head to toe in feathers, it was easy to see why Carol was chosen by the crowd.

When the sun set on Sunday, Stan’s celebrated the end of another successful Mullet Festival; and on Monday morning, the clean and quiet streets hid the fact that thousands of people had been roaming the town only hours prior.