A legacy of music for Swarthmore 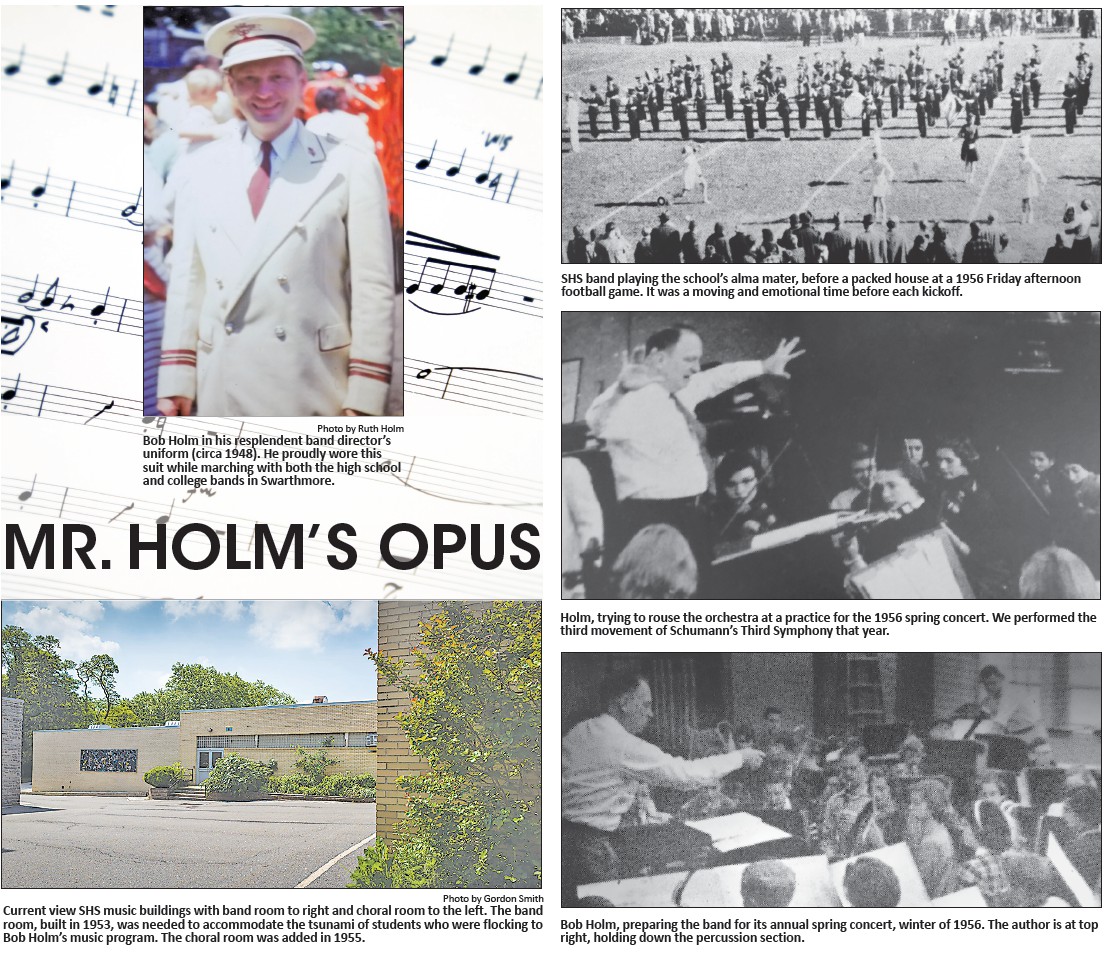 When I saw the movie, “Mr. Holland’s Opus” in 1996, I was reminded of my high school band and orchestra director and how much he must have struggled to place instruments in our hands and introduce music into our lives. It was his life’s work. Thankfully for me and countless students, he performed this work while Director of Music at Swarthmore (Pennsylvania) High School (SHS) during his 29-year tenure there. I was one of his first recruits in the third grade, when he placed a violin (parents couldn’t abide it) and then a drum into my hands, and in the fifth grade, when he talked the school board into buying a pint-sized bass fiddle for me and then taught me how to play it. I ended up being SHS’s only bass player and captain of the marching band.

The bass fiddle was not the last investment in music made by SHS at Mr. Holm’s behest. At great expense, separate buildings for instrumentalists (1953) and choral singers (1955) were added. I am no physicist, but I would be surprised if those two buildings didn’t comprise at least 20% of the total classroom space of the school. SHS itself had only about 500 students from seventh to twelfth grades, and was supported by the small neighboring communities of Swarthmore and Rutledge with a total population of about 7,300. Undertaking this construction was a tremendous commitment to SHS’s music program. It was a resounding vote of confidence for Holm and for what he was doing. Those buildings, a brick and mortar legacy of Mr. Holm, were filled with music and the industry of 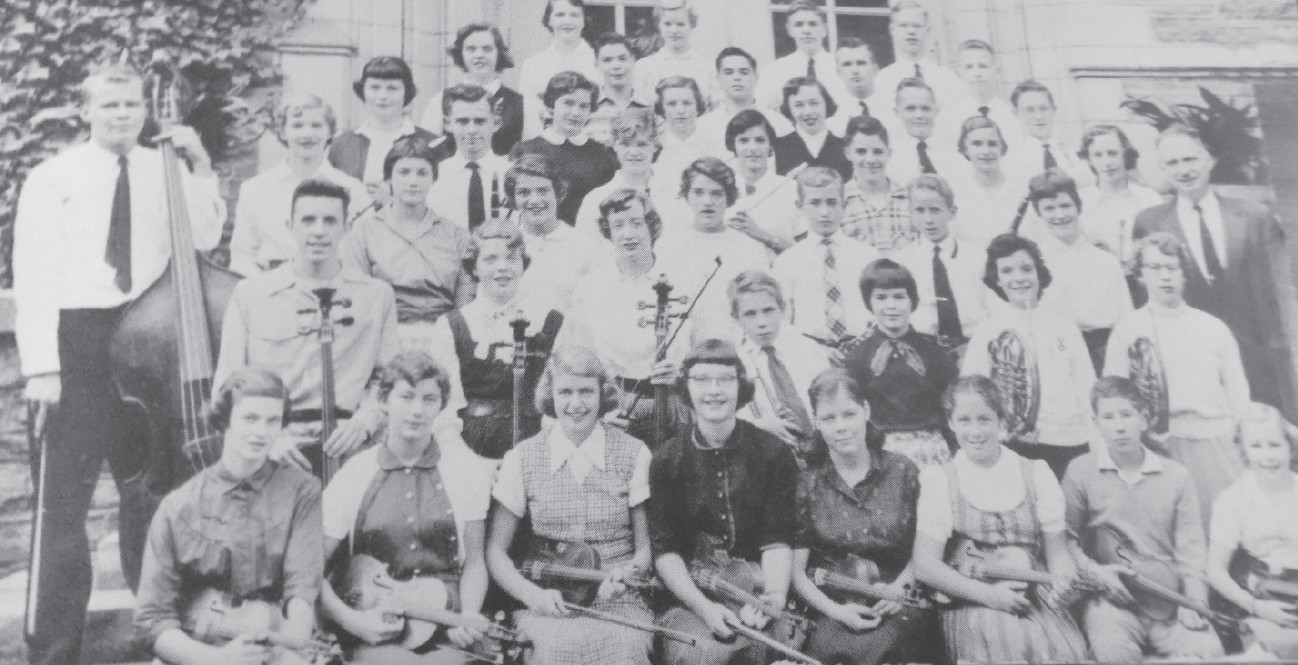 The SHS orchestra in 1956. Author at left with unorthodox grasp of the school’s only bass fiddle. Holm at middle right.

high school students, until SHS closed its doors, due to consolidation, in 1985. Today the school buildings are filled with elementary students. The band room is silent, used only for storage.

In 1945, at the age of 33, Robert M. Holm was hired by SHS as a band and orchestra instructor. Since high school, his stops had included bachelor’s and master’s degrees in music, teaching music in a rural area, where he presided every week at 16 one-room schoolhouses, reached only by often rutted or unpaved roads, and an enlistment in the U.S. Navy, which took him to the Pacific Theater during WWII. In 1945, SHS had already earned the reputation as one of the top academic schools, public or private, in the Philadelphia area. It had been sending its graduates to Ivy League schools for years. Now in 1945, it was about to be inundated with Bob Holm and his music. Swarthmore would never be the same.

It was Holm’s goal to raise the music department to the level of excellence that was being attained in the physical education department. Millard Robinson, the head football coach, was just beginning his run of undefeated seasons and seemed to have a recruiting lock on every boy that wasn’t nailed down. Holm began by beating Robinson to the punch, using his connection to the elementary school orchestras to recruit kids barely out of kindergarten. As he improved the quality of these orchestras, the school board began lessening its purse strings. Placing a shiny new trumpet or violin in the eager hands of a second or third grader was all the sales pitch he 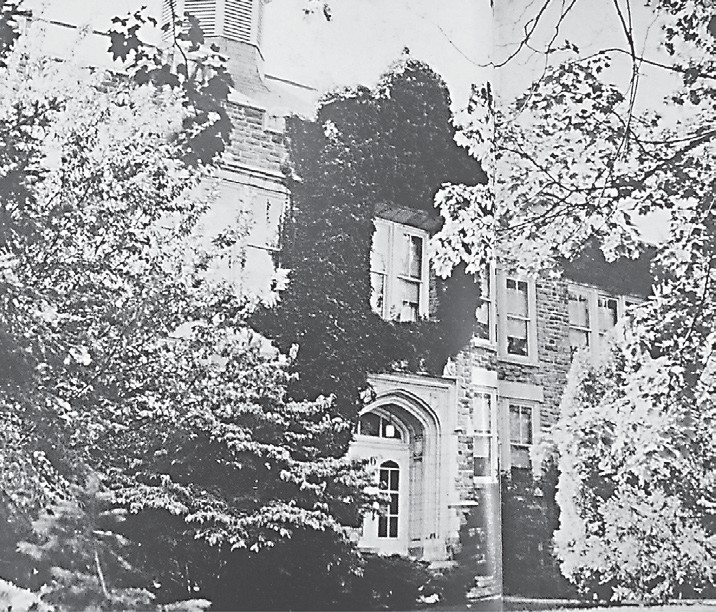 needed. Holm taught these kids to play or brought someone in who could – and got the school to pay for it. Acting as feeder programs for the high school, most of the kids stayed with the program through graduation. Many were good enough to play in college bands and some went on to professional careers in music. All of us developed an enduring love and appreciation for this wonderful medium.

The football team was the pride of the town; the marching band – not so much. As the elementary orchestras fed more and more capable musicians into the high school, Holm added more snappy marches into the band’s repertoire. The townspeople started to notice, both at football games and in the one-mile march from the high school, across town, to the football field. It was good to be alive, when after another win, the band would march through the heart of town playing the “Washington Post” march or a rouser by Sousa.

In the 12 years I was in the Swarthmore school system, I can never recall Bob Holm missing a practice or performance of his band or orchestra. They were his babies and he never let them down. Every Monday, Wednesday and Friday at 8 AM sharp, he would put the band through its paces, in the newly built instrumental building. On Tuesdays and Thursdays, the same time frame was devoted to the orchestra. The rest of his day was spent preparing for the next performance, and seeing that his students were learning the rudiments of their instrument of choice. He never yelled at us no matter how badly 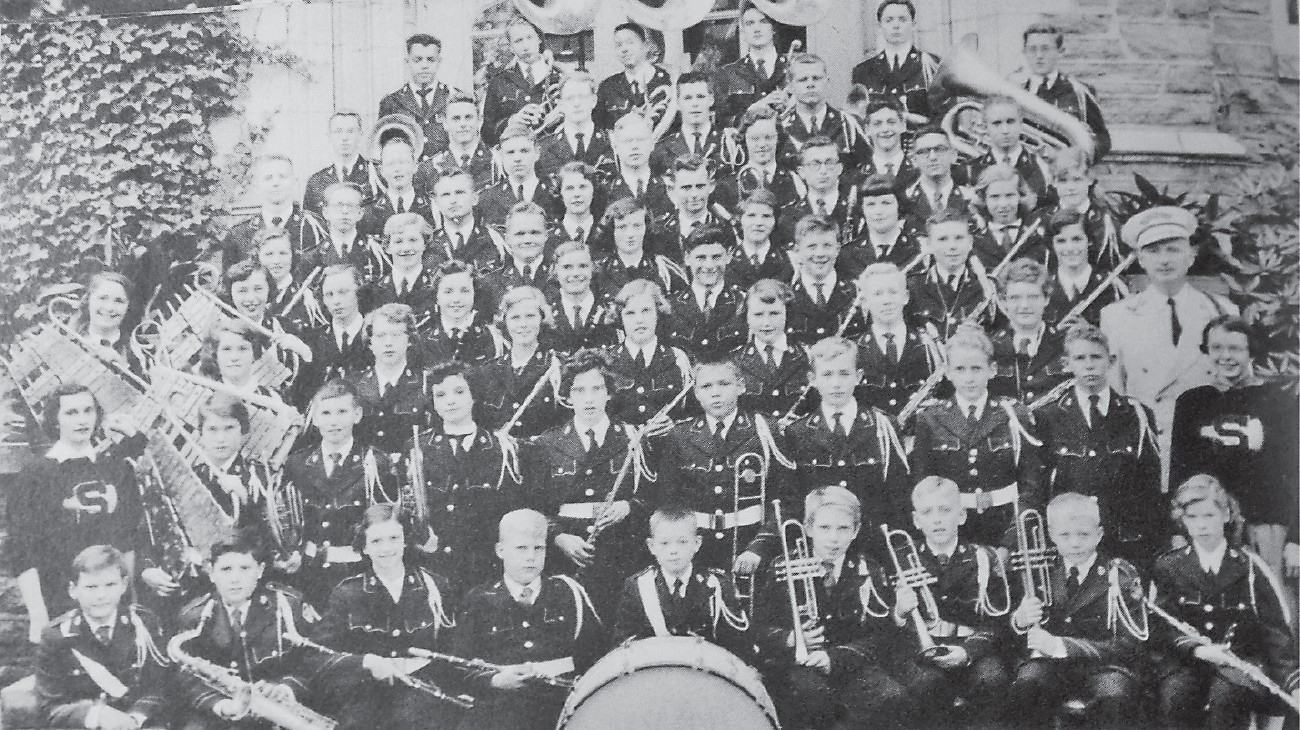 The SHS band in 1956. The author is fourth from the left, second row from the top. Holm at middle right. The first row of students are obviously products of Bob Holm’s early recruiting strategy.

the practices were going. Mr. Holm did look a bit beleaguered at times, when the inattention and horseplay (I was the main culprit) of the students bit into practice time. Mostly, he let us have our fun and kept us coming back for more. We would have followed him anywhere. Each home football Friday, Holm would don a resplendent garnet and white band director’s uniform in which he led us proudly through town and on to the football field. He had that uniform custom made. It was really something to see. He wore it again on Saturday when Swarthmore College, having the same school colors, had a home football game. The college had hired him to lead their band also.

In those days, he was bursting with energy and ideas. His Sundays and weekday nights found him performing in different forums, as the leader of his own small swing band, “A Family Affair,” which included his son Bob Jr., his daughter Carol, and his beloved wife, Ruth. They played at some of the swankiest country clubs in Wilmington and Philadelphia, and at weddings, dances, garden parties, and concerts throughout the Philadelphia suburbs, even to the Jersey shore. His band was ubiquitous and in demand. Holm’s sweet and sparkling trumpet was everywhere – until it wasn’t. In June 1974, at the age of 61, Bob Holm retired from the Swarthmore school system. He was regaled at a huge party, with live music, given the key to the Borough of Swarthmore and sent off with his wife on an all-expense paid tour of Europe. He continued performing with his dance band until 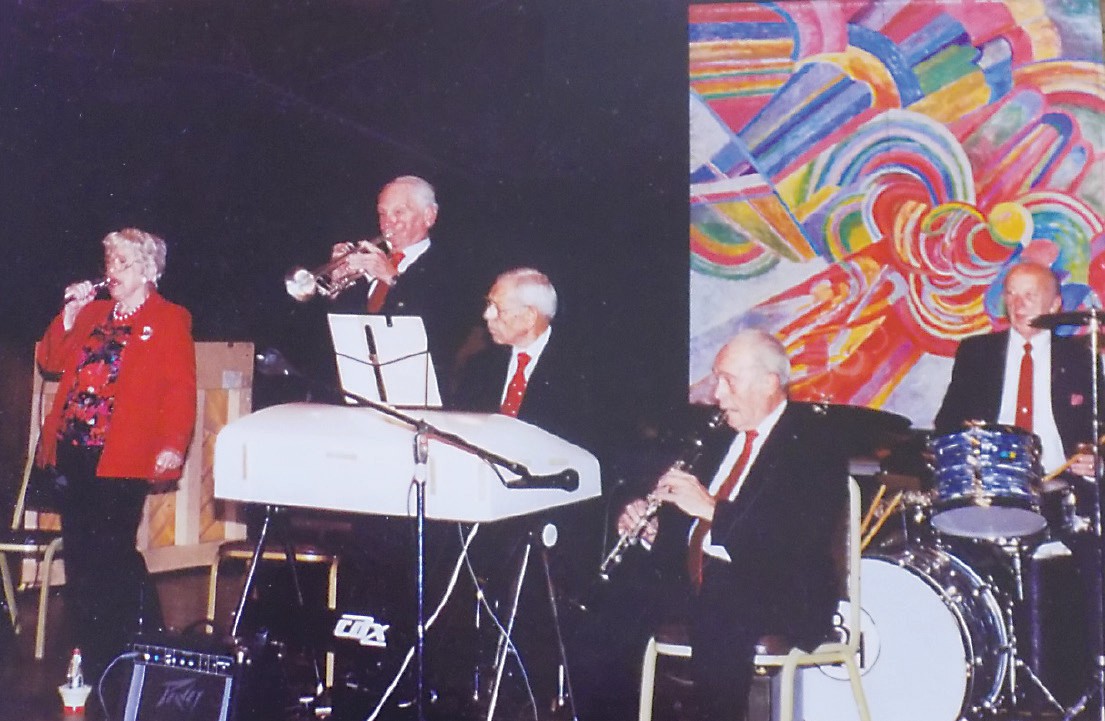 Holm’s popular and much in-demand dance band, “A Family Affair,” in a 1993 Christmas party performance. Ruth Holm (at left) sings the vocal. Holm (standing) plays along on a muted trumpet.

December 1998, a month before his death. He additionally took on the directorship of the Chester City Band and continued private music lessons for area students. He and Ruth were able to spend more time, working on and enjoying their summer log home in the Pocono Mountains.

I caught up with him again in 1985, when after a 21-year absence, I returned to Swarthmore after a transfer to Philadelphia. Once again, he became a cherished part of my life. We were both active in the Swarthmore Lions Club and played in the town band together on Memorial Day, Fourth of July and at the Halloween parade at the college field house. We often lingered after the performances and Lions’ meetings to reminisce about times past. I grew to love this gentle man, who had given so much to his students and brought so much joy to the town of Swarthmore. Even now, I cannot hold back the tears as I am writing this. I delivered the eulogy at his funeral in 1999, after he had passed away suddenly at home. He was 87 and had performed with his dance band barely a month before. He was later memorialized by his students in stone, beside the town hall in the center of town. Every time I fire up a CD, especially the ones featuring brass bands, I will see him in my mind’s eye and remember what he accomplished. For all I know, he may now be leading St. Peter’s heavenly band through the Elysian Fields, wearing his wonderful director’s uniform, and playing his favorite marches. They will grow to love him there as well.