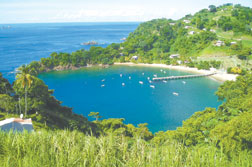 It was a cold and dreary New Jersey February in 1985, when I flew down to sunny Trinidad and Tobago to visit my customer and personal friend Everard Scott. He met me as usual at the Port-of-Spain airport and drove me to the upside down Hilton where I would spend the week. The hotel is called upside down because it sits atop a hill and all the floors are built along the edge of a cliff below the lobby level. Floor numbers start from 1 and go to minus 12 as the elevator takes you down to your room.

I have always loved Trinidad and Tobago and the lovely people who call this largest island in the Caribbean their home. They are hard working, fun loving people and my dear friend Everard was no exception. His first words upon seeing me walking out of the gate would always be “Where have you been man, we thought you were dead!” or “You have gotten uglier since the last time I saw you.” Those were considered to be words of endearment in Trinidad. Or that is what I was told and found it convenient to believe.

My trip on that February was supposed to be no different from all the previous ones; visit customers, solve problems, get orders, attend a few parties at Everard and his lovely wife Betty’s beautiful “A-Frame” home and return to New Jersey. This trip did not turn out to be that way. It was a trip which changed the course of the Ayasun family’s lives forever.

The night before I left Trinidad to come home, I was invited to a party at Everard’s home. As usual, there were a lot of people there as my friend always invited half the island to his home for these Friday night parties. A lot of bottles of Old Oak and Royal Oak Rum were consumed before we were served one of the best “curried goat meat and Roti” dinners I have ever tasted in TT as the locals prefer to call their country.

Drinking continued after dinner and by midnight we were all feeling very good, moving around on our wobbly legs and blabbering in the beautiful tropical garden at the back of the house, enjoying the warm Caribbean night. Just before I was sent back to my hotel with a local driver, Everard approached me and indicated that he wanted to talk to me in private. We walked away from the house when he suddenly stopped and asked me if I would like to buy a lot which he owned in Marco Island since he needed the funds to send to his son who was living in Miami at the time. Feeling real good and not really thinking very clearly, I said “sure Everard, what are friends for?”

I had never heard of Marco Island before and assumed it was one of those small islands off the coast of Trinidad. Having told me the price he wanted, which was amazingly low; I pulled out a check-book (Citibank Equity Line) and wrote him a check on the spot. We shook hands and I was sent off back to the hotel, not knowing if I was feeling great or 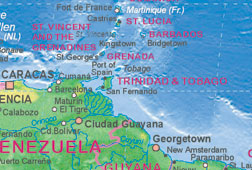 feeling nothing at all. Waking up the next morning was a tough act; the room was bobbing up and down like a sailboat in a Caribbean storm and the hundreds of drums in my head were beating as hard as they could. However, the worst feeling was when I remembered buying a lot on Marco Island from Everard. How was I to explain this to my dear wife who was stuck back at home in New Jersey, snowed in and dealing with our two young children! One thing was for sure, owning a lot on an island in the Caribbean would not have been one of her priorities. I had dreadful visions of trying to explain to her what a wonderful place this island was; how the weather was beautiful all year round and many more rosy pictures of heaven on earth even thought I had not even seen it for myself.

On the flight back, I decided not to say anything to her after all. My mind was still fuzzy from the evening of the party. I tried to convince myself that the entire thing could have been just a ruse by Everard; or worse yet a drunken dream or maybe just my imagination enhanced by the numerous glasses of rum I consumed. I got back home and forgot (or tried hard to forget) about the whole thing and went on about my business selling, traveling and staying out of trouble.

Six months later I received a call from Everard who was in Miami with his son and was asking me to come down so we could sign the papers for my purchase of the Marco Island lot. Reality hit me in the face like a rogue wave on a Pacific island beach. I flew down with a heavy heart to meet Everard at the Miami airport. He had rented a car and we started driving. Having thought we were going to his home, I was surprised to notice we were driving westbound on the old Alligator Alley; a narrow two lane road with nothing but swamp land on both sides. Seeing my rather puzzled look, Everard told me we were on our way to Marco Island to meet with a local attorney who had all the necessary documents for us to sign. I thought “the good news is Marco Island is in the USA; the bad news is it is in a swamp!”

My anxiety ended once we went over the bridge and entered the island from North Collier Boulevard. It was a beautiful place! As we drove down towards the Marriott, I noticed all the palm trees, single story homes with beautiful little front lawns full of colorful flowers and just one single solitary traffic light all the way to the hotel. Needless to say, I was in love. That afternoon we met with Attorney Glenn Tucker who represented both of us in the transaction and I became the owner of a lot on Marco Island, Florida, USA.

Now, the major problem was how to tell my wife?

I booked a room for December 26 – January 4, at the Marriott for the family, toured the island with Everard and we returned to Miami the next day, and 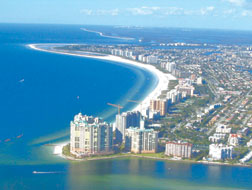 I flew back to a very hot and humid New Jersey. I told my wife and the kids that we were going to Florida in December for our winter vacation. Thinking we would be going to Disneyworld, everyone was excited but extremely and vocally disappointed when told we were going to a small island in the Gulf of Mexico called Marco! “Boring”, “do we have to?” and other similar cheeky remarks was the reaction I got.

We flew to Orlando on December 26, 1985 and drove to Marco Island using Tamiami Trail (41). The drive from 41 to Marco on 951 which was a narrow two lane road with vastly overgrown mangroves on both sides was not the best way to introduce Marco to my family. We quickly checked into the Marriott as the rain started coming down hard and the weather cooled down to low 60’s. Needless to say, everyone was unhappy as we were stuck at the hotel with nothing to do. It rained non-stop until January 1, 1986.

On the first day of the New Year, I put everyone in the car and drove down to “my lot” on the island. There were only two homes on the street and many, many empty lots. I stopped in front of “my lot” and asked my wife what she thought about it. “What should I think?” she said; it is a lot like any other on the island. I said “but it is our lot! I purchased it!” maybe I should spare the readers the details of the conversation that took place at that point but suffice to say, she did not throw me in the canal.

Around the corner from our street was San Marco Road and there was a model home built by Sunbrella Homes. We stopped to look at the model. As my wife toured the house I started talking to the real estate lady who had an English accent. She turned out to be great salesperson and the daughter of the President of the world famous soccer team, Manchester United. My wife, having finished the tour of the house came back and asked me “can we do our business from here?”

The rest is history. We moved to the island on August 1, 1986; rented a house on Collier Boulevard, bought a couple of office units, moved our business down over a period of a year and our Sunbrella home was delivered to us in February of 1987.

My dear friend Everard passed away last February and I truly miss him very much. His dear wife Betty preceded him in death by three years. He loved Marco Island and who knows maybe regretted the fact that he sold me the “lot.” I will never know. I never asked him. I know Marco Island has been very good for my family, our business, our growth as citizens, our health and well being.

We love Marco Island and will most probably live the rest of our lives here. There is no place like Marco Island. Having traveled around the world for my business for 30 years, I can assure you, I know!