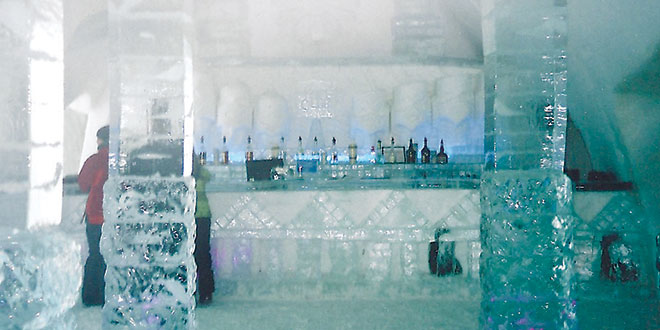 Even the spirits behind the counter can’t warm the bar made of ice. SUBMITTED PHOTOS

Skip Merriam left winter behind when he and his wife moved to Marco Island from New England.

But the upstate New York native’s love of wintertime outdoor activities was too firmly ingrained to be discarded like a no longer needed goose down coat.

That is why Merriam has travelled to the frozen North each year for the last 15 years, for group snowmobile trips lasting several days and covering hundreds of miles.

His most recent trip, from February 5 through February 11, was to the wilds of northern Quebec, where he and nine other men rode the motorized sleds a total of 1,165 miles through the forests and mountains of the province’s Gaspésie (pronounced “Gas-pay”) Peninsula, to the Atlantic Ocean.

“People down here think I’m nuts going into the cold and being outside, but it’s invigorating and at this point, it’s a rite of passage. I can still do it at 71 years of age,” said Merriam. 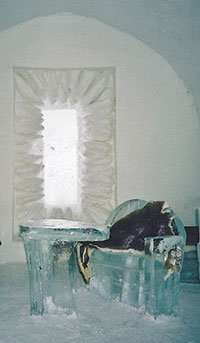 friends, all around his age and all of them upstate New Yorkers with summer homes around the same lake in the Empire State’s Adirondack Mountains. Merriam said that over the last few years his friends have been unable to join him on the trips because of infirmities and other reasons.

So for this year’s trip, he joined a group of other expert snowmobilers he’d met along the way. He was the oldest rider by 18 years, “but it didn’t matter,” Merriam said with a laugh.

“I always enjoy them,” he said of the trips. “We all have our stories. It’s like fisherman. They’re always telling stories. And it’s always an adventure. It’s never just a clean run. Somebody breaks down, somebody goes off the trail, snow conditions change, it rains, it hails, it sleets – it does all of these things, all in one day sometimes. So there’s always an adventure portion. But at the end of the day, we sit there with a toddy at the end of the run and say, ‘Hey, we’re good and we

Merriam said he loves the camaraderie fostered as they travel at speeds up to 85 miles per hour, covering about 200 miles per day, over 8 to 10 hours.

“Also, the access to the views and the beauty of winter are available to you,” he added. “I think that’s the main thing (he enjoys), along with the camaraderie.”

Companies offer snowmobile excursion packages for all skill levels throughout the Northeast and the northern tier of the West, Ontario and Quebec, said Merriam. Along with his friends, he has trekked by snowmobile in New York, New Hampshire, Vermont, Maine, and Yellowstone and Grand Teton national parks, as well as Ontario and Quebec.

But it is Canada’s French-speaking province that most appeals to Merriam.

“I like Quebec because the trail system is wonderful,” he said. “They groom them for you and you can go thousands of miles. Quebec is large. It’s bigger than the whole Northeast United States. It’s huge. They get people from all over the world because it’s famous for snowmobiling.” 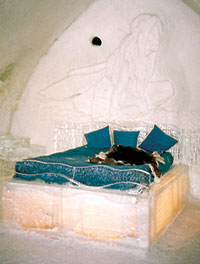 are indeed frigid. Merriam said the warmest morning on this year’s trip was about 15-below zero and daily highs were usually in the range of six to seven degrees Fahrenheit.

Having the right gear, such as a snowmobile with hand warmers, a heated face shield and, of course, long underwear, a snowmobiling suit and rugged, waterproof, thermal boots, is all important, he said.

The Quebec trips began when Merriam found out that one of his summer home neighbors, Gary Pruitt, is owner and chief guide of “Bon Voyage Snow Adventures” in Quebec. He said Pruitt handles all the arrangements, so all participants have to do is catch a flight to the rendezvous point of Quebec City and be present at the appointed place and time.

Merriam’s snowmobile is kept at the ready, packed away in a trailer along with his snowmobiling gear, at his summer home. He has it shipped to Quebec City for the trips. 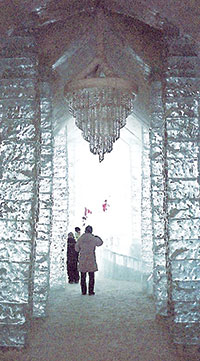 [/caption] />This year’s route saw the riders traveling about 150 miles north of Quebec City and climbing 3,500 feet in elevation through sparsely populated territory where humans are far outnumbered by moose, deer, fox, cougars and other wildlife.

“From the forest scene, to the mountains and back down to the coast, you’re just in awe of the scenery,” said Merriam. “We stopped probably five or six times in a given morning or afternoon just to take in the spectacular scenes we were seeing.”

“The moose are the most interesting because they’re absolutely immense,” he added. “It’s interesting. You’re going through the woods and there are no leaves on the trees and a moose will go off the trail and in what seems like a few seconds, you lose him. He just blends in. It’s incredible.”

Merriam traced their route on a map which shows a Quebec laced with snowmobile trails, “All with interstate signs,” he said. “It’s amazing. It’s a very sophisticated system.”

There are bars, eateries and “relays,” places you can stop and gas-up, near the trails, as well as 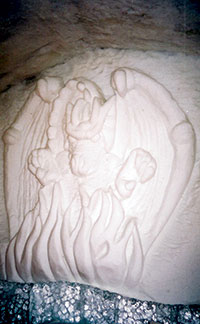 three to five-star resorts that cater to hikers, fisherman and outdoorsmen in warm weather, and skiers and snowmobilers in the winter.

Merriam and his fellow travelers stay in resorts during their trips. “We prefer our creature comforts,” he explained.

Side trips are also part of the itinerary. This year, Merriam’s group toured the Hôtel de Glace, which is one of two hotels in the world constructed of ice. Located near Quebec City, the Hôtel de Glace is a place where everything is made from frozen H2O – from the beds, to the bar to the chandelier.

Merriam said a destination has not been selected for next year’s trip. He said he and his friends will talk over the summer and go from there.

He has tried to convince a few of his Marco friends to share the snowmobile trip experience. “But so far, I haven’t been successful,” he said. “They all think I’m nuts. But I have one or two on the hook who may join me next year. I think that if they try it, they’ll like it.”