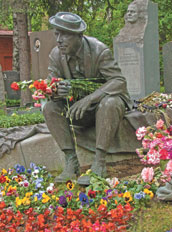 Muscovites love to place flowers at the statue of beloved clown, Yuri Nikulin, in Novodevichy Cemetery.

Moscow is a busy city where East meets West and hustle and bustle surround a scene that seems to have come from a fairy tale. Most of the wealth in Russia is concentrated in Moscow. The metro with its richly decorated stations is fast moving and crowded. Traffic is a problem. Grocery stores stay open 24 hours because, as a local guide explained, “we are used to shopping in the middle of the night because we work from 9 to 5 and then sit in traffic.”

The walled 68 acre Kremlin fortress combines religious structures with the seat of political power and the fantastic state treasury. The wall which dates to the 1400’s has 20 towers, through one of which tourists purchase tickets and enter. The Cathedral Square in the Kremlin is home to four imposing domed churches. All of them are worth visiting; the frescoes and iconostasis in the Annunciation Church should not be missed. The Armoury Palace Museum displays an impressive collection of treasures of the Tsars including works of goldsmiths, silversmiths, Fabergé eggs, and royal regalia such as thrones, crowns, carriages, and coronation gowns. Before we traveled to Russia, we watched a two part documentary on the history of the Tsars. That made our visit to this collection much more meaningful. The Diamond Fund displaying the imperial jewels requires an additional ticket.

First inhabited in the second century BC, the Kremlin overlooks the Moskva River. Napoleon tried to blow it up after his occupation; fortunately rain limited the damage. Once the property of the Tsars, the golden double eagles, the royal symbol, atop the towers were replaced with stars by Stalin. 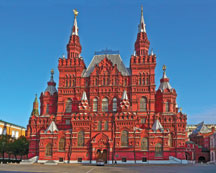 The State Historical Museum on Red Square looks like something out of a Russian fairy tale. PHOTOS BY VICKIE KELBER/COASTAL BREEZE NEWS

The official residence of the president of the Russian Federation occupies one of the four palaces within this citadel. The Arsenal is surrounded by 800 canons, some of them taken from Napoleon. The Kremlin is not open to visitors on Thursdays.

Red Square, perhaps the most well known view of Moscow, is adjacent to the Kremlin. Here is the multicolored, fantastical 450 year old St. Basil’s Cathedral, Lenin’s mausoleum, the historical museum whose design seems out of the pages of a Russian fairy tale, and the GUM (“goom”) department store. Although called a department store, GUM is actually more of a mall within its medieval style facade. Its three stories encompass long passages, beautifully decorated and adorned with balconies, bridges, and sky lights. A visit to Red Square at night is magical, particularly with GUM lit up like a gingerbread house.

Near Red Square is the famed Bolshoi Theater and the infamous former KGB building known as the Lubyanka. The Bolshoi has been undergoing a six year restoration, its main stage reopened last month. Two metro stops away is the Cathedral of Christ the Savior. The original cathedral was destroyed by Stalin in 1931; he had plans to build a Palace of the Soviets in its place. The land, however, was determined to be too wet to support such a structure and the cathedral was rebuilt at a cost of many millions of dollars. Its location is very peaceful; a good place to get away from the crowds. There is a foot bridge from the cathedral over the Moskva River with a splendid view of the Kremlin and St. Basil’s.

The Novodevichy Convent and adjacent cemetery is 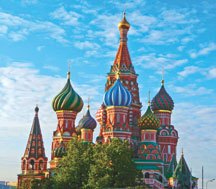 St. Basil’s Cathedral on Red Square is one of the most photographed churches in the world.

another picturesque and peaceful place to visit, although it is a favorite of tour groups. The cemetery is the final resting place of many from Russia’s history including Khruschev, Yeltsin, Raisa Gorbachev, Chekhov, Gogol, Prokofiev, Shostakovich, Rostropovich, and Stanislavski. Many tombstones have unique engravings or statues. The one for the well loved circus character, Yuri Nikulin is a favorite of visitors.

The major museums in Moscow are the Tretyakov Gallery with its collection of Russian Art and the Pushkin Museum of Fine Arts. When we visited, the Pushkin had a special collection of Dior gowns and the paintings borrowed from museums all over the world that had inspired the creations. Both museums are closed on Mondays.

Sergeev Posad Monastery, founded in the 14th century and the seat of the Russian Orthodox church until closed by the Bolsheviks in 1920, is about two hours outside of Moscow, reachable by train or organized tour. A complex of churches and chapels, its centerpiece is the gold and blue with gold star domed Cathedral of the Assumption. Throughout the monastery are great frescoes and icons, as well as the church’s treasury.

The monastery is still active as a religious education center.

Many of the museums and churches do not allow photos. At others, where photos are permitted, there is an extra charge. At all museums, coats and backpacks must be checked. In active churches, it is customary to dress appropriately and for women to wear a head covering. I carried a sheer scarf rolled up in a small zip lock bag for church visits.

While souvenir stalls line the area around Red Square, the Old Arbat is a pedestrian street of shops,

The glass skyscrapers of modern Moscow.

stalls, cafes, and street performers. For a wide selection of Russian souvenirs and the best prices, head out to Izmailovsky Vernisaszh on the grounds of a former Romanov Estate. It is best to visit on the weekends; don’t forget to bargain and remember the word, “skit-ka”, or discount. Adjacent to it is a Disneyesque entertainment complex called “Kremlin in Izmailova” which houses such attractions as vodka, toy, and costume museums as well as cafes and restaurants. Some of the former Romanov buildings, including a cathedral, have been preserved in the nearby Izmailovsky Park.

For a view of old Russia, along with a taste of the new, stop at Yeliseev’s food emporium near Pushkin Square on Tverskaya, Moscow’s “Fifth Avenue”. Housed in a former mansion, marble counters, paneled walls, and ornate chandeliers surround a wonderful selection of gourmet food; interesting edible souvenirs can be found here.

The drivers in Russia are notorious. Fortunately, at the busier intersections, there are underground passages. Some are just for crossing the street, while others connect with the metro and are a maze of storefronts and tunnels. If no underground passage is available, do as I learned to do in Rome; look for a local, align yourself with him/her, take a deep breath, and walk briskly.