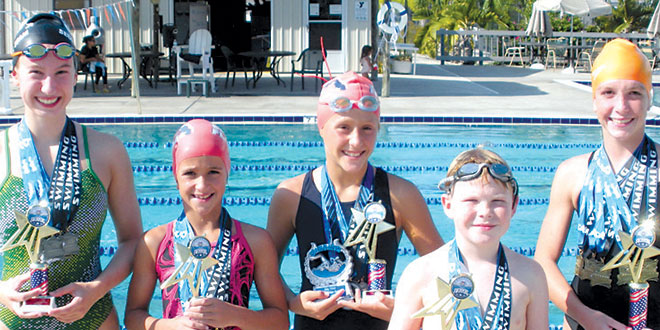 Carol Mortensen is back in her element as an instructor for the Greater Marco Family YMCA aquatics program.

Mortensen, who has taught swimming for 25 years, joins Steven “Bear” Terstegge in providing private lessons at the Y’s Ms. Dottie Weiner Aquatics Center, where she is also handling group lessons.

She is a strong proponent of group lessons for youngsters who are just beginning to learn how to handle themselves in the water.

“It’s what I’ve done for most of the time that I’ve been teaching,” said Mortensen, who joined the Marco Y staff in July. “I believe that in group lessons, you can have children who will learn from the other children. I think it helps to motivate them. There’s a fear factor for children, so if they see another child doing something you’ve asked them to do, it helps to build their confidence, seeing other children trying that skill.”

The northern Virginia native worked as a technology resource teacher for 15 years in that state, as well as in North Carolina. She later spent several years working in hotel management, before moving to Naples in 2013.

A former high school and collegiate swimmer, Mortensen is passionate about the activity as a sport, as form of healthy exercise and as a vital skill that everyone should possess.

Private and group swim lessons are open to young children just learning how to swim, as well as adults looking to improve their skills in the water.

“Miss Carol is fantastic,” said Szczepanski. “Jillian took to her immediately. She’s great with the kids. She really encourages them and pushes them. They love playing with the

(pool) toys and I’ve just been so pleased with the program.”

Szeczepanski began swimming lessons at age 4 at a YMCA in Pennsylvania and she wanted Jillian to also get an early start. “We have a pool at the house, so I wanted to make sure she was going to learn how to swim and be safe at the pool,” she added.

“It’s kind of a community landmark, our YMCA pool,” said Joel Frysinger, the Marco Y’s program coordinator. “Obviously, Miss Dottie was a huge part of that and we’re attempting to carry on her legacy.”

Frysinger said the pool is open to the public and it’s often a hotbed of activity, with lap swimmers as a regular presence during the day and popular fitness classes, like aqua yoga and aqua zumba, also keeping activity level high.

The team’s proficiency in the water was demonstrated with authority at the recent Key West ABC Pentathlon Invitational Swim Meet, where a contingent of five Marco youths came away with a combined 25 medals and five trophies.

“We took five kids and they all came back with medals and trophies,” said Farhat of the September 5 meet, which also included four teams from South Florida and the Florida Keys. “I think that for the number of kids we took, this was the best performance ever because they all achieved at the highest level.”

“It feels good, as a coach, to see them all achieve at the highest level,” Farhat added. “I’m happy for the kids. And they didn’t just win medals and trophies, but they also had their best times, compared to other meets.”