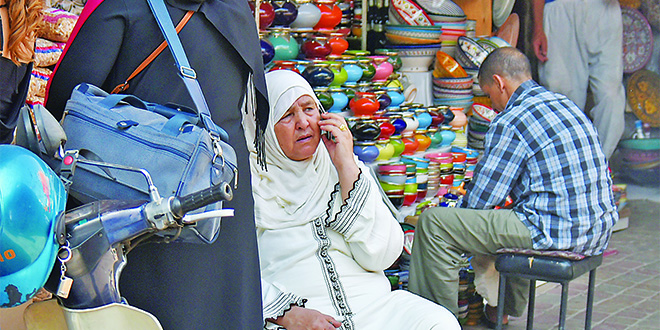 Photos by Ewout Rijk de Vries: Even here many people have cell phones.

Driving up to 7,417 feet on a crumbling dirt road in the Moroccan High Atlas Mountains is not for the faint of heart, but it certainly was another highlight on our driving trip through this fascinating country and the Sahara Desert. (Read part one to the story in the Nov. 25 edition of Coastal Breeze News).

We drove through the massive sheer cliffs of the Todgha Gorge in Southern Morocco reaching almost 1,000 feet in height on both sides of the narrow winding road. From there we continued via numerous kasbahs to the Dades Gorge and up one of the better mountain roads past endless hairpin turns to the top. We would experience a lot more challenging road the next day, where even stopping at the good photo op points was impossible. The rough multi-color rocky landscape is an impressive contrast to the cultured coverage of fig, poplar trees, almonds and vibrant green pampas grass along the valleys below.

We stayed overnight outside the town of Skoura, an alternative to the busy city of Quarzazate that is a top tourist destination for day trips from the city of Marrakesh on the other side of the Atlas Mountains. The Sawadi Riad, situated in the middle of a cultivated oasis, consists of several massive buildings with four feet thick walls reminiscent of the Middle Ages. Sawadi can be reached by driving through two wide, partially dry rivers. Once finally there, it literally is an oasis of green and is self-sufficient for much of its food and vegetables. Around our lovely room we saw more green, plants, trees and fruit than anywhere else on our journey. The food and service were excellent. After fortifying ourselves with two days of rest and the good food and wine, we were ready to face the High Atlas Mountains on our way north.

We took a short road to the UNESCO World Heritage Site of Ait Benhaddou, a group of small kasbahs inside the remnants of a giant fortified village on the side of the pink rock façade above the River Wadi. A former resting place on the old caravan route between Marrakech and the Sahara, it is an impressive site used for numerous Hollywood movies and TV, including “Game of Thrones,” “Gladiator,” “Jewel of the Nile,” and “Marco Polo.” Here we left the last few tourists behind and continued on a dirt road up the Tizi-n-Tichka Pass. Originally built by the French in 1920, this is the highest pass road in Morocco and we topped at 7,417 feet. Aside from the occasional donkey cart and people in colorful and spotlessly clean outfits, there was no traffic as we continued down into valleys and back up the mountain range via seemingly deserted villages and an ever-narrowing dirt road trying to hug the cliffs, but not always succeeding. We seemed lost in the breathtaking scenery and at places were wondering if our crumbling road and tiny bridges would support us, and if we had missed a turn off some way back on this spectacular 100-mile mountain drive. My wife, Jill, woke up a dozing villager in the heat of the afternoon at a small mud clay home in order to negotiate a price for a gorgeous large copper kettle in the front of his modest mud home amongst a collection of well-worn household items he was selling. His wife had to be fetched from another home to participate in the final negotiations taking place in their limited French. However, it was an entertaining and welcome respite from the arduous drive. Eventually, we did breathe a sigh of relief when some 100 feet below us in the distance we saw two large trucks and a bus laboring up the mountain, obviously on the main road to Marrakech, which we would soon join.

We arrived in the city and aimlessly drove around trying to find the proper medina gate closest to our riad. In frustration we picked up a man in his djellaba and white skull cap off the street who guided us through the labyrinth of narrow streets with hardly 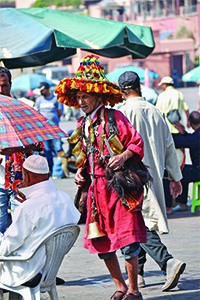 enough space for our small car between walls, shops, people and vehicles, to a busier street with food stands, bicycle repair shops, an outdoor dentist and barber. We had to walk two more alleys, not accessible by car, before arriving at La Porte Rouge.

Hidden behind a massive ornate red door was an oasis of flower, plants and peace with ornately decorated rooms and a lovely rooftop terrace serving good vegetarian dinners. Later we found that the location was actually ideal for a visit to this city of 1,001 nights, and we also discovered a much easier way out of the medina for our departure.

Established in 1062, Marrakech was the center of an empire, controlling the southern region of the country from the thrones in fabulous palaces and cooling palm groves. The architecture of Moorish and Andalusian buildings in the medina changes in color from warm ochre to rust depending on the time of the day. The whole fairytale city is surrounded by the best preserved ramparts in Morocco, and the city boosts an underground irrigation system for the palm groves constructed in 1106. Marrakech lost the glory of the earlier years and is now only the fourth largest city in the country. However, it is the top tourist destination in Morocco and derives most of its income from tourism. Meandering through the kasbah, we still saw only a sprinkling of tourists who ventured into the kasbah on their own and the crowd was overwhelmingly local. More than in previous days, the contrast of the old and the new progressive Morocco was on display here. There was a fully covered woman only showing her eyes and her daughter in a pair of jeans and high heels shopping together and three girls in miniskirts with two friends in traditional djellaba.

We left this photographic paradise and one of the world’s best people watching places I have ever visited to drive to our last destination, the capital, Rabat.

Rabat creates a feeling of space for the visitor with wide boulevards and lots of green space. This is the home of King Mohammed VI, and aside from the Royal Palace, there are many impressive government buildings in the modern part of the city lined along spacious boulevards. It is also the financial center of Morocco. The picturesque Oudaia Kasbah is an old fortress partly enclosed by ramparts from the Alomohad (1100) period, built on a rock formation overlooking the Atlantic Ocean. Across the River Bou Regreg harbor is Rabat’s arch rival city of Sale. We opted to stay at a riad in Sale, as the international airport is located there. Our riad was located in the medina of Sale close to the water, but still five narrow alleyways from the main road. English expat, Jan, married her Moroccan husband, Rachid, and they totally gutted an old merchant home. The actual redecoration was a long process, as they had not realized they inherited an older lady with the home, who was legally allowed to stay till she passed away. Today they offer four suites: The African Suite, the Chetchaouen (or Blue) Suite, the Mango Suite and the Arabian Suite. We opted for the richly decorated blue room that was certainly the most unique accommodation on our fabulous trip in Morocco. After settling in and deciding on our choice for dinner, prepared by Jan, we ventured into the medina. We spent two days of meandering through the medina of Sale, where we never saw one non-Moroccan. The medina of Rabat and the Oudaia we reached with a five-minute rowboat ferry across the river for 25 cents per person.

For our adventurous and off-the-beaten track journey we had taken many roads not frequented by general tourism, did not visit some of the well-known high spots, castles and museums and our accommodations were not the outlandish luxury hotels Morocco is known for. But it allowed us to experience this fascinating country and interact with its wonderful people to an extent we would have never experienced otherwise. As a professional photographer, I was richly awarded with a virtual palette of colorful sights and interesting faces.