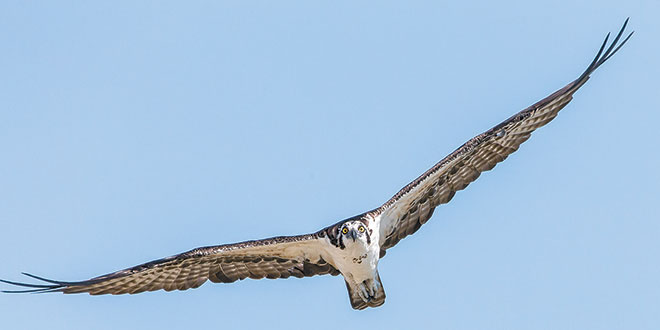 When Andy Morffew wakes up in the morning the first thing that he asks is, “Which way is the wind blowing? Is it a good day to go to Tigertail?”

If you have spent any time at Tigertail Beach, chances are you have seen him there, quietly photographing the birds in their natural habitat, careful not to disturb them.

Andy splits his time between Hampshire, England and Naples, Florida. Although known for his photographs of birds, Andy’s background is in pharmaceuticals and biotechnology. He has a Ph.D. in molecular biology.

much of his newly found time was spent playing golf. His wife Leslie warned him that due to his new golf obsession he was becoming “one note,” and suggested he find another hobby. So Andy picked up photography, something he had dabbled in years before to provide visual aids to his horticulture lectures.

Once Andy started photographing nature regularly, he soon met other birders who told him about Tigertail Beach on Marco Island. When Andy explored the island for the first time he was thrilled by the bald eagle’s nest and the burrowing owls. But when he reached Tigertail Beach and saw the iconic wading birds, he was

hooked. He says it is now his “favorite place in Florida to go birding.”

Tigertail is known in the area for having many birds. But it is not just the amount of birds that makes this area so special- it is the diversity, which Andy’s photos skillfully capture. Bald eagles, least terns, osprey, peregrine falcons, reddish egrets, roseate spoonbills, skimmers, snowy plovers, Wilson’s plovers and more. Often, rare birds can be seen in the mix, making Tigertail especially exciting for birders.

One of the reasons Andy’s photographs are so compelling is that he manages to capture birds mid-flight, with a full clear view of the bird’s face and wings. 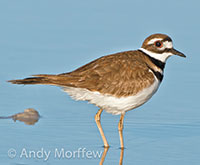 Andy accomplishes this by taking a scientific approach. He explained that birds always “land into the wind,” so he carefully positions himself, and his camera, accordingly. As the subject flies towards Andy to land in its nest, he captures a great frontal photo of the bird. He checks wind directions daily.

Andy’s photographs are not limited geographically to Southwest Florida. His portfolio is filled with photographs of nature from all over the world. Most travellers pick a location to visit and then photograph what they happen to find there. Andy does it the other way around. He picks a photography subject – such as puffins or bald eagles- 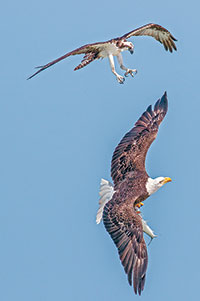 An osprey chases a bald eagle for its catch.

and then travels to the best place in the world where he can photograph them. This method has taken Andy and his wife to Alaska, Costa Rica, Hungary, the Galapagos Islands, and many other locations. The photographs from these adventures are stunning, and have attracted much attention.

Recently, Andy was chosen to “take over” Audubon’s Instagram account with his photographs. His puffin photograph was the first picture in the take over to reach 5,000 likes.

Andy is very different from most other photographers, as he freely shares his images, with limited restrictions. He says that he is happy that people are enjoying them and learning from them. Andy’s images

Andy is always respectful in the way he photographs his subjects. He wants to protect nature, and encourages others to do the same. “I get so much from the natural world, I want to give back.” Andy reminds us to respect the nesting birds on the island, to not chase or disturb them, refrain from using flash photography (both cameras and phones), and maintain a distance.