More Than a Number 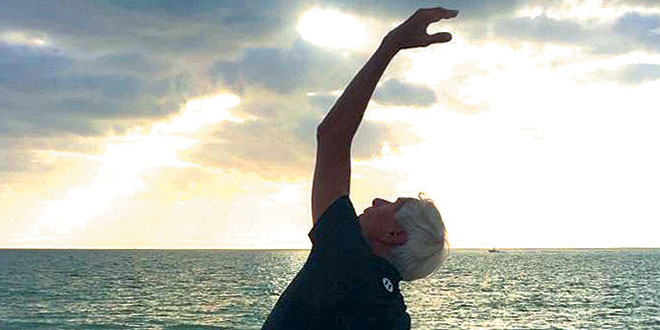 A few years ago I was driving on the Island when I noticed a couple standing on the sidewalk waiting for the traffic light. The man wore the rounded spine of at least eight decades on Earth; his right hand clutched the handle of a cane, punched to the pavement for support. The woman was white-haired, and equally bent, with tubes in her nose that extended to an oxygen tank she pulled wagon-style behind her. But more than their postures and their accessories, I noticed that the fingers of their free hands were entwined.  Hand in hand, hip to hip, they rested at the light. At once I admired them and I cheered them, and I vowed in that moment that I would emulate their mettle.

I often get asked by potential real estate customers, and by people from our hometown in Iowa, questions about the age of the population where we now live. There is an erroneous perception that everyone here is retired and sedentary; that this is the final “pasture” before assisted care.

That’s when I tell my story about the couple standing together at the light. Encumbered by the side effects of a long life, but 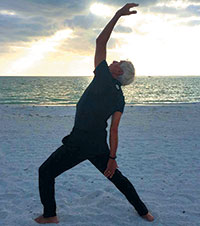 resolute in their desire to be participants rather than spectators.  Yes, the median age here is over 60, but the attitudes of the senior population is anything but torpid.

I see walkers and joggers and cyclists and swimmers. I’ve observed tennis matches, bocce ball tournaments, and pickleball competitions.  There are more golf courses than retirement homes; and there are far more smiles than glowering gazes in the pocket of the world where I now live. And there is no greater example of this zest-for-life attitude than my new friend, John.

John showed up on the beach this spring for his first ever beach yoga class. He introduced himself to me and said he had been practicing yoga for a few years. A discipline he adopted well into his 60s, to compliment his Pilates and cardio classes. That’s right…Pilates, cardio and yoga intermingled in daily doses, as his 70th birthday bobs just ahead on his horizon.

John’s yoga practice is strong, and his focus, fine-tuned but it’s his curiosity that I find most fascinating. He wants to know “why” as much as “how.” He explores beyond the boundaries of a physical posture, in order to embody the experience of yoga as a way of life. 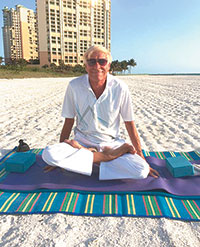 The first night that John showed up for beach yoga, he quoted for me his mantra for life. It is the words of Tao Porchon-Lynch, a master yoga instructor and enthusiast at the age of 97. Tao says, “I do not believe in age. I believe in energy. Do not let age dictate what you can and cannot do.”

Like Tao, I believe in energy and I will not allow my number of years on Earth to mandate how I spend them.

In the words of Billy Joel, I choose to go after what I want, rather than sit on the sidelines of life.

And when the day comes when my body is failing and my breath becomes weak, I hope I will walk softly in the sunshine, holding the hand of my husband.

Laurie Kasperbauer is an active Florida realtor specializing in properties in Naples and Marco Island. Laurie also enjoys the spiritual and physical benefits of yoga practice and instructs both group and private classes.