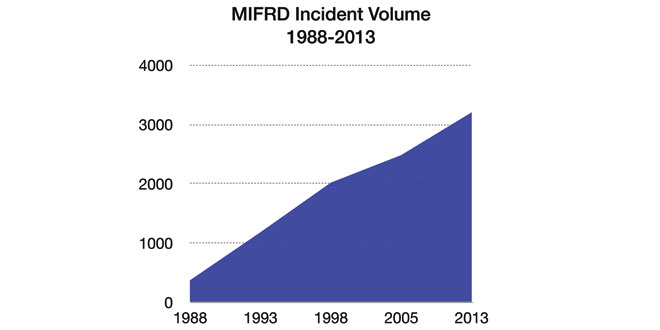 The new year already has been good for the Marco Island Fire Rescue Department. After three years of planning and construction, the department’s new $398,000, 34-foot, state-of-the-art, customized fire-rescue boat finally made it to home port. The new vessel — dubbed Boat 50 — was delivered to the dock behind Station 50 on Elkcam Circle on Jan. 15.

Now, it also appears City Council is going to take another look at Chief Mike Murphy’s request to hire three additional firefighter-EMTs. Both Council Vice Chairman Larry Sacher and Councilor Joe Batte brought up the topic at the first council meeting of 2014, and their sentiments were echoed by Councilor Chuck Keister. In fact, the question has been put on the docket for discussion in February.

“We need to reconsider the additional fire fighters requested by the chief,” said Batte. “I initially voted against it, but this item requires additional discussion the chief needs to provide additional information…We need to put this on a future agenda.”

The reason for the change of heart: Marco Island Fire Rescue responded to 3,202 fire rescue and medical incidents during 2013. This represents a 10.5 percent increase over 2012, a 16.5 percent increase when compared to 2011 and a nearly 60 percent increase since Marco Island became a city 15 years ago. It is the first time in the department’s history it has exceeded 3,000 incidents in one year, and it did all of this with just six more employees than it had when the city incorporated.

This has City Council thinking seriously about the level of service Marco Island residents receive from MIFR. According to department officials, that level of service is falling because of growth on the island and in the surrounding areas serviced by Collier County’s emergency mutual aid agreement. In 2012, 543 of 2899 incidents on Marco Island required off-island assistance, and in some of these cases, island residents waited as long as 29 minutes for help.

“As presented to City Council, the significant response time issues still remain,” explained Deputy Chief Chris Byrne in a separate interview. “We are seeing more concurrent overlapping calls, and because of our lack of resources, we remain dependent upon off-island response of fire and EMS units. These off-island responses have lengthy response times.”

In fact, it is not unusual for the MIFRD to have four or five overlapping calls in a single hour. According to Byrne, there were 37 overlapping calls during the second week of January. “On one day, we had five calls overlap in one hour: two fire incidents, two medical emergencies and one elevator rescue,” he noted.

Byrne added that the impact of the increases are multiplied by three facts: 1) seasonal residents are staying longer; tourism on Marco Island is on the rise; and 3) the number of full-time residents is on the rise.

Byrne and Murphy thought they had the problem solved last August when the city’s Budget Sub-committee approved three additional personnel — one firefighter-EMT per shift — for MIFRD after working with city staff to cut $168,161 out of the budget for FY2014. That was the amount the city would pay to add one person per shift in FY2014.

Why one person per shift? Byrne contended that one additional firefighter per shift will allow the department to staff a squad that will add its new quick response vehicle to the mix 24/7. With the QRV in operation, maintenance and repair costs of the department’s tower truck will decrease because it will have to make less runs. “Having this on-island additional vehicle will greatly improve our service capabilities to our residents and reduce the dependency on off-island Fire Districts,” said Byrne.

The plan was derailed, though, when in September City Council voted 4-3 to scrub the three new personnel from the budget. The funding, however, remained in the budget, which is why City Council is able to entertain the request again.

Batte said he voted against the additional personnel the first time because he felt the in-depth justification for them just was not there. Now, he “wants to hear justifications from (Chief Murphy) and thoughts from my fellow councilors…(W)hen my chief tells me response time to our peoples’ needs is not adequate, I must act, and so I did.”

Other councilors share Batte’s trepidation, but are willing to talk it over. “I was for revisiting this in the spring,” explained Councilor Bob Brown. “While this may only be January, it is close enough to the time frame to relook at what those personnel needs may actually be. It is easy to say that I would support additional personnel, but I need to see how they would be funded.”

There also are councilors who believe the time to act is now. “Our community wants and expects service; unfortunately, you can’t have it on-demand. You have to prepare for it,” said Vice Chair Sacher. “As we are seeing the growth in East Naples on both 41 and 951, as I’ve pointed out at Council, these communities are not increasing their infrastructure, I can’t help but think we might end up with less aid as they grow, and we need to plan for both today as well as the future.”

Councilor Larry Honig is on board as well: “The Fire Rescue Department is falling behind in terms of response times to medical incidents, because the number of incidents is increasing, possibly as a result of the improving economy which causes more travel and vacationing and snowbird visiting….So if we’re serious about wanting to maintain Marco Island’s very high level of service, we need the additional Fire Rescue personnel. The net addition is one person per shift. It’s in the approved FY2014 budget. The equipment has been approved. Let’s quit fooling around with the citizens’ safety and care.”

The discussion could not come sooner in Byrne’s estimation. “We expect and are experiencing continued call volume increases,” he indicated. “The demands for service continue to rise and will become more complex because of construction off-island and growth, which will place a strain on off-island fire and EMS units.”