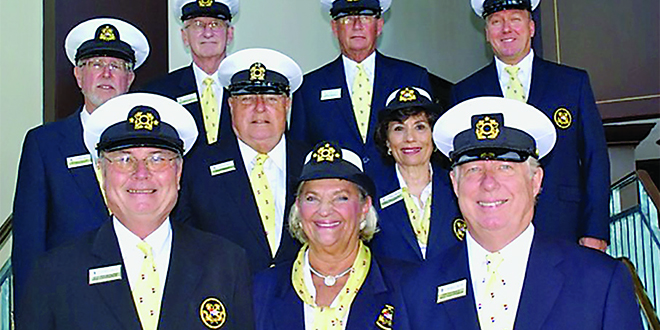 The Marco Island Yacht Club (MIYC) held its 15th annual Commodore’s Ball and Change of Watch ceremony on Saturday, January 21, 2017. The event featured a spectacular gala ball following the celebration of the Change of Watch.

The formal program highlighted the swearing in of Mrs. Lois Dixon of Marco Island as the new commodore, taking over the leadership role at the Club as Bridge Officer and boating events. The outgoing commodore, Randy Harris, also a Marco Island resident, successfully led the bridge through 2016.

Mr. Harris addressed the bridge, board, members and guests welcoming Ms. Dixon as the new commodore. “It is great to see our club growing and preparing for a successful future,” he said.

The ceremonies began with the Change of Watch, during which Mr. Harris’ rectangle commodore’s burgee flag was lowered and Mrs. Dixon’s was raised, followed by the observance of Special Colors, when the American flag was lowered with a booming cannon shot. The Yacht Club then hosted a cocktail hour, with dinner prepared by Executive Chef and Manager Robert Aylwin, and dancing; music was provided by the renowned performance duo, Kelly and Shelly, a husband and wife team who have performed at the Grand Old Opry in Tennessee. They are currently based
in Naples.

More than 100 members and guests attended the black-tie gala.

Mrs. Dixon and her husband, Ed, are avid sailors and currently hold the Multihull Boat of the Year Award in Southwest Florida. They represent MIYC in the race schedule of local regattas hosted by Yacht and Sailing Clubs from Naples to Marco Island. Sailing is a passion for the Dixons, something they enjoy as a couple.

For more information about the Marco Island Yacht Club, visit www.marcoislandyachtclub.net or phone 239-394-0199.