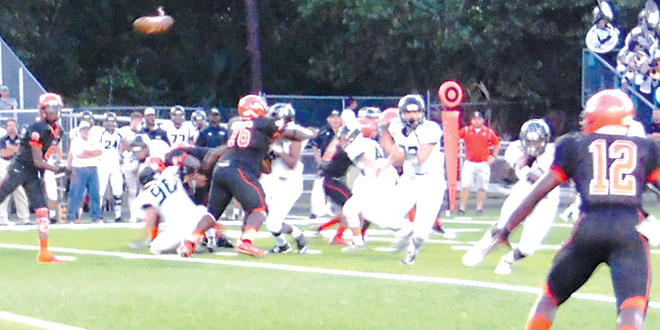 When you walk into the Trojan Stadium for a football game, blazing in red is “We are Lely.”

If the football team can fulfill its potential they will more than fulfill the slogan.

They are not there yet.

There were two good football teams at Lely on Friday night. The Trojans were hosting Gulf Coast.

However, both played like it was a season opener, Gulf Coast winning 24-12 in a game riddled with mistakes.

Gulf Coast had size up front, often mowing down Lely blockers as Gulf Coast seemed to know only how to run right and pass to the right, but effectively. 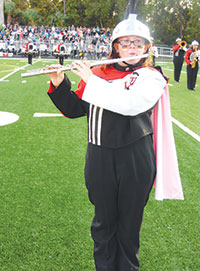 Lely band member Emily Pauli is game ready as she plays her flute during openingceremonies.

Yet Lely’s defense had grit, showing a “bend but don’t break” defense. Unfortunately the offense put the defense into too many of those situations. The defense counted four quarterback sacks, two by Tre’vaughn Young and a blocked field goal attempt by Jean Joseph.

Gulf Coast scored first, then scored again. Even 10 points down, most Lely fans felt sure the Trojans would bounce back, as it seemed the offense was going to break the game open at any moment. But didn’t.

A critical Lely mistake came with just 1:03 left in the first half. Down 10-0, and deep in their own territory, Lely chose to pass. Gulf Coast intercepted. With 18 seconds left, Gulf Coast quarterback Kayden Frost found 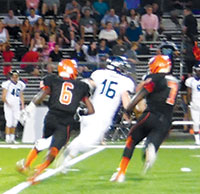 Lely running back Calerb D’Haiti did his part with crunching runs through a stiff Gulf Coast defense. He rushed for 132 yards, which could have been more if it were not for penalties. He put points on the board with a 23-yard run in the fourth quarter.

Sophomore quarterback Jacques Carter added the other score on an 11-yard run. Unfortunately, he stalled a drive with a fumble and a pass interception led to a Gulf Coast score.

Frost threw for 199 yards, including a 66-yard TD play with Brendan Drugan, who also rushed for 121 yards. Carter threw for 66 yards.

In a non-district game, Lely hosts Charlotte High of Punta Gorda at 7 PM on Friday, September 4.