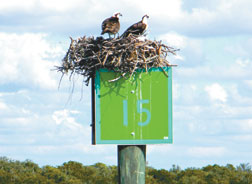 A few days after this photo was taken daymark 15 went missing, complete with nest, eggs and osprey.

I noticed recently that the green 15 daymark, channel mark, northbound from Marco toward Naples is missing. I asked around. No one seems to know what happened to it.

There have not been any severe storms, so it wasn’t weather. Someone in the dark of night may have gotten out of the channel and pushed it over with their boat. Too bad they didn’t report it. They can’t have knocked it over without knowing something had happened.

The worst part about the mark going over is that there was an active osprey nest on the mark. So, we’ve not only lost a daymark, but also that osprey pair has lost this season’s eggs as well as their nesting site.

Assuming the ospreys survived the collision, they will move on, find another nesting site, preferably out of human pathways.

The daymark will be replaced sometime. Till then, be careful in that turn. Taking it too short could ground your boat. Also, remember RRR, red right returning. The green mark 15 would be on your left as you travel toward Naples from Marco Pass.