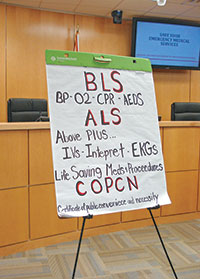 This chart helped explain the various acronyms, the real “players” in Fire/EMSservices. Photo by Maureen Chodaba

On March 10, the Marco Island Property Owners (MIPO) in their dedication to integrity, transparency, accountability, and efficiency in city government, held a public forum to address and educate the public of the present issues regarding emergency medical services for Marco Island.

MIPO Chair Linda Turner welcomed the audience and was followed by opening remarks from physician, Dr. Gerald Swiacki. Dr. Swiacki discussed the importance of rapid response times in emergencies. He stressed that every minute can make a difference in life or death situations.

Marco Island Fire Chief Mike Murphy then took center stage as he presented the complete, very detailed description of our Fire/EMS service as it exists now, and the turn that it could take in the future. He began with a chart that explains the definitions of several acronyms, which are the actual players in this issue. First, there is BLS, or Basic Life Support. This service enables a paramedic to take blood pressure, administer oxygen, CPR, and use an AED (automated external defibrillator). ALS, or Advanced Life Support, enables the paramedic to start IVs, perform EKGs, interpret the results, and administer life saving medications and procedures. EMS is the transport phase of these services. Finally, COPCN is a Certificate of Public Convenience and Necessity. That certificate is what legally enables a municipality to operate EMS services on their own.

And that COPCN could be the key to ensure the quality of EMS services for Marco Island in the future.

The State of Florida designates the counties to regulate EMS services. Collier County and Marco Island have worked together in an inter-local agreement to provide ambulance service located right here on the island. In his opinion, Chief Murphy feels that this arrangement has been excellent. However, he says, “There is a change in the wind.” The inter-local agreement could be in jeopardy due to the proposed consolidation and creation of an independent fire special taxing district in unincorporated Collier County. Marco Island, as an incorporated city, was not part of the vote for the straw ballot question regarding this issue (voting took place on March 15, 2016).

County Manager Leo Ochs has issued a statement, “The long standing BCC direction on this issue continues to be that it will integrate county EMS services into a single unified county fire service which may or may not include municipal fire departments.”

Another event that could cause the dissolution of our inter-local agreement centers on the North Collier Fire District. For years, this district was issued a COPCN by the county. That certificate, which must be reapplied for and renewed each year, was denied this year. This could mean that on March 31, 14 paramedic units may no longer be operating in the North Collier district. The district, in turn, is taking the issue to court based on their belief that inter-local agreements are actually illegal. Should that be proven to be correct, that would indeed be the end of our inter-local agreement. Without that agreement, our Marco Island firefighter/paramedics would be reduced to practicing only BLS services. There could be a chance that Marco Island would eventually be forced to join the independent district as a way to maintain ALS/EMS services.

Chief Murphy is a strong advocate for Marco Island to obtain a COPCN. He maintains that through a solution of “Home Rule” we can have local control of our paramedic service, just as we now have local control of our fire and police services. The City of Marco Island will begin working with consultants Fitch and Associates (www.fitchassoc.com), an independent group, to do a study as to the details of the cost and effectiveness of having our own EMS services. One member of the audience asked why there was not our own straw ballot question, placed on the Marco Island ballot, asking if we would be interested in and support the request for a COPCN. Chief Murphy replied that he does not feel a straw vote should take place without data that could be presented to the public through community outreach and education, such as this public forum. When the Fitch and Associates study is completed, that information will be presented.

A member of the audience asked the question that if we do obtain a COPCN, what would stop the county from denying the renewal of that certificate as they did in North Collier? Chief Murphy replied that he is confident that we will show them high standards of quality in our service to justify our right to maintain a COPCN.

The forum concluded with a question presented to the audience by Marco Island resident, Ray Seward. He asked “Is there anyone here who is dissatisfied with our service as it exists today?” Not a single hand was raised. Chief Murphy said that in his opinion, the best way to preserve this level of service is to obtain a COPCN.

The Chief is asking for your help. He requests that you contact your government officials to state your desire for Marco Island to obtain a COPCN. MIPO made available a letter that they have written with this request, but Chief Murphy stressed that the county will be most impressed by your unique individual request.