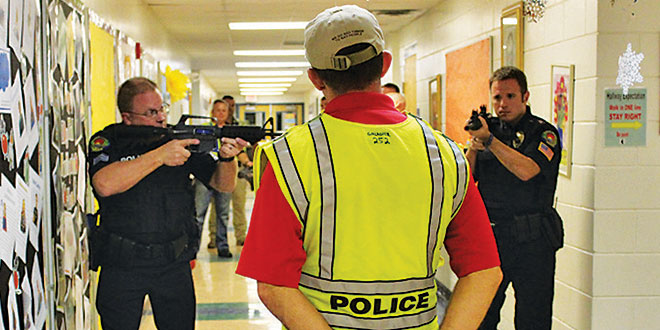 Officer Brad Gallagher of the Naples police department instructing the MIPD officers on how to properly work together toensure a smooth and safe operation.

It was a surreal sight, police officers with guns drawn creeping through the hallways of Tommie Barfield Elementary School. The same school that I spent my elementary years and graduated from in 2004. It still looks pretty much the same, maybe a little bit smaller. It definitely smells like it always did. The large, hunkering police officers did not fit. Nor did the guns.

The officers were being trained on how to respond to an active shooter situation at the school. Something that the Marco Island Police Department (MIPD) feels is very important.

“We have a changing world,” said Sgt. Nick Ojanovac of the MIPD. “We need to make sure that we’re 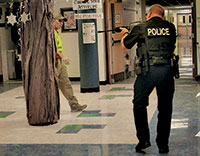 It was a strange sight, officers with gun blazed in the Tommie Barfield Elementary school hallway.

up on our practices and tactics. The tactics actually change continuously now for us. It depends on what the shooters are doing, which changes how we respond.”

This type of training is reality based. The scenarios created were meant to feel as real as possible for the officers so that if this ever were to happen they would know exactly what to do and how to respond.

The night began with the officers gathered around the entrance of the school by the bus loop, disarming themselves. Safety is definitely the name of the game. It was the overarching theme of the whole event. Before the officers entered the school they were searched and searched again to make sure that they had no live weapons on them. Not even a pocketknife. They were then armed with the guns with the paint bullets. A square of duct tape was placed on their boots, signaling that

The officers entering and searching the room in pairs. PHOTOS BY SAMANTHA HUSTED

they were clean and ready to go.

Officer Brad Gallagher of the Naples Police Department ran the training. He started with a walkthrough of the school and as well as the area where the officers would run through the different reality based scenarios. He taught them how to search rooms individually and paired up. He also showed them how to properly look around corners. He would correct the officers until he was satisfied that they had done the procedure right.

The scenarios all began the same. Over the loudspeakers a realistic recording of a fire alarm going off, children screaming and the sounds of general chaos played. Master Police Officer of the Naples Department, Matthew Doyle would then fire two blank rounds. Guns, by the way, are extraordinarily loud. So loud that it’s almost disorienting. Especially when it echoes in the hallways of an empty school.

Then the officer, or officers, would make their

Sgt. Mark Haueter of MIPD acting as a victim during one of the scenarios.

way down the hallway where they would encounter a downed civilian or even a bomb. They would then turn the corner and be met with the shooter, played by Bill Miller, Reserve Officer Badge #68 with the Naples police, who would fire at them.

In one scenario Sgt. Mark Haueter of MIPD acted as the active shooter taking Bill Miller hostage. In another situation Bill Miller acted as a victim and ran towards the officers screaming, “Don’t shoot! Don’t shoot!” In each scenario the officers had to respond properly as if it were the real deal.

The training teeters on the edge of comforting and alarming. It’s alarming that we live in a world where school shootings are a part our reality, but it’s nice to know that our local officers are taking serious steps to combat that. They now know exactly what to do and how to respond should one ever happen and that’s definitely something.