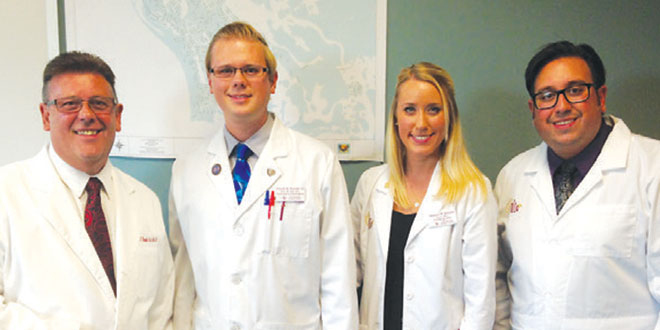 On November 11, members of the Life Hearing Health Clinic stopped by the Marco Island Police Department (MIPD) to fit officers with custom made earpieces.

The clinic has provided custom earpieces for police and firefighters throughout Collier County, completely free of charge. Custom earpieces generally run anywhere from $75 to $200. Needless to say, they aren’t usually in the budget for officers. Instead officers are given the one-size-fits-all models, which can lead to discomfort, as well as communication issues.

Donald Kleindl II and his team wanted to give back to the community. They wanted to do something to help the officers that work hard to protect us, and to 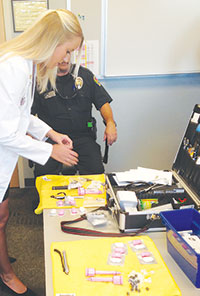 The same material used for dental molds was used for the officers’ ear molds.

make their lives on the job a little easier. “We were trying to think, how can we give back?” said Kleindl II. That’s when they had the idea to provide the customized earpieces. Each year they visit a different station and fit officers with earpieces that are not only comfortable, but facilitate better communication. If officers can hear each other better then they can do their job better, keeping us safe.

The process moved in an assembly line fashion. Donald Kleindl II was the first stop. He used a little machine attached to a monitor in order to look deep into the officers’ ears, making sure that everything was healthy. Then the officers were sent down the line to get fitted for their earpiece. Pink goo was squirted into their ears, molding to each persons’ unique shape. They were instructed to sit for about five minutes as it dried. The now-hard goo was extracted and the officers were free to go. All in all the process took about 25 minutes.