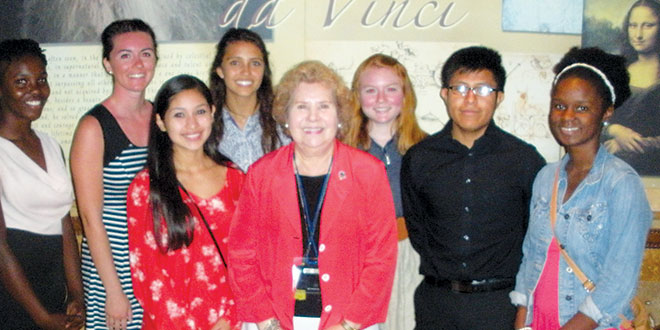 Lynne Minozzi has been involved in volunteering in the community in some form or fashion since she and her late husband Mike moved to Marco Island in 1993.

A sampling of her community service on the island, includes heavy involvement in activities at San Marco Catholic Church, volunteering at the Greater Marco Family YMCA and the Marco Island Seafood and Music Festival, and serving as a caseworker for the St. Vincent DePaul Society and as treasurer for Pro-Life San Marco.

She added a new executive post to her resume recently, that of president of the Noontime Rotary Club of Marco Island for the next year.

“It’s Lynn “Volunteer” Minozzi – that’s who I am,” she said last week after leading her first meeting as president. “I’ve volunteered most of my life, even when I was working in New York. “Now, I’m just doing the same thing.”

Minozzi was preceded in the post by Bruce Graev, who handed over the ceremonial gavel at the meeting, held at DaVinci’s of Marco. Her late husband, Mike, who passed away in 2010, was also a Noontime Rotary president, as well as a former member of Marco Island City Council. 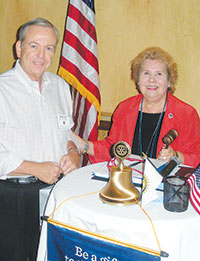 Lynne Minozzi, celebrates leading her first meeting as the incoming president of the Noontime Rotary Club of Marco Island after receiving the ceremonial gavel from outgoing president Bruce Graev at a recent meeting.

selecting her for the post. “She also promised to make every effort to continue club’s success, as have past presidents, “who’ve done such a great job, especially Mike Minozzi,” which was greeted with applause by the members and guests.

In his remarks, Noontime Rotary member Al Diaz told the luncheon attendees that, “My good friend Mike Minozzi would be very proud.”

Lynne Minozzi said her husband was a long-time Rotarian and a past club president in Eastchester, a suburb of New York City, before they became full-time Marcoites.

“I remember sitting at a luncheon and thinking, ‘These people are so great, they’re so giving and I’m so happy to be part of it, even though I’m a guest,’ “ she said. “Well, many year later, here I am – president.”

Lynne Minozzi the Noontime Rotary’s strength lies not in its size, but in the dedication of its members.

She also praised the organization.

“It’s very simple, I love Rotary,” said Lynne Minozzi. “I’m so happy and honored to be president this year. I know I’ll be getting lots of support and I have a wonderful board, and I’m looking forward to working and supporting all the charities that we’ve supported in the past.”