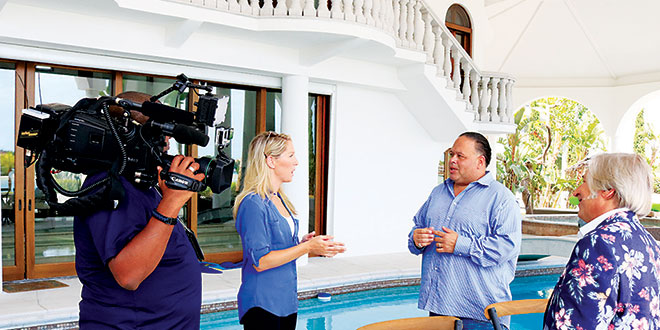 “Everybody wants to be in it,” said Chuck Ardezzone, co-founder, of the 30-minute reality show’s producer, Naples-based In Trouble Zone Productions. “We’ve got Marco, we’ve got Cape Coral. We’ve got all kinds of places.”

As the title, “Million Dollar Listings: Billionaire’s Coast,” makes clear, the show focuses on the luxury real estate markets in Collier and Lee counties, and the professional and personal lives of the realtors who deal in multi-million dollar homes.

“It’s the high end homes and the realtors that sell them,” said Ardezzone. “We look at how they get a listing, how they stage the home, what realtors do when they’re not selling, what’s their family life like. “It’s a reality show, but it’s also a huge, huge branding opportunity for these realtors and it’s great exposure for the whole market.”

Ardezzone’s partner, Frank Monti compared the show to one that was once a cable

“It’s the 21st Century version of the old Real Estate Network,” said Monti. “It’s the most unique marketing tool they allow us to offer.”

“Million Dollar Listings: Billionaire’s Coast,” shot the first of four episodes on the island in late May at a 9,874 square-foot, Alameda Court, waterfront home with a Spanish-style exterior, a guest house, a dock with dual boat lifts, six bedrooms and seven bathrooms. The home, which sold for $2.8 million on May 15, is currently being renovated for resale.

John Krol, a realtor-broker for Realty World Top Producers, on Marco, is handling the listing.

Purcell, a realtor-broker for Century 21 First Southern Trust on Marco stopped by the Alameda Court home while shooting was underway to learn more about the show.

“Some of these reality TV and internet series can be catchy, it’s just using different media sources to market a $1 million-plus property here of Marco Island,” said Purcell.

ITZ Productions produces reality TV shows for major networks such as A&E, CMT, Discovery Channel, TLC, TruTV, OWN and more. The company’s most recent production was “Paradise Coast Wives,” which examines the lives of the area’s wealthy women.

Ardezzone said it’s common for people to approach him and Monti with ideas for reality shows, including the realtors who pitched the industry as an ideal candidate.

“As a producer, my main job is identifying great characters,” said Ardezzone. “We are in a real estate development area and we have great characters, and people want to see how these wealthy people 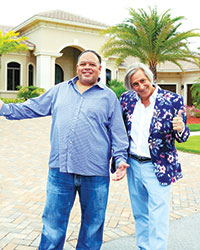 Frank Monti, COO and executive producer with In Trouble Zone Productions, left, and Naples realtor Cliff Donenfeld, a co-producer of “Million Dollar Listings: Billionaire’s Coast” at the Marco home where an episode was being filmed.

who come to Naples live. It’s a peek into their world.”

The show’s title was “Million Dollar Listings Naples, Billionaire’s Coast” when filming began in March, with the focus on high-end properties in and around Marco’s larger neighbor to the north. The level of interest from realtors lead to an updated title as the scope expanded to include Marco and in the future, Punta Gorda and other communities, said Ardezzone.

The show’s debut episode was filmed in a new $22.9 million, custom-built home in the Port Royal section of Naples. The lowest price home featured thus far was priced at about $1.5 million, said Ardezzone.

Ardezzone said realtors and also homeowners who aren’t happy with the exposure their home is getting on the market have been contacting ITZ about being featured on the show. Those contacts

are coming from as far away as Boca Raton, Ft. Lauderdale and Bradenton.

“The home has to have something different, but it’s mostly about the realtor and the homeowner,” Monti. “We’re turning them into walking billboards so they have to be fun in their own way. You want something that shows well on camera and has a good feel when the realtor or homeowner is walking through. It’s just a good time and you’re like, ‘Wow, I would like to live in something like that.’ ”

Ardezzone said it takes about one month to film, edit and create an episode and that plans call for shooting 10 episodes, with an eye toward garnering the interest of a national television network. Episodes are airing locally on WINK-TV and Fox 4, but without a regular time slot. That will change on July 5, when they be seen at 9 a.m., on Sundays on CW 6 – WXCW.

Episodes can also be viewed on YouTube at www.youtube.com/channel/UCcsJxDVlI8h94PYKfxLmdIQ/feed