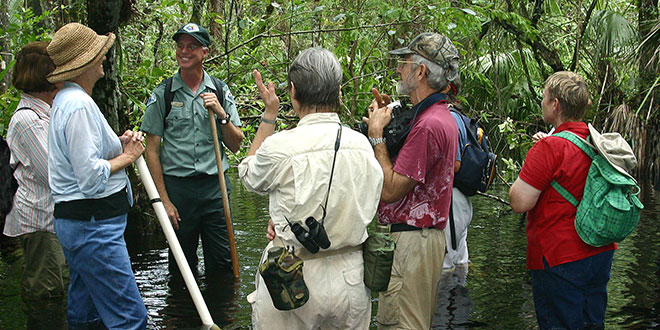 One of the rarest epiphytic orchids in the Fakahatchee Strand, the Cowhorn or Cigar orchid, is listed on Florida’s Endangered Plant Index. Efforts have been underway for several years to restore this once-flourishing orchid. The long road from orchid seed to successful seedling will be told by Mike Owen, Fakahatchee State Park biologist, at the Gulf Coast Orchid Alliance’s “Third Thursday Orchid Event” on December 18, 2014 at the Vanderbilt Presbyterian Church at 1225 Piper Blvd., Naples, FL 34110 from 6:30–8:30 pm. Orchid lovers are invited (no charge).

Mike Owen has been the biologist for the Fakahatchee Strand since 1994. His primary focus is collecting data relating to the survival, distribution and reproductive habits of the native and exotic animals, as well as plants like ferns, orchids, peperomia and bromeliads (some of which are extremely rare). With help from park staff and other supporters, 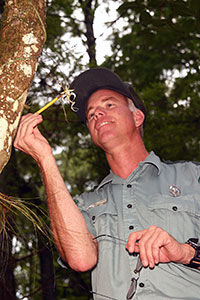 he documents and studies fluctuations of water levels, fire and weather events, the effects of exotic species invasions, topography, and the importance of maintaining the biological diversity of this area, which includes the greater Everglades and Big Cypress ecosystems. His work greatly contributes to the scientific knowledge of the area, most of which has never before been documented. He says that the overall goal of conservation is the protection of biodiversity and the ability to send as much of this diversity in all of its forms to the future. Mike also gives slide presentations and leads swamp walks, introducing visitors to the many wonders of the region, which helps promote understanding and appreciation for the seasonally changing dynamics of this ecosystem.

Another highlight of the evening will be the Monthly Exhibition Judging, where Alliance members participate as exhibitors as well as judges, winning accolades for beautifully grown plants. An orchid raffle will be held, and some plants will be available for sale.