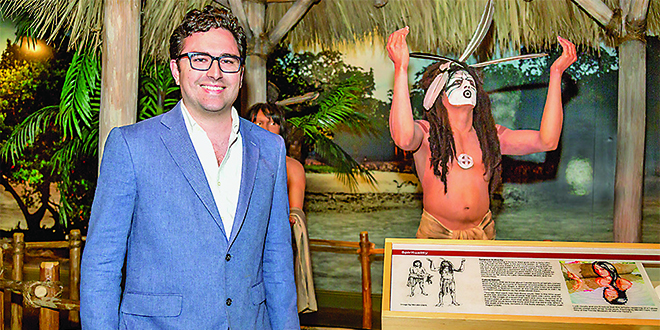 When Austin Bell received a phone call from a Washington, DC area code on December 6, 2016, he thought about ignoring it. He was literally in the middle of installing the Marco Island Historical Museum’s new Pioneer Era exhibit and wasn’t expecting any calls, but something told him to answer. “I thought it was probably another robo-caller,” says Bell, Curator of Collections for the Marco Island Historical Society (MIHS), “but I just had a feeling that it was important.” Instead of hearing a pre-recorded sales pitch, Bell was politely greeted by the office of United States Representative Curt Clawson, who offered early congratulations to the MIHS for being named the recipient of a Preservation Assistance Grant for Smaller Institutions from the National Endowment for the Humanities (NEH).

The NEH grant award of $6,000 will go toward “the rehabilitation of archaeological materials from Marco Island, Florida.” The funds will be used to purchase necessary supplies, such as acid-free boxes, archival bags, and artifact labeling materials. Bell, who authored the grant request in May 2016 and is the Project Director, is basing his approach on methods learned while at the Florida Museum of Natural History, where he participated in a similar (albeit larger-scale) NEH-funded project for several years.

Marco Island is home to some of the most well-known archaeological sites in Florida. For more than 120 years, artifacts from Marco Island have been collected by revered institutions such as the Smithsonian and the British Museum. Most of the materials originated from early Native American people such as the Calusa, Glades, and Archaic Indians in Southwest Florida. The MIHS now possesses a significant collection of its own, largely a consequence of required modern archaeological surveys.

The MIHS collection holds potential as a resource for public access and academic research, especially in comparative studies with materials at other museums. However, until now, most materials have been housed in deteriorating non-archival field bags and boxes, with any associated context in danger of being lost. This grant ensures a comprehensive rehabilitation of these important artifact so that they are preserved in perpetuity to benefit the public.

With the help of Kaitlin Romey, Curatorial Assistant, Rosemarie Fusco, Collections Assistant, and student interns from Florida Gulf Coast University and the University of Florida, Bell expects to complete the rehabilitation by June 2018, if not sooner. In addition to providing the team necessary to carry out the project, the MIHS has committed to matching up to $2,034 of its own funds for archival supplies. The MIHS maintains its own collections on the Marco Island Historical Museum campus, one of five museums in the Collier County Museum system.

Bell is proud of the grant’s implications for the MIHS. “It is a tremendous honor to receive a Preservation Assistance Grant from the National Endowment for the Humanities,” Bell says. “For the small staff at the Marco Island Historical Museum, which opened in 2011, it is an affirmation that the museum is growing and professionalizing in accordance with accepted standards and best practices. We are ecstatic that this important collection of archeological materials will be properly preserved for generations to come.”

According to the NEH, Preservation Assistance Grants “help institutions —particularly small and mid-sized institutions— improve their ability to preserve and care for their humanities collections, including special collections of books and journals, archives and manuscripts, prints and photographs, moving images, sound recordings, architectural and cartographic records, decorative and fine arts, textiles, archeological and ethnographic artifacts, furniture, and historical objects.”

On December 14, 2016, the NEH announced funding for 290 projects in 43 states, the District of Columbia, and Puerto Rico. $16.3 million in grants will support a variety of humanities-based research and programs. There were 78 Preservation Assistance Grants for Smaller Institutions totaling $441,537 awarded in 2016. The NEH typically funds less than 30 percent of all applicants to this program. The MIHS was the only such recipient in Florida and the only non-university organization in Florida to receive an NEH grant of any kind. It is the first federal grant awarded to the MIHS.

Any views, findings, conclusions, or recommendations expressed in this article do not necessarily represent those of the National Endowment of the Humanities.